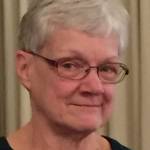 Arlyn was born in Crystal Lake (technically at Sherman Hospital in Elgin) as Arlyn Sherwood, the daughter of Archie and Anita Sherwood.

Her father's parents met and married in Woodstock where his mother taught in three of the rural Woodstock schools, between 1909 and 1917. Archie was born in Crystal Lake in 1925. Her mother's family moved to the Harvard area about 1932 and then to Crystal Lake in 1937. She worked for Nunda Township for 30 years and was a friend of the McHenry County Historical Society.

Arlyn grew up on the east side of Crystal Lake, attending Immanuel Lutheran grade school and then Cary-Grove High School, in the days before Crystal Lake South High School. She earned a bachelor’s degree in English from Valparaiso University and then her library degree at the University of Illinois Urbana-Champaign. She worked summers and during vacations at the Czecho Lodge.

After library school, she moved to Springfield to work at the Illinois State Library for the Secretary of State. Arlyn retired in June 2012 after more than 40 years at the library working in reference and maps. After her husband, Ralph, passed away in May 2013, nothing was keeping her in central Illinois so moved back home in October 2013.

Since more of her family was in Marengo, she moved there and immediately began volunteering at the Crystal Lake Historical Society, McHenry County Conservation District, Illinois Railway Museum’s Strahorn Library, the Marengo-Union Library District and at the McHenry County Historical Society. During the past few years she and fellow board member Maggie Crane accomplished many projects within the museum’s research library.

"I still am learning how much is here, and how much still needs to be done," Arlyn said. "I continue to get re-acquainted with McHenry County."