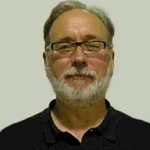 Don has served as an MCHS volunteer since 2008 and joined our board in 2011. He coordinates our use of technology and provides support in other areas. He remembers visiting the museum in the 1970s and ’80s.

He retired from Follett in 2003 after more than 20 years helping school and special libraries throughout the U.S. automate their collections. Earlier, in the 1970’s and 80’s, Don was a working photographer, later owning a photofinishing center and camera shop called Photocom - The Photo Experts in Crystal Lake. It housed a commercial studio, rental darkrooms and a small photographic museum located in what is now the Wickham Interiors building. Don also started what is now the Crystal Lake Camera Club.

Don has been involved with many organizations over the years, including the Society of American Archivists, Certified Photographic Counselors, Chicago Area Photographic Collectors, Boy Scouts of America, American Library Association, Chicago History Museum, Museum of Science and Industry, Lake County Discovery Museum, Photopeople, Applepeople, Macadamia and is past President and Director of the Northwest Area Arts Council.

Don is an award-winning photographer and has published articles related to photographic preservation and technology progress. He consults in these areas. He also is co-owner of Bulldog Antiques in Marengo.

Don was attracted back to our historical society by the opportunity to help educate residents about the significance of local history. His wife, Tracie, served on the McHenry County Historic Preservation Study Committee with Nancy Fike, working to create the MCHP Commission in the early 1990s.

He’s energized by our educational potential, our great core of volunteers and the care our staff takes along the way.