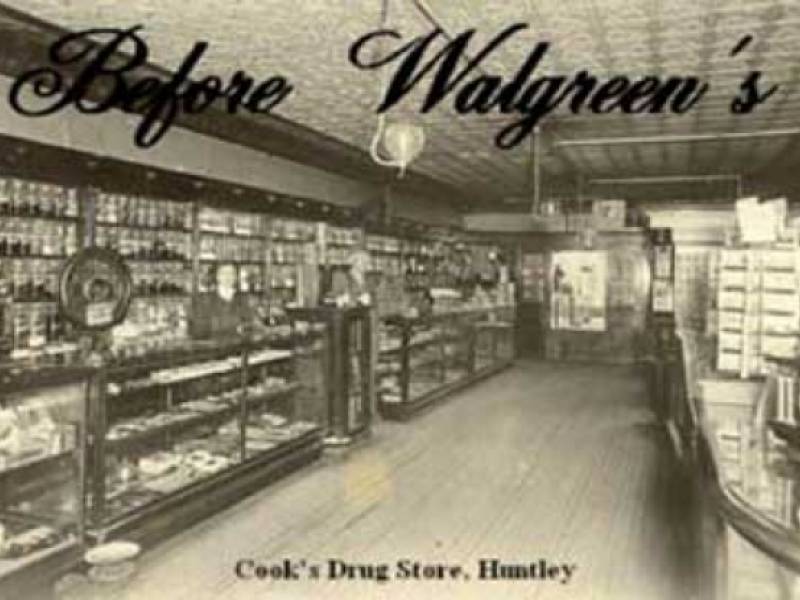 The small independent drug store has disappeared along with the remaining “independents.”

Richmond once could boast the location of “Mc Henry County’s largest drug store.” Today we have to drive a distance to get a prescription filled.

A drug store is one greatest need. In the 1920’s, Wm. O’Brien was a friendly registered Pharmacist firmly established on the southwest corner of Main and Broadway. He was proud to be “McHenry County’s largest drug store. Besides the soda fountain and cigar case, Mrs. O’Brien displayed watches, jewelry, perfumes and cosmetics in glass floor cases. Kodaks’ Box Cameras and various other types were available as well as film. Patent medicine lined the wall shelves. In April 1924, Mr. O’Brien had placed an ad in the N.A.R.D. for an apprentice. His present employee was leaving. A letter addressed to William Toppen, Galesville, WI, dated April 29th 1924, asks him to come as soon as possible.

Mr. O’Brien described the Richmond location as a “lively resort town”--600 population on a direct route from Chicago to all the southern Wisconsin lakes, especially mentioning Lake Geneva. Wages were $25.00 per week to increase as “soon as a man can show me he is entitled to a raise.”

Bill Toppen came on the 10th of May. He worked for Mr. O’Brien and commuted to the Chicago School of Pharmacy to become a registered Pharmacist. Upon Mr. O’Brien’s death, “Bill” as he was soon known, owned the Pharmacy. He partitioned the building making the dug store one half the size for retail space. The other side was rental property at one time housing the Public Library and then insurance offices. As of 2006 the building had been restored by the Hollenbechs for Antiques on Broadway. The Toppens moved the soda fountain to the rear of the store. Three booths were added. Three round glass top display tables with chairs fitted neatly in the space in front of the fountain. Luick Ice Cream was delivered from Racine, WI. Mrs. Toppen’s Bittersweet chocolate syrup became the top favorite for sundaes. She made this secret recipe in the far back room of the store.

Two malted milk machines turned out really thick malts and milk shakes. Green River and cherry syrup were dispensed from gallon jugs. Coca Cola syrup and root beer were dispensed from their own ceramic containers. All at five cents for a small glass -- ten cents for a large. Strawberry, chocolate, butterscotch, marshmallow, and pineapple were available for sundaes. The seltzer faucet made the soft drinks as well as ice cream sodas. Everyone had a preferred Coca Cola additive – chocolate, lemon, cherry, and Green River was available. After the Catholic Church Masses on summer Sundays, the soda fountain was packed.

n my junior year in High School, Mr. Toppen asked me to be his clerk. I was happy to leave my Relief Operator job with Farmer’s New Era Telephone Company. In 1938 he was grooming me to get my Apprentice Pharmacy License. This would enable me to help him in the Pharmacy.

Filling prescriptions at this time was very different from modern times. Most everything had to be made or mixed—I watched with fascination as Bill dissolved sparkly crystals on the slab to make an ointment. The mortar and pestle mixed for the capsules. I started out by typing the labels, but soon I was allowed to fill the capsules. This was a very exacting labor—each capsule filled and weighed exactly. No leftover powder and no short weights when you finished. I felt very proud to do this. This, of course, was under his supervision.

After Public Service Electric Company closed their office on Main Street we collected the bill payments. Reports had to be sent in daily. A crew of service men answered all the “trouble calls” reported to us. Our phone was really busy after a thunder storm.

The Greyhound Bus made four trips north and four trips south. Drivers drove from Chicago to Mauston, WI and then back after a layover in Mauston. They were signaled to stop if we had a passenger. This was done by pulling a light string inside the store that made a light flash outside. We sold tickets to any destination in the states and it often was difficult to determine fares. It was always routed through Chicago or Madison. Bus reports were made and sent to Greyhound every month.

The wall shelves were lined with Patent medicines for man and beast. Lydia Pinkham, Dr. Caldwell’s Syrup of Pepsin and Sloan’s Liniment were examples. We had Worming Medicines and Udder Balm for four legged creatures of the farm. First aid included Mercurachrome, Iodine, bandages of all sizes, gauze, cotton, adhesive tape, corn plasters, toothache remedies, ready made mustard plaster for the chest. Along with cough syrups and cold remedies—we could fix anything. Bayer Aspirins, Anacin and Ex Lax and various pills like Dr. Sloan’s Diuretic and somebody’s Bilious Pills filled the drawers with small boxes of paper or tin. All personal hygiene products were discreetly displayed. Male customers always requested that Bill fill their needs.How times have changed!

To the front of the store, there were cigarettes—Lucky Strike, Camels, Philip Morris—tipped and non-tipped—by the package or carton. A floor case of cigars—expensive Perfecto Garcia were 2 for 25 cents, Harvester, King Edward were 2 for 5 cents and several more. The wall case held Velvet, Prince Albert, Raleigh and Plow Boy tobacco for pipes—Corn Cob pipes and Grabow Filter Pipes were on display. Copenhagen and Seal Snuff with Beech Nut Chewing Tobacco shared the cigarette display. The Double Kay Nut Machine stood next to the cigar case. It was heated by two large light bulbs. The nuts were warm and fresh—a freshly toasted taste for two kinds of peanuts, cashews and mixed nuts. The large display case for candy held all the favorites. Candy bars and gum were a nickel. Baby Ruth, Butterfinger, Mounds, Milky Way, Charleston Chew and Musketeers to name a few. Black Jack, Wrigley’s, Famous Three and Pepsin Chewing gum and Life Savers filled the top shelf. Penny candy was found on the very bottom shelf.

A large magazine rack was across from the cigars. Life and Look were the big sellers. For the searchers for romance, True Story and True Confessions filled the bill. Comic books were having a hey-day. One young lady, dressed in boots and cowboy hat always spent the time looking for Gene Autry Comics. She had a real crush on Gene Autry. Wall cases on the east side of the store were displaying special gifts and cosmetics. Armand Face Powder and Rouge along with Coty products were favorites of the day. Tangee and Coty Lipstick and Cutex Nail Polish were popular.

Christmas shoppers found gift sets in fancy wrap from Evening in Paris and Coty, Dresser Sets, Manicure Sets, Compacts and jewelry. All suggestions for a gift for that special someone. For the gentlemen we had shaving sets, billfolds and cuff links with tie bars. Graduation gifts were found in Sheaffer and Parker Pen Sets and jewelry. We had a card case that held a card for every occasion. The cost was 25 cents to 75 cents.

Baby gifts filled one case—compete from baby books to bootie and sweater and cap sets. Baby cups and spoons sold separately or in a gift set with an ABC plate. There were three large display windows to be trimmed. Crepe paper worked magic. Mrs. Toppen soon delegated that job to me. She taught me to make the crepe paper wings that framed the products displayed in the window. Displays were changed monthly. I enjoyed this task too.

I remember being at the store working on that fateful day, December 7, 1941. It was a dark, dreary late Sunday afternoon. Mr. Toppen was seated at his desk in the pharmacy department listening to the news report. A reporter, named Paul Harvey, came on with the bombing at Pearl Harbor. Anyone who heard that news remembers the impact it made.

My worst fears were realized. I was engaged to be married—no date set. Phil had received his draft notice. The wedding date depended on his call to serve. We were married January 4, 1942. He left on March 2nd. I continued to work all the time he was gone. He returned from the South Pacific in June 1945 to study another type of aircraft engine. He was to return to his Pacific base in August. I went to Williamsville, New York to spend the summer with him. This ended my eight years of pleasant work at the Drug Store.

I shall always remember Nellie and Bill Toppen as two of my dearest friends. I learned much from my exposure to people and a business. I’m glad I have known an old-fashioned drug store, serving our community in the friendliest manner, day in and day out. by...Irene Borre