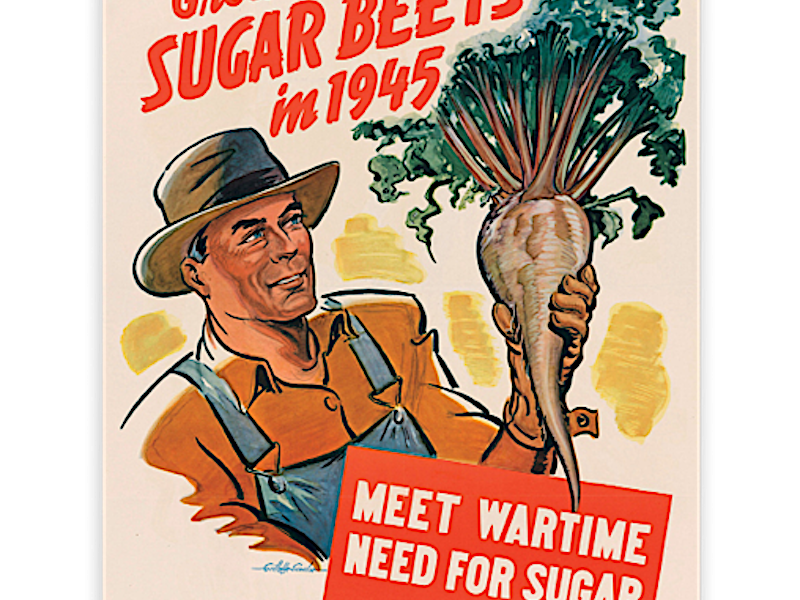 The McHenry County Division of Transportation is sweet on winter in a big way … sugar beet sweet.

Used since 1995, the county DOT slowly has championed a salt-free diet – as much as possible. Maintenance Superintendent Ed Markison said that during all but the iciest of storms, county trucks use a combination of 80 percent salt brine and 20 percent sugar beet juice. County trucks are equipped with 1,000-gallon tanks of the ice-melt mixture.

The idea of applying fermented sugars to roadways is an old one. Legend has it that Hungarians living near a potato vodka distillery noticed that a nearby brook, into which wastewater was discharged, never froze. The idea led to the use of everything from spent beer brewing mash, cheese and pickle brine, sugar cane and corn syrup; and even molasses.

Back in the day, if you wanted goods and customers to reach you, you had better clear the street in front of your store. We progressed from legions of show shovelers to the use of snowplows in the mid-1800s – first pulled by teams of horses and later mounted on steam engines and streetcars. Motorized plows could be seen in some cities as early as 1913. Steam shovels, cranes and railroad flatcars were used to transport snow for disposal in nearby rivers.

Elevated tracks, such as Chicago’s “L,” bypassed drifts, but people still had to get there. Even in the 1880s, people tried to avoid using salt by using sand and cinders. But that didn’t eliminate the ice beneath it. Fleets of mechanized salt spreaders were dispatched – leading to corroded cars and bridges, and litany of environmental ills ranging from fish kills to burned vegetation to contaminated drinking water.

According to the McHenry County Water Resources Division, up to 90% of the salt used in deicing can enter air, soil and water table. About 55% of road-salt chlorides are transferred in surface runoff, where it affects aquatic life living in streams and lakes. The remainder seep through the soil into underground aquifers, hindering the ability of plants to absorb water and grow.

Walt Kelly, a groundwater geochemist with the Illinois State Water Survey and head of the Groundwater Science Section at the University of Illinois, said a major melt can cause a spike in chloride discharge, raising salt levels in nearby waterways up to 1,000 parts per million gallons. The average is a quarter of that, he said.

North America’s freshwater lakes are getting saltier due to development and exposure to road salt. A 2017 study of 371 Midwestern and Northeastern lakes by the Cary Institute of Ecosystem Studies of New York, found some 44% of lakes sampled were experiencing long-term salinization. The Environmental Protection Agency reported that more than 600,000 tons of chloride are added to Lake Michigan each year.

“We want to stay away from chlorides as much as possible,” Markison said.
Plus, beet juice saves taxpayers money. He can buy sugar beet juice for $1.60 a per gallon, or $51.20 per ton. Salt cost about $99 a ton.

“Chloride levels in wells are leveling off. Trained applicators are using brine instead of rock salt and applying less. It’s something we call sensible salting,” Kelly said. “But the wild card in all this is private applications; on parking lots, sidewalks and access roads.”

New Hampshire became the first to use salt on the roads over the winter of 1941-42, but following World War II, the practice grew in tandem with the interstate highway system.

“The bare-pavement concept, under which motorists could expect snow- and ice-free pavements shortly after storms, soon became a policy in most cities and their suburbs,” according to a report by the National Academy of Sciences. “As a result, salt use doubled every 5 years during the 1950s and 1960s – growing from 1 million tons in 1955 to nearly 10 million tons less than 15 years later.”

Another day, another box truck crashing into Long Grove’s historic bridge. Fitting the latest incident happened on the eve of Groundhog Day.

Since the iconic 1906, Pratt-truss bridge was added to the National Register of Historic Places in June 2018, 13 vehicles have run into it – despite the warning signs, despite even bystanders attempting to get these knuckleheads to stop. Fortunately, the latest incident resulted in only cosmetic damage.

Long Grove should take a page from parking garages, or perhaps from a railroad engineer’s handbook. Railroads erected “tell-tales” before tunnels and bridges – U-shaped structures from which ropes were suspended – in order to warn crew members on top of the cars that a low obstacle was ahead.