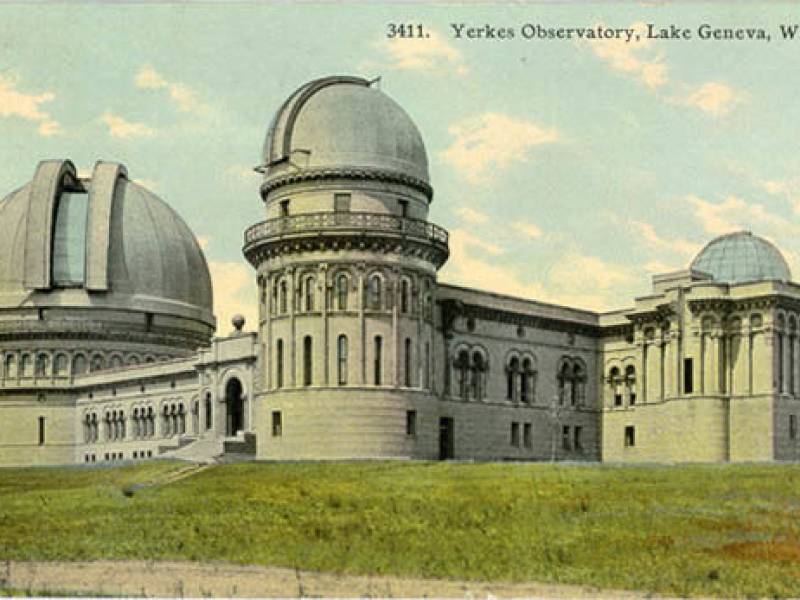 Hearings are underway in nearby Williams Bay, Wis. concerning the fate of a star-studded piece of historic architecture:the Yerkes Observatory.

Closed for two and a half years, the University of Chicago transferred ownership of the historic building and picturesque grounds to a nonprofit foundation in May. The university has owned the observatory since 1897.

The university donated the observatory, several telescopes and 49 acres near Geneva Lake to the Yerkes Future Foundation – created in 2018 by a group of local residents. The foundation intends to reopen the observatory for research, educational programs and events. It hopes to begin public tours later this year, depending on fundraising and the ongoing public health situation from COVID-19.

The university and the foundation also agreed to several long-term loans of U of C's astronomical equipment, including a collection of glass plates, books, pamphlets and other artifacts.

The foundation will receive an undisclosed amount of seed money from the university in order to make badly needed repairs to the exterior brick, wood floor and equipment – including a 20-ton refractor telescope with a 40-inch lens and 63-foot tube.

It has enlisted the support of local, state and national experts in areas of telescope refurbishing, brick and masonry work, wood restoration, landscaping revitalization, electrical wiring, server support and more.

The permit application notes: “…We [foundation] developed a collections policy, are examining additional instrumentation needs for the telescopes, are talking with local and national colleges and universities regarding on-site seminars and research and are developing the profiles for hiring staff. It is a daunting but necessary process so we can identify the needs of the building and associated costs.”

An additional cash donation is planned from the sale of lakefront property the university owns – pending approval by the village. The university wishes to rezone three parcels, totaling nearly 9 acres, into three, single-family lots.

A pedestrian easement will run the length of a 4.5-acre lot, maintaining the existing lakefront path. Future subdivisions of the property are prohibited. It also to secure additional on-site parking and permission to host weddings, receptions, educational programming and star viewings.

“It is not the intent to turn the observatory or grounds into an event facility," the foundation notes, “but rather to use it sparingly in that regard.”

The two houses on site will be renovated and used as housing for guest speakers, students and scientists.

The foundation is asking Williams Bay and other nearby communities to encourage homeowners to reduce exterior lighting or shield it so that it faces downward. This reduction in light pollution will assist in using telescopes.

Want to know how bad light pollution is around your house? Grab the kids and head out some night into the back yard. You can help quantify the effects of increasing light pollution using your smartphone. For information, visit globeatnight.org.

The observatory was home to the university’s astronomy and astrophysics department from its opening until the department began relocating to Hyde Park in the 1960s.

“We are a small, community-focused foundation, but our ambitions for Yerkes are not only local and regional, but national and international,” YFF chairwoman Dianna Colman said in a written statement. “Thanks to the University of Chicago and its many Yerkes employees and scientists through the years, Yerkes has been well-maintained, and our goals include enhancing the magnificence of its structure, telescopes and grounds to continue its historic tourism appeal, and to maximize its educational and scientific potential as a forward-looking inspiration to generations of young scientific hopefuls.”

At a time like this, amid all of the civil unrest, it is tempting to attempt writing something pithy. But what’s really called for is not flowery language or high-handed reproaches for what should or could have been done in the past.

Rather, it is about moving forward. Finding an acceptable way to address the conflicting ideologies that tear at this nation’s fabric. It is ironic that that shortly after the last Civil War pensioner died in North Carolina on May 31, demonstrators tore down a statue of Confederate Gen. William Carter Wickham in Richmond, Va.

Irene Triplett, 90, received a monthly check for $73.13 from the government in recognition of her father’s military service. Mose Triplett, who fathered his daughter at age 83, initially fought for the Confederate Army before deserting to the Union side.

Just goes to show you that people can change.

Years from now, when even the most erudite among us struggles to recall the name George Floyd and the police conduct that set America ablaze, will we – at the very least - recall the message?

Will anything have changed? There have been many impassioned protests over gun violence, environmental degradation, violence against women, child labor, immigration, sex trafficking, historic preservation, unfettered government spending, taxes and health care … to name a few. We certainly have taken baby steps in many of these areas, but you’d be hard-pressed to enumerate systemic changes.

So here we are, in a place a friend characterizes as the “messy middle.” The challenge is finding an acceptable path out. Might the first step be getting to know one another better?

More than 50 years after the Fair Housing Act of 1968 outlawed housing discrimination on the basis of race, sex, national origin and religion, segregation persists. According to the advocacy group National Community Reinvestment Coalition of Washington, D.C., nearly three quarters of the neighborhoods it designated as high risk are inhabited by the poor. And 64 percent are minority neighborhoods.

Last year, the financial news company 24/7 Wall St., designed the Chicago/Naperville/Elgin area as the fourth most segregated area in the country. It is just behind Niles/Benton Harbor, Mich. and immediately ahead of Albany, Ga. The most segregated city in America is Pine Bluff, Ark., followed by the Detroit area.

The report blames such things as exclusionary zoning, disparities in income and education, discriminatory zoning practices and racially restrictive housing covenants, and unemployment.

Got a second? It seems older clocks, like those on your microwave and VCR (wait, did I just say that?) may be losing or gaining a few seconds over time.

According to the Associated Press, electric clocks keep time based on the typically stable and precise pulses of the electric current that powers them. In the U.S., that’s 60 hertz (cycles per second).

In the past, regulators required power companies to immediately correct the rate if it slipped off the mark. But because of the expense, last year the Federal Energy Regulatory Commission quietly eliminated the requirement.

What has been a random second or two, could amount to as much as seven and a half minutes between time changes in March and November, when people reset their clocks, according to a study conducted by researchers at the National Institute of Standards and Technology and the U.S. Naval Observatory.

So don’t complain if that Zoom meeting or train is a minute or two late. It actually might be early.

Operations at the McHenry County Historical Museum will begin a gradual return to normal with the expected move on June 26 to Phase 4 of the Restore Illinois plan. Watch our website and Facebook page for details. Remember to share your COVID-19 experiences on our website at gothistory.org.

* Kurt Begalka is administrator of the McHenry County Historical Society & Museum. He may be reached at kurt@mchenrycountyhistory.org.