"Will You be mine" stands the test of time

Home » "Will You be mine" stands the test of time 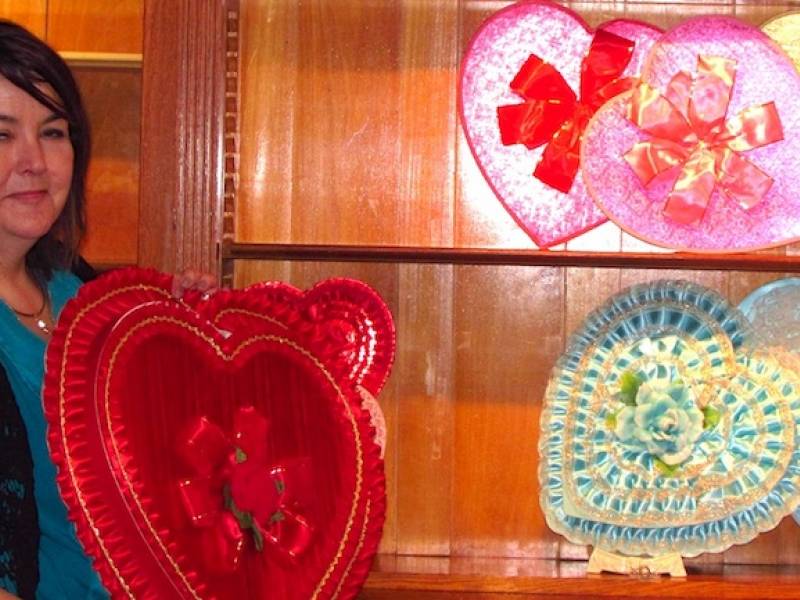 "Will You be mine" stands the test of time

Published in the Northwest Herald on Sunday, Feb. 14

Shel Trost never thought she’d be sweet on Valentine’s Day, but then the McHenry resident received one of the “more plain red” heart-shaped candy boxes from her husband and daughter about 20 years ago.
It didn’t take long for Trost, who never had received a candy heart box before, to be smitten. Soon after, she found an older box from the 1950s in a Wisconsin Dells’ antique shop and the rest – as they say – is history. She revels in all of the textures, colors and creativity.
“It’s everything about them,” Trost said of her collection, which now numbers between 70 and 80. “I’m not a frilly person, but I can do this without wearing it.”
Many of the finest examples from her collection will be on display at the McHenry County Historical Society & Museum in Union. They are part of the society’s annual “Members Only” exhibit on display during the 2016 season.
Members, even those joining the evening of March 18, will be able to get a sneak peek at Trost’s collection and those of seven other hobbyists from 5:30 to 8:30 p.m. that Friday.
Other collections on display include Midgetoy die cast toys; pewter; vintage kitchen utensils; Woodstock library memorabilia; bar coasters; pattern glass; Mason jars; glass bottles; memorabilia from Immanuel Lutheran Church’s 145th anniversary in Crystal Lake and collectibles from the Chicago & North Western Railroad’s archives.
But, of course, Trost’s “kitchy” collection can’t help but tug at one’s heart.
“The oldest ones in the cabinet are from the late ’20s and early ’30s, and are worth between $85 and $165,” Trost said. “On eBay, I used to be able to buy three middle-of-the-road empty heart boxes for $10 with shipping. Now the lowest priced are $7 to $10 each – plus shipping.”
The rising cost and storage space prompted Trost to curtail her collecting five years ago, but if she had an opportunity to buy one of the early Cadbury hearts – the ones children used to cut the lids off and save in scrapbooks – she would have to give it serious consideration. John Cadbury’s tea and coffee shop in Birmingham, England, posted higher sales starting in 1861, when his son, Richard, began packaging the famous chocolates in heart-shaped boxes for Valentine’s Day.
After the candy was eaten, the elegant boxes could be used to store mementos, buttons or pictures. Bows, lace, cupids, satin, velvet and flowers have decked out chocolate boxes since, courtesy of companies that range from the well-known – including Brach’s, Fannie May and Russell Stover – to the obscure, such as Puritan Candy Corp. of Milwaukee or the Elmer Candy Corp. of Ponchatoula, Louisiana.
It all is part of the cachet that is Valentine’s Day. An estimated 131 million Valentine’s Day cards are exchanged each year – second only to Christmas for the greeting card industry. Hallmark first offered Valentine’s Day cards in 1913 and began producing them three years later.
Esther Howland of Worcester, Massachusetts, is thought to be the first mass producer of Valentine cards in this country, starting in the 1840s. Valentines were around even earlier, cut by hand from folded paper with pen knives and decorated with pin pricks and paint long before Howland added die-cut flowers and gilt paper trim.
Nancy Rosin, president of the 40-year-old National Valentine Collectors Association in New Jersey, said Valentine’s Day ephemera has a magical quality that connects generations.
“Hopefully people don’t want the instant gratification of an email valentine,” Rosin said. “There is nothing to cherish, nothing tangible. I know people who have inherited valentines from their grandmother or mother. I try to convince them of their sentimental value.”
Besides the aesthetic value, Valentine’s Day memorabilia often contained many unspoken messages, conveyed in the “language of flowers.” There also was an undeniable social aspect, allowing a woman in pre-suffrage times to express her love overtly … and for a man to do so covertly.
“In the old days, a sailor would carve a bust made of whale bone that a women would insert in her corset,” Rosen said. “That way she would remember him always because it probably was very uncomfortable!”
Historic Valentine’s Day gifts are a time capsule of the “most personal and intimate communication between people,” Rosen said – punctuated with locks of hair or pieces of familiar fabric. “I like the handmade things made before the manufactured era, the affectionate handmade things such as Civil War valentines from a soldier wanting to come home. … It’s a recording of everything going on in our lives.”
And, this is the best part: The friendship and affection these baubles and bows convey is timeless.
“I think love is here to stay,” Rosin said. “Love is that intangible; the emotion that inspired everything from great art and poetry to wars. It’s such an important thing. We need to honor it.”