Trains brought “our boys” home, could be on track to take you places

Home » Trains brought “our boys” home, could be on track to take you places 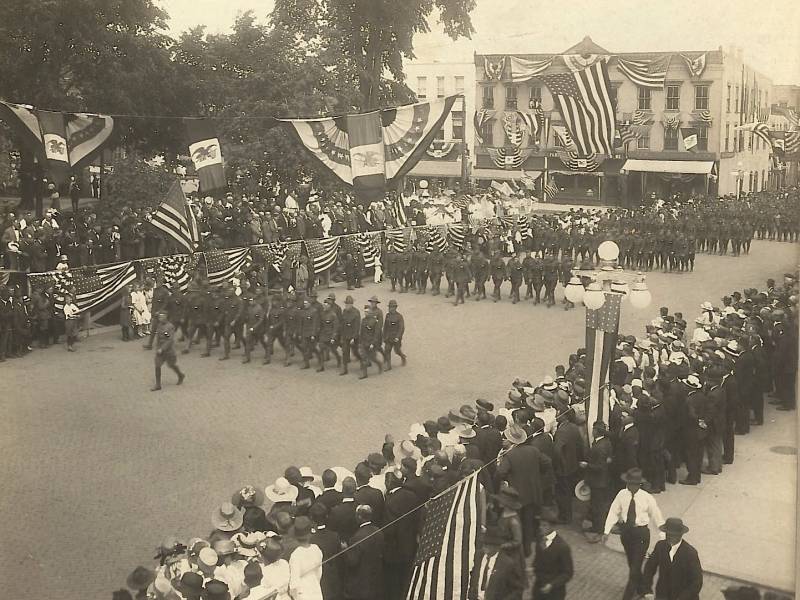 Trains brought “our boys” home, could be on track to take you places

Cutline: The parade on June 10, 1919, in honor of Company G troops returning from the Great War, drew a crowd of more than 15,000 to the Woodstock Square.

The Midwest High Speed Rail Association is advocating for a “fast-track initiative” that would create a network of reliable passenger trains branching out from Chicago. It estimates that $233 million will be needed to extend service through Elgin and Huntley to Rockford by rebuilding the Union Pacific tracks and connecting it with the Metra Milwaukee West tracks at the Big Timber Road station.

The project would use existing rail – the old Black Hawk line, formerly owned by the now-bankrupt Illinois Central, on which Amtrak offered passenger service in the 1980s.

Huntley already has spent money on design plans for a train depot and parking lot on village-owned property at Main and Church streets. The village bought the former H.D. Catty Corp. building at 11117 S. Church St., for $435,690 in February 2017. It presently is zoned for manufacturing. Over the years, the building housed dairy and brewing businesses, an implement dealer and gasket company. Why not a train station?

Preservationists, including the McHenry County Joint Council of Historic Groups, are advocating that the city repurpose at least a portion of the 33,100-square-foot brick structure for a depot. The challenge – no shock there – is there are more needs than money. Still, the timing could be fortuitous. Gov. J.B. Pritzker recently unveiled a six-year, $41.5 billion plan to repair Illinois’ crumbling roads, bridges, public schools and university buildings. The first domino in this “Rebuild Illinois” initiative fell in mid-May when House Democrats advanced a $2.44 billion plan – paid for with increases in gas taxes and vehicle registration fees.

But as Illinoisans know all too well, spending the money where it should be spent can be tricky. There are many competing interests and if southwest McHenry truly desires rail service, it must be prepared to lobby in a loud and united fashion. Amtrak to Huntley is hosting a public meeting from 6:30 to 7:30 p.m. Tuesday, June 4, at the Huntley Area Public Library, 1100 Ruth Road. Find out what you can do to restore passenger rail service to this underserved portion of the county – and transform a historic building into a viable, tax-generating business hub.
•••
I find it interesting that with hardly a hiccup, the Illinois General Assembly approved a November 2020 ballot question that will ask voters to scrap the state’s constitutionally protected flat income tax and replace it with graduated tax rates.

The Illinois Constitution of 1970 may be amended via a constitutional convention, amendments by our elected officials or ballot initiatives. However, historically, two other constitutional questions Illinois voters desperately want have failed to gain political traction … let alone mustered the Legislative votes needed to appear on a ballot.

The proposed Fair Map Amendment would exclude partisan interests from the map-drawing process by assembling an independent commission. In a 4-3 ruling last year, the Illinois Supreme Court ignored 563,000 petition signatures and shelved plans for a statewide referendum that would have stopped gerrymandering. That is especially disturbing since the next federal and state maps will be redrawn in 2021, using 2020 census data that is sure to confirm Illinois’ dwindling population.

Lawmakers also have until May 2020 to put a referendum on the ballot to change pension rules that are crippling Illinois. Rejected reforms in 2013 would have protected the pension benefits already accrued while changing how things worked moving forward. That would include things such as: increasing the retirement age, capping maximum pension-qualifying salaries, tying benefit increases to the cost of living and implementing a 401(k)-style retirement plan … you know, like the rest of us.

“Illinois spends the most in the nation on pension benefits at the state and local levels, as a share of all government spending,” the Illinois Policy Institute concluded. “The Land of Lincoln has the worst pension debt-to-revenue ratio of any U.S. state ever recorded.”

Amid the rush to legalize pot, legalize and expand gambling and jack up taxes and fees, the Illinois General Assembly should take the historic step of maybe … just maybe … reduce expenses.
•••
Join the Colby-Petersen Farm Foundation and the McHenry County Farm Bureau for the annual Day Out at Petersen Farm from 10 a.m. to 4 p.m. Sunday, June 23, at 4112 McCullom Lake Road, McHenry.

Activities include pioneer games and crafts for children by the McHenry County Historical Society, farm animals, hayrides, an antique farm tractor display, crafts, textile demonstrations and blacksmithing. The main floor of an 1862 farmhouse will be open for tours and music will be provided by Cheryl Niemo and the Down Home Boys.

The city acquired the farm, with its outbuildings and oak savannah, to preserve our agricultural heritage. The Colby-Petersen Farm Foundation has been established to assist in maintaining and developing the property. For information call 815-344-2748.
•••
The post-World War I era was a scary precursor to what is happening today. It was a time of isolationism, suspicion of foreign-born citizens, concern over civil rights and voting access, and worries about Russian influence. Sound familiar?

Join the McHenry County Historical Society’s Perkins Players for the free, interactive 1919 historical drama, “Keeping the Peace Down on the Farm,” at 7 p.m. Wednesday, June 6, at Perkins Hall, 3600 Franklinville Road in Woodstock. Doors open at 6:30 p.m. and refreshments follow. For information, visit www.gothistory.org.

Published June 2, 2019, in the Northwest Herald