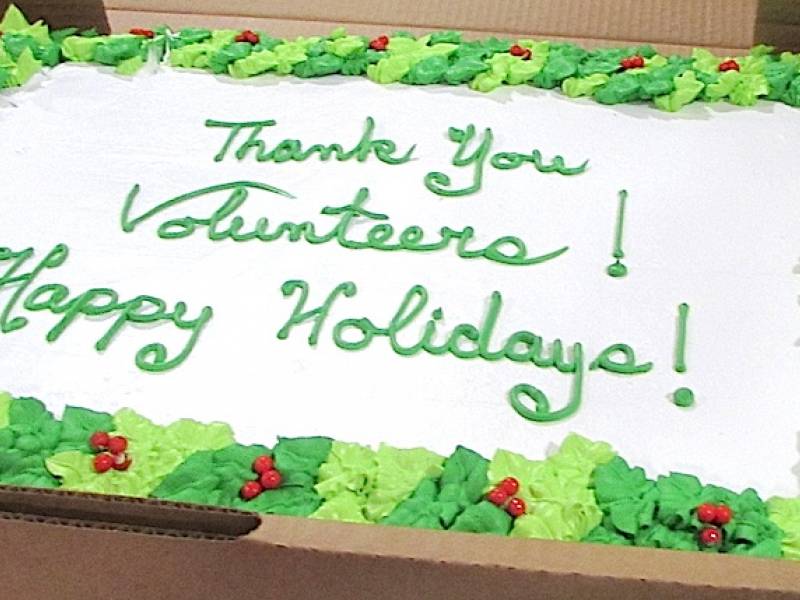 Dyzart named "Volunteer of the Year"

About 100 volunteers packed into Eckert Hall Dec. 7 for the annual Volunteer Thank You Lunch.

The event featured entertainment by the Knock on Wood Clarinet Choir (www.facebook.com/knockonwoodclarinetchoir), games organized by Membership/Volunteer Coordinator Kim Borgerson, an address by board President Mary Ott (with a moment of silence honoring those who died in the attack on Pearl Harbor, prize drawings and a trivia contest.

"Volunteers are the glue that binds this organization together, the swizzle stick in our drink. Or, as Nat King Cole put it (with a little artistic license):

The cream in our coffee

The salt in our stew

You will always be a necessity

We’d be lost without you

In all seriousness, volunteers are the most important resource community organizations have. It would be impossible for this organization to accomplish all of the good works that it does with concerned individuals like you working alongside staff.

So today, during this holiday season, we wanted to pause and make a point of thanking you for everything you do. Know that your good deeds have not gone unnoticed that you do make very real difference in advancing our mission of historic preservation, education and advocacy.

Volunteer of the Year Introduction

"I was trying to think of ways to describe this year's Volunteer of the Year, when I had an epiphany. Since we all know actions speak louder than words, I decided to let the facts speak for themselves?

Those of you who have seen my office, know that I have a tendency to keep more things than I probably should.  But in this case, by email outbox offers just a glimpse of the many things Bill Dysart has done – and continues to do – for this organization:

• Assuming it is not raining tomorrow, could you remove the White Elephant signs from Schuette?

• We've been having some electrical issues, which I think could be related to that outlet we put up in the library. It has no power to it. Second, the dehumidifier downstairs seems to be overloading. Could be connected ... or not.

• Kira needs a Plexiglass covering removed from a display case upstairs. I also wanted to talk to you and Bob Lee about those big cabinets and how to take them apart.

• My wife saw one of these tiny black "bees" with white stripes drilling its way into the back of the cabin. They are too small to be carpenter bees. Have we encountered them before?

• In addition to the bus we have an electrical issue. The outlet that you guys put in over the scoreboard wall is no longer working. The exit light that you tapped off of, however, remains functional. Not sure what happened but the it is dead and we're having to run the router off an extension cord.

• The emergency light above the visitors' entrance will not be quelled. I think more invasive surgery might be called for.

• Please add replacing fluorescent bulbs in the stairway to cold storage, to your "to-do" list. It's harder than usual to see where I'm going.

All I can say is it’s a good thing Bill is a retired engineer!

As near as I can tell, Bill has been volunteering here at the museum for 30 years. He and his partner in crime, Bob Lee, are our go-to Mr. Fixits. Got a finicky toilet? Call Bill. Heater won’t kick on in Perkins Hall, get Bill. Need yet another crazy display structure constructed. Bill is your guy.

And, if that were not enough, he also sings each Heritage Fair with Clef Hangers barbershop quartet. His past accolades include being named the Crystal Lake Chamber's Volunteer of the Year in 1996, the 2008 Illinois Association of Museums Volunteer of the Year, and a 2014 Everyday Hero. But he is perhaps best know as “Mr. July” in the Society’s infamous 2005 calendar.

Please join me in thanking your 2016 Volunteer of the Year, Bill Dysart." 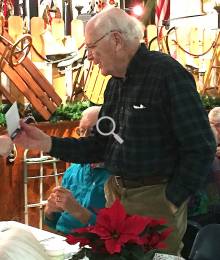