Temple has the “bones” to be an alter to our forbearers 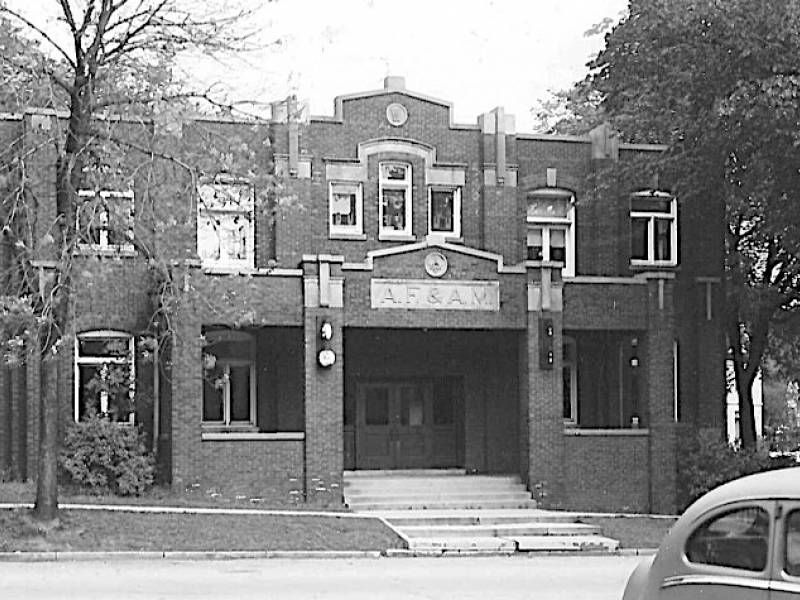 Temple has the “bones” to be an alter to our forbearers

“Witnessed by fully a thousand members of the fraternity, coming from Chicago and with a representation from practically all the lodges and Knights Templar commanderies in the city and villages of the surrounding territory, the laying of the cornerstone of Harvard’s new Masonic temple was performed last Monday afternoon precisely as planned.”

The article went on to describe the spectacle, which included more than 600 uniformed Masons in a parade, and performances by the Ingleside Quartet of Chicago and the Siloam Commandery Band. It also described the cornerstone-laying ceremony in great detail.

But the building’s current owner and Florida resident, Doug Mac Kenzie, did not want to hear about any of that. Earlier this month, exactly a century later on Labor Day, Mac Kenzie removed the copper time capsule and its contents for himself.

“We cleaved it a little bit and then made a slit. Using tin snips we made cuts on three sides [of the seam] and then peeled it back. There was some packing material – brown paper, like grocery bag paper – that looked so fresh. It looked like it had been put in a few weeks ago.”

Unfortunately, moisture – most likely from condensation, Mac Kenzie theorized – had gotten into the box and damaged the photos, which included 19 views of Harvard streets and buildings. Newspapers, documents and coins it contained also were harmed.

“They started to corrode,” Mac Kenzie said of the coins. The box contained a 1913 wheat penny and a 1918 Mercury dime, as well as buffalo nickel, Morgan silver dollar, quarter and a half dollar. The time capsule also included a Masonic Royal Arch chapter penny from Harvard. Mac Kenzie also discovered a trove of Masonic symbols: a plumb weight, level, square, carved wooden trowel, keystone and star.

Mac Kenzie said his suspicions of a time capsule were confirmed when a city official uncovered the aforementioned newspaper article. He plans on installing a replacement time capsule, also made of copper, on Sept. 6, 2020 – the year the building, itself, turns 100. The difference, Mac Kenzie insists, is that the new box will be vacuum-packed and watertight.

Due to material and labor shortages, the $47,000 temple did not open until Nov. 5, 1920. More than 400 members and friends attended an open house, which featured “cafeteria style” refreshments prepared by the ladies of the Eastern Star and dancing on a “specially prepared” floor.

“There were many expressions of delight over the arrangement of the room, it’s beauty and convenience for social purposes,” the Nov. 11, 1920 edition of the Harvard Herald reported.

Mac Kenzie bought the Harvard temple building, located at 66 N. Ayer St., in December 1999. By his own admission, he hasn’t done the best job keeping up with repairs. Still, Mac Kenzie insisted “bringing it back from the dead” will be a priority – especially because he would like to sell it and sever ties with Illinois.

“It’s an awesome building,” he said. “It would be nice to have it as a cultural arts center and a stained glass studio, perhaps a ceramics studio.”

The Sun City resident is putting her dollhouse and many of her handmade creations on display at Huntley Village Hall throughout October.

She embraced her hobby – more of an obsession, really – in 1982 when she and one of her three children set about restoring Helen’s childhood dollhouse, built by her father in 1950. The problem was the plastic furniture that accompanied it was in the wrong scale.

“It was three-quarter inches and now everything is 1 inch,” she said. “One inch equals a foot.”

Wiederkehr, 78, estimates she has about 30 miniature vignettes in her collection. She simply does not have space for more. Room boxes are her latest approach. She recently turned a vintage tomato basket, scrounged from one of her neighborhood walks on garbage day, into a backdrop for an intricate produce stand. It features miniature clay strawberries – complete with bumps created by rolling the clay over Velcro while its malleable.

“I’m good with my hands and I have a good imagination,” Wiederkehr said. “It was almost like a sickness for awhile. I had to make everything that came into my head. I can look at an old magazine and see a picture of a wooden chair in there, and reproduce it in miniature.”

Wiederkehr uses a myriad of tools, from tweezers to dental picks, to craft items out of basswood, plastic, glass, lead, fabric or some other bit of flotsam she repurposes or stumbles across. In her hands an unwanted plastic wagon became a peddler’s cart.

Wiederkerhr said she’s spent several months prepping for the display, which will available for the public to view from 8 to 5 p.m. weekdays at 10987 Main St. in Huntley. Make sure you keep a sharp eye out for a replica of her favorite cat, Merlin. Like magic, the black and white feline is tucked deftly into practically every scene.

In the span of two weeks next month, the McHenry County Historical Society is shosting two events and participating in a third.

Our 42nd Annual Cider Fest runs from 10 a.m. to 4 p.m. Sunday, Oct. 6, and features a bushel basket full of throwback experiences and hands-on activities for the family. And admission to the museum, located at 6422 Main St. in Union, is free. That is shadowed by our infamous “Historic Halloween – Return of the Dead” program at 7 p.m. Wednesday, Oct. 9; and the signature Autumn Drive Oct. 19-21 in and around the society’s Perkins Hall, at Franklinville and Garden Valley roads in Woodstock. Details on these events, as well as others, can be found at www.gothistory.org.

Published Sept. 23 in the Northwest Herald