Synopsis of the 2014 Sampler Series

Home » Synopsis of the 2014 Sampler Series 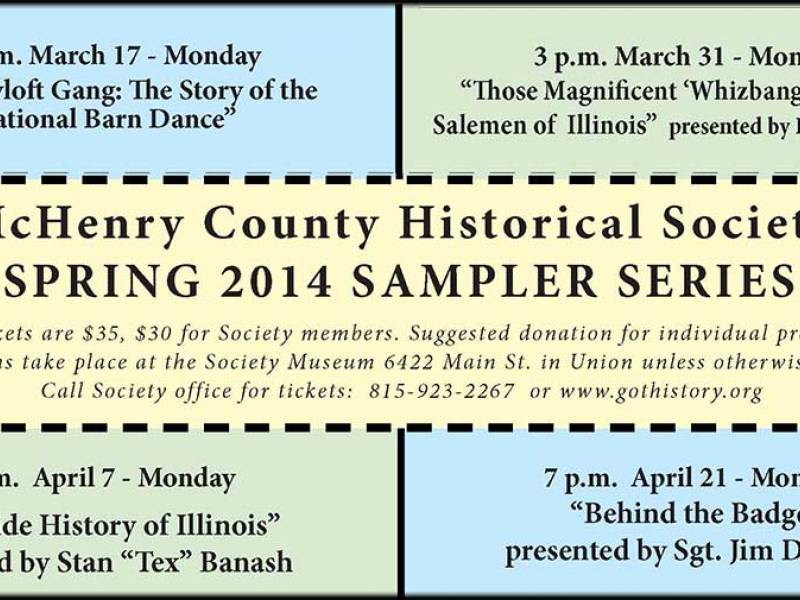 Synopsis of the 2014 Sampler Series

"The Hayloft Gang: The Story of the National Barn Dance" was presented by Steven Parry in the Trout Valley Barn, 167 Country Common Rd, Cary IL. This presentation was made possible by a grant from the Illinois Humanities Council. Attendees discovered the story of a changing America, told through the sound of early radio's most popular and influential programs - from its first broadcast in 1924 to it's last in 1960. Preceding the success of the Grand Ole Opry by nearly two decades, it made Chicago the capital of country music prior to World War II.

In 2002 Chicago’s Newberry Library contacted Ron Solberg to write lesson plans on a Chicago turn-of-the-century labor movement. The fledgling author, not all that surprisingly, gravitated toward something in his comfort zone: Retailing and traveling sales. After all, Chicago has been an important center for merchandising and retail activity. Solberg will touch on that pedigree when he presents “Those Magnificent 'Whizbang' Traveling Salesmen of Illinois”.

Solberg, 73, of Downers Grove, brought a salesman’s sample case full of items plus copies of his 2008 book: “The Whizbangs of Oohs and Ahs – America’s Salesmen: Their Lore, Lives and Laughs.” This special program was made possible through a grant from the Illinois Humanities Council.

Solberg moved to the Chicago-area and began doing corporate public relations and marketing for clients that included two high-profile sales associations: The Million Dollar Round Table, an association of insurance executives, and Institute of Real Estate Management. “I rubbed shoulders with some of the finest salesmen in the world,” Solberg said. He still applies many of the lessons he learned at that time at the independent Science & Arts Academy in Des Plaines, where Solberg teaches global studies to gifted children. Sales taught him to be a good listener and a good communicator. He learned to empathize with customers and more than a little about how to stand out in a crowd. For years, Chicago was the epicenter of sales – many of them door to door.

"Roadside History of Illinois" was presented by Stan "Tex" Banash of Norwood Park. His book covers the history of the state from the Ice Age to the present, offering vacationers, tourists and visitors a series of short trips mostly along old U.S. highways, state highways and county roads that provide a glimpse into numerous historic sites as well as the history of nearly 250 significant cities, towns and villages in seven geographical regions.

Corruption and mismanagement is not anything new in Illinois, author Stan "Tex" Banash explained to the crowd. The 1870 Macoupin County Courthouse in Carlinville had an original budget of $50,000 in 1870. What was the final figure after all of the amenties, including marble floors, a 600-seat courtrom and stunning silver dome? It took taxpayers 40 years to pay off the $1.4 million price tag.

Banash's book, "The Roadside History of Illinois," is full of such stories - some of which he shared with attendees. It turns out the "fly killer," turned swatter, was invented in 1900 by Robert Montgomery in Decator. And the steel plow was invented in 1933 by transplanted New Englander John Lane in suburban Homer Township. John Deere later patented the invention ... and took the credit, as it turns out, erroneously.

"Behind the Badge." Took a look behind the Dick Tracy comic strip with its technical adviser AMTRAK Police Sgt. Jim Doherty. Attendees learned about the famous detective's real-life role models and had an opportunity to buy a signed edition of Jim's latest book, "Just the Facts - True Tales of Cops & Criminals."

Jim Doherty has been stuck on good gumshoe stories since he was a kid growing up in San Francisco.

And at the top of his list was and is fictional detective Dick Tracy.

“I think the graphic images were very interesting. There was a style to it that was very gripping – a combination of cartoonish figures in a realistic setting,” Doherty said. “There was a primal appeal. When you think of our whole image of what a hardboiled detective is supposed to be like, it came from Dick Tracy.”

Doherty, an AMTRAK police sergeant who now serves as police technical adviser to the Tracy comic strip and caption writer for the Crimestoppers’ Textbook panels on Sundays, will speak at 7 p.m. Monday, April 21, at the McHenry County Historical Society Museum, 6422 Main St. in Union.

“Dick Tracy is the second most famous detective in any fictional medium whatsoever, behind Sherlock Holmes,” Doherty said. “He certainly is the most famous policeman; more famous than Joe Friday, Dirty Harry, Sam Spade, Phillip Marlow or Mike Hammer. And it is a piece of Americana that almost wasn’t. It got created by accident.”

Doherty said Woodstock’s Chester Gould submitted 60 sample strips to the then Chicago Tribune New York News Syndicate during a 10-year period before one was accepted. Doherty went through a similar apprenticeship.

He met celebrated mystery writer Max Allan Collins (Road to Perdition) at a mystery convention in California and Collins would reminisce about his friendship with Gould and about his experiences writing for the Dick Tracy strip before Naperville’s Dick Locher. Doherty later wrote a blog about the Tracy comic strip and collaborated with current writer Mike Curtis and artist Joe Staton on their own digital Tracy strip which ran on the “Plainclothes” website.

Plainclothes Tracy was the strip’s original title when Gould submitted it in 1931.

The Chicago resident also writes crime fiction, true crime, and critical articles about crime fiction and its history. His first book, a collection of true crime articles titled “Just the Facts – True Tales of Cops & Criminals,” was followed by “Raymond Chandler – Master of American Noir,” and “An Obscure Grave.”

Doherty credits the popularity of mysteries and true crime novels to more than a public fascination with “Who-dunnits.” They tell a story in a narrative prose that people enjoy, he said. And equally important, they tap into the historically compelling struggle between criminal behavior and justice.

“It is about one of the most primal conflicts there can be: A conflict between good and evil,” Doherty said.

The Sampler Series will return in the Spring of 2015. Click on the photo below to view slideshow. 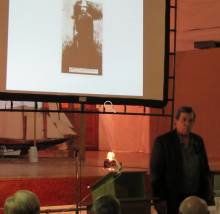