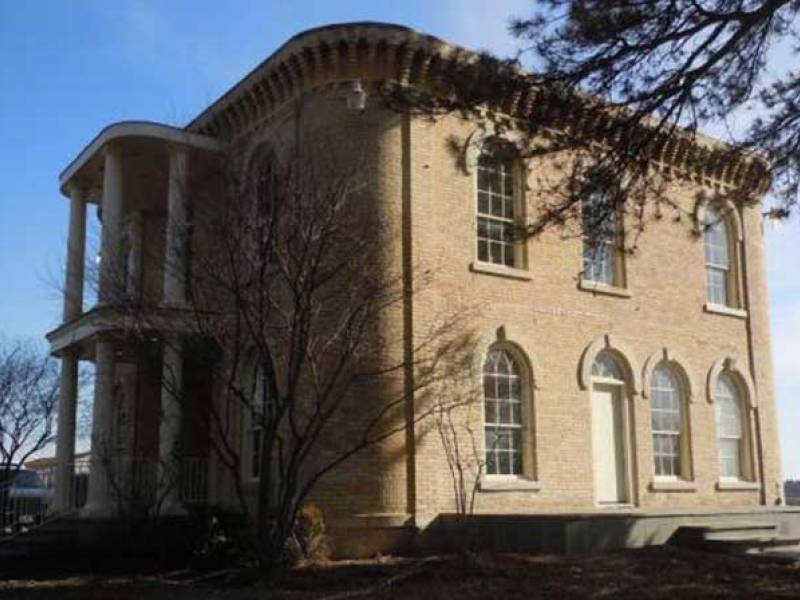 ABOVE “I look at it as historical preservation for another structure in McHenry County,” Stickney House Foundation President Nicole Horn said. “You look at the number of farms now, and it’s sad to see that part of history disappear. We’re not just about saving the house, we’re about saving the farm and the estate.”

To those who have dedicated countless hours working to restore the corner-free Stickney House in Bull Valley, it can seem as though they are going around in circles.

Yet they persist – not just for months or years, but for decades.

“It’s just an ongoing thing,” said Stickney House Foundation volunteer Virginia Peschke. “I think there is a genuine love of the building among people in the village … You earn $3,000 at a pop and you put in a couple windows, then you keep going. Everybody just has their interest in it and then I think [that interest] kind of replenishes itself.”

Newly elected foundation president Nicole Horn said she began working on the project 26 years ago – when the village received the Stickney House as part of a 700-acre annexation. But despite housing village offices and the police department, renovations to the 157-year-old structure come from private donations and not taxpayers.

“Sometimes we do not get any funding and we have to take it in stride,” said Horn, who runs the architectural firm NH Regal Designs in Algonquin. “And sometimes we have to do maintenance when things fall apart and break. Unfortunately, that falls on our shoulders, too.”

Many of the repairs completed early on revolved around shoring things up – from pouring new foundation walls to repairing a leaky roof to tuckpointing to upgrading interior plumbing and electrical services. A ramp to ensure access for the disabled was added to the east side, in as unobtrusive a spot as possible. And the basement’s dirt floor has been replaced with a modern cement floor suitable for archive storage.

“The Stickney House has been under a slow restoration for 20 years, and the majority of what has been done up to this point has been stuff not easily seen by the public,” Bull Valley trustee Peter Helms said. “We want to get done with the outside restoration, the pretty part that people can see.”

More visible repairs include replacing all 15 windows with similar or original materials. Passersby also see the stone walks and the solid walnut door cut on a radius so that it conforms to the building’s unique architectural style. In 2002, some 2,700 vintage bricks were used to make repairs.

A period-specific landscaping plan is among the “smart restoration” items on the foundation’s list, Horn said.

“We really stay on track and research the people that we’ve hired over the years,” she said. “We get expert advice on how to handle restoration and in writing, so that every one of the foundation members know what we’re doing going forward.”

George Stickney, a New York native and the first white settler in Nunda Township, was the first township supervisor, a road commissioner and the Holcombville School director for 16 years. He married the daughter of another prominent pioneer, Sylvia (spelled Silvea in old records) Beckley, in 1839. The Stickneys received title to the property in 1840 and construction to replace their original log cabin began in 1849.

The 10-room house, located at 1904 Cherry Valley Road, was completed in 1856. Its signature rounded corners mirror Sylvia’s interest in spiritualism. Perhaps the loss of seven of 10 children fueled her interest in communicating with the dead.
The Stickney House and 2 acres were deeded to the village in 1986 and was placed on the National Register of Historic Places in 1987. The Stickney House Foundation was established in 1991.

The next bellwether objective is to restore the second-floor ballroom.
“The idea is to make the building one day be a museum or at least a community center for Bull Valley,” Horn said. “Whatever it winds up to be, it is a unique structure. Whenever I’m there, there is someone who is walking in who wants to take a photograph and know more about it.”
Helms said at least a quarter million dollars have been spent so far on the Stickney House – much of it just to keep the house in one piece. Horn estimated another $200,000 is needed to renovate the second floor, which had been cut up into apartments. New electrical service, heating and cooling ducts, insulation and plastering is required … not to mention a top-notch fire-suppression system.

“Everybody assumes we get state funding, but it’s all private donations,” Horn said. “It doesn’t matter if you donate $5 or $5,000. Every bit is worth it.”

After demolition and removal of modern additions to the second floor take place and the original ballroom is restored, the foundation hopes to turn the 30-by-30-foot building into a museum and fix up the 3,000-square-foot barn along Cherry Valley Road.

“The goal is to restore the beautiful Victorian Italianate home and grounds to their original condition and use the home as a community center for area groups and a learning experience for school children,” Bull Valley records clerk Michelle Stankus said.

“At the very beginning we had beetle infestations and animals. People were squatting in there during the 1970s,” Horn said. “But over the last five years we’ve made really outstanding progress that has made it a viable, tolerable office building, and it looks like a house again. … I think I can see in the next decade we could be wrapping up a lot of our goals.”