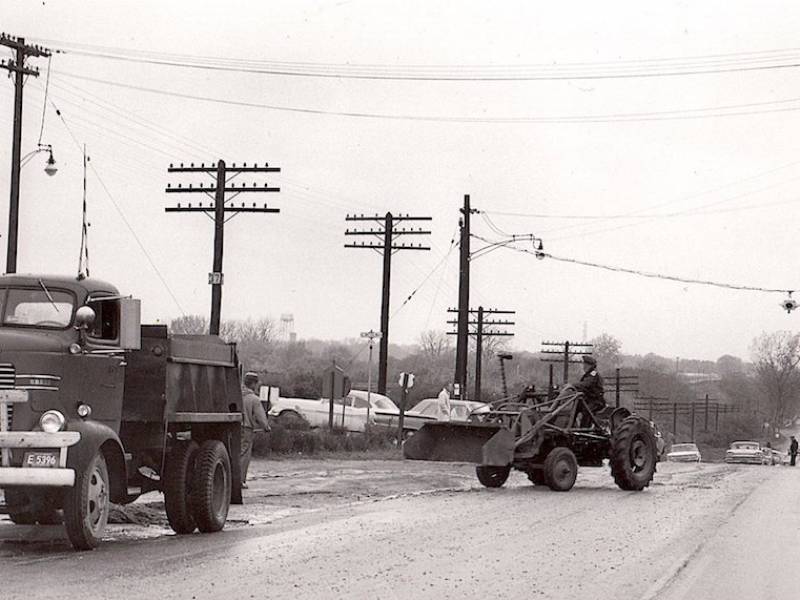 There was a time when people took their lives into their own hands simply crossing the street.

Big towns, small towns; it didn’t matter. People were routinely killed by railroad and trolly cars, carriages and wagons, and flying debris from unsecured loads and improperly maintained vehicles. And a culprit behind many of these crashes was speed.

Speed limits were not imposed until around the turn of the century, and even then, it was – quite literally – a hit-and-miss proposition. A 1911 ordinance in McHenry made a point of making it unlawful to “propel, drive or operate … any motor vehicle, motor bicycle or any other similar vehicle … at a speed greater than is reasonable and proper, having regard to the traffic and use of said street or streets, or so as to endanger the life or limb or injure the property of any person.”

Take this case from May 6, 1939, edition of the Woodstock Journal:

“Traveling 70 or more miles an hour down the highway, and without brakes, and trying to pass another car in a group of three moving in the same direction, under such conditions cost two lives … and resulted in the serious injury of another.”

Despite having fewer cars on the road, nearly 160 more people died on Illinois roads last year than in 2019. According to the Illinois Department of Transportation, about 1,166 people died in motor vehicle crashes in Illinois in 2020 – a nearly 16% increase compared to 2019. Officials theorize that roads, vacated because of COVID-related closure and stay-at-home orders, gave the remaining drivers a lead foot. And it’s not just happening here.

Even though Americans logged about 15% fewer miles from January through September 2020, the National Highway Traffic Safety Administration reported 28,190 people died during the first nine months of last year – jump of more than 1,200 compared to the same period in 2019.

In a 2018 report, the World Health Organization noted that the U.S.’s traffic fatality rate of 12.4 deaths per 100,000 was about 50 percent higher than similar nations in Western Europe, plus Canada, Australia and Japan.
About 1.35 million people die each year around the globe as a result of road traffic crashes, and more than half are pedestrians, cyclists and motorcyclists. The WHO reported that for each percentage jump in speed, the risk of a fatal crash increases by 4 percent. Road traffic injuries are now the leading cause of death for those ages 5 to 29.

Last February, delegates from 140 countries pledged to cut the number of road traffic deaths and injuries in half by 2030. That is becoming an increasingly tall order.

As if there wasn’t enough to worry about this winter, now there’s the weather.

The average temperature, through mid-February (13.3 degrees), was the coldest on record in the Chicago area – rivaling the record-setting cold streaks of 1875 and 2015 (14.6 degrees). The normal average is 27.7 degrees.

The National Weather Service reported that the current stretch with at least 10 inches of snow on the ground already put last month among the top 10 Februarys of all time. Still, it could be worse. We could be living in Texas.

Among President Biden’s first acts was rejoining the 2015 Paris Agreement – the world’s largest effort to confront climate change. Its goal is to limit global warming to well below 2 degrees Celsius (35.6 F), preferably to 1.5 degrees, above pre-industrial levels by the end of this century. On current plans the world is expected to breach the 1.5 Celcius ceiling within 12 years or less and to hit 3 degrees Celcius of warming by the end of the century.

Toward that end, Massachusetts, Connecticut, Rhode Island and the District of Columbia launched the Transportation & Climate Initiative Program in December. Eight others – Delaware, Maryland, New Jersey, New York, North Carolina, Pennsylvania, Vermont and Virginia shared a statement of support. However, generally speaking, the cap-and-trade program designed to curb greenhouse gas emissions, has sputtered out of the gate.

Slated to begin in 2023, it requires wholesale suppliers of transportation fuel to a state to buy allowances – either directly or on a secondary market – for every ton of carbon dioxide produced upon burning the fuel they sell. The states then invest the proceeds into more environmentally friendly transportation alternatives. The three participating states and Washington, D.C. committed to investing no less than 35% of the proceeds – an estimated $100 million so far – in underserved, over-polluted communities. In a joint statement, the jurisdictions pledged to cut greenhouse gases from motor vehicles an estimated 26 percent by 2032.

Illinois is among 25 states in the U.S. Climate Alliance, begun in 2017. Its goals include implementing policies that “advance the goals of the Paris Agreement to reduce greenhouse gas emissions by at least 26–28 percent below 2005 levels by 2025.” According to the U.S. Energy Information Administration, Illinois generated most of its electricity in 2019 from nuclear energy. Last year a Texas company, Vistra Energy, announced the closure of four of its eight coal-fired power plants. The 11 plants in Illinois that still use coal mostly are located downstate – with the exception of the Waukegan Electric Generating Station and Will County Generating Station in Romeoville.

Published March 2, 2021, in the Northwest Herald