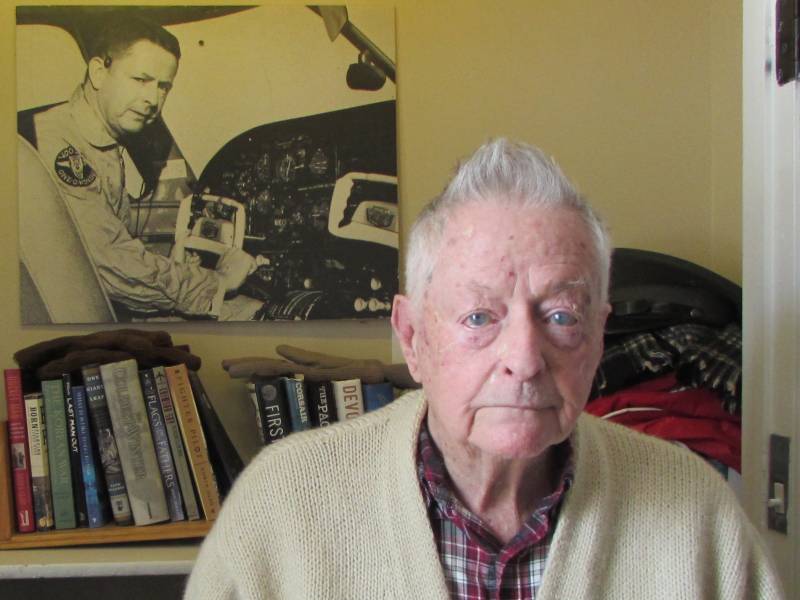 Austin James “Jim” Bailey admitted he always was interested in flying. As a teenager, he wrangled a job sweeping floors around the Boston airport, just so he could be close to airplanes and the pilots who flew them.

“In the 1930s, there was always something going on, and I got to meet some very interesting people,” Bailey said.

The list of celebrities passing through included Charles Lindbergh and Eddie Rickenbacker.

“I didn’t really know that I was going to become a pilot,” said Bailey, 96, of Crystal Lake. “It just kind of evolved.”

Bailey will be among five veterans honored Nov. 7 at the McHenry County Historical Society and Museum’s annual quilt program and raffle drawing.

This year’s headliner is Janette Dwyer. Dwyer – an avid quilter, collector and former quilt shop owner – will present “Bargain Quilts and the Quilt Buy of the Century.” Before the program – which will feature 30 quilts, including two “Century of Progress” quilts from the 1933 Chicago World’s Fair – the Gazebo Valor Quilters will give a presentation at 1:30 p.m.

The group of about 40 women from the northwest suburbs was established in 2011. Since then, the local quilters have presented more than 1,800 quilts to deserving veterans. This year’s class includes:

• Dennis Turskey, who served in the Army from 1963 to 1965. The Cary resident trained as petroleum lab specialist and also saw combat in Vietnam.

• Richard B. Hiller, a Korean War veteran from Johnsburg, served from 1953 to 1957. He is a former first lieutenant in the Air Force.

• Rich Solarz of Crystal Lake is the Marengo police chief. He served
18 months in the Marines’ 2nd Battalion – first with the infantry in Korea, Japan, Europe and Africa, and later as an embassy guard in Paris and Dakar, Senegal.

• His older brother, John Solarz, 59, formerly of Lake Zurich, served from 1978 to 1984 in the Navy. Four of those years were served on the guided missile destroyer USS Dewey. He parlayed his training in advanced electronics into a 33-year career at Northrop Grumman in Rolling Meadows.

From 1943 to 1946, Bailey served as a pilot with Marine Fighter Squadron 314 in the South Pacific. Among his awards was the Distinguished Flying Cross. After the war, Bailey completed his studies and earned a bachelor’s degree in engineering. He became a member of the Reserve Marine Fighter Squadron at the Naval Air Station in Squantum, Massachusetts.

From 1950 to 1952, Bailey served with Marine Fighter Squadron 235 during the Korean War. He was shot down in 1951 a few miles south of Pyongyang, North Korea, and successfully ditched in the Yellow Sea, where he was rescued by the Air Force sea rescue team. Once again, he earned a Distinguished Flying Cross, a Purple Heart and numerous unit citations before his release from active duty as a major in August 1952.

“I didn’t have any fear,” Bailey said. “I just had an intense interest.”

Bailey credited his studying of the Corsair’s manual for enabling him to open the canopy and inflate his life raft after his unexpected water landing.

Bailey began work as an engineering test pilot for Honeywell – Minneapolis in August 1952. While there, he had a hand in testing systems affecting everything from advanced flight control to auto approach and carrier landing, and from altitude to fire control. He later became a project staff engineer for Swedish programs and flew the Swedish Air Force’s SAAB J-37 Viggen STOL fighter. He and his family of five moved to Sweden in 1967 not knowing a soul, and they lived there three years. Bailey found the people there kind, humble and thirsty for knowledge.

“It’s easy to judge people from afar because you don’t really know them,” Bailey said. “It’s kind of a shame when you end up fighting people that you otherwise might be good friends with. It’s a crazy, mixed-up world.”

For information about the Gazebo Valor Quilts, contact Cathy Smetters at cbsmetters@ameritech.net. Information about the Nov. 7 quilt program and drawing for the hand-sewn World War I tribute quilt, “Forever Poppies,” is available at wwww.gothistory.org.

In partnership with the Pritzker Military Museum & Library, the Society of The Honor Guard, Tomb of the Unknown Soldier society, the American Legion and the Veterans of Foreign Wars, the World War I Centennial Commission has launched a “Bells of Peace” initiative marking the 100th anniversary of the original Armistice Day.

The day was created a century ago to commemorate the armistice that was signed in the Forest of Compiègne, France, marking the official end of World War I. The order to cease all firing took effect at 11 a.m., “the 11th hour of the 11th day of the 11th month.”

A national tolling of bells in remembrance of those who served and sacrificed is scheduled for 11 a.m. Nov. 11. Participants are urged to toll their bells 21 times, with a five-second interval between tolls. The 21 tolls of the bell symbolize the nation’s highest honor. For information, visit www.ww1cc.org/bells.

Bells will be tolled in communities across the nation in places of worship, schools, town halls, public carillons and cemeteries to honor American men and women who served during the “war to end all wars.” More than
9 million combatants and 7 million civilians died as a result of the war.

The U.S. officially entered the war April 6, 1917. About 4.7 million Americans stepped forward to serve in uniform during the war; 2 million of them were deployed overseas to fight, and 116,516 of them never made it home.