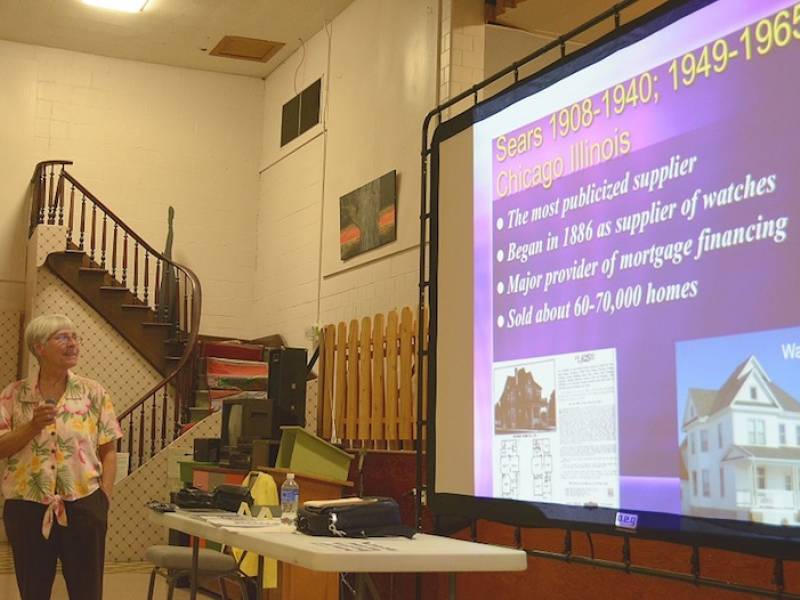 Sears Modern Homes by architectural historian Rebecca Hunter of Elgin. General merchandise mail order catalogs were established in the 1880s, offering a wide variety of goods to the rural market. House plan books appeared at about the same time. In 1906 a combination of these two marketing techniques first came on the scene: mail-order houses. Sears Roebuck is the best known of all the companies that sold mail order homes, although Aladdin Company was the first in the business. Attendees will learn the history of mail order homes and view images of homes from the eight major producers of these homes. More than 400 models of these kit homes were sold by retailer Sears Roebuck and Co. between 1908 and 1940 and up to 70,000 were built in 43 states – including many in McHenry County.

LOCATING AND IDENTIFYING MAIL ORDER HOUSE PART NUMBERS
The framing boards of a precut kit house were numbered in order to facilitate construction. After the house is built, it is usually possible to see some of these numbers. Presence of part numbers constitutes proof that the house is in fact a mail order kit.  The style and location of the numbering may be a good indicator of which company built the house. The numbers are not visible on every board, so it may take a few minutes and a good flashlight to find one. Look on floor joists in the basement, attic rafters, basement stair risers and treads, wall studs - any visible framing board which has not been painted. Even in a kit, numbers will not be found on boards that were not precut: e.g. flooring, trim boards, doors and windows.
1. SEARS part numbers are stamped in dark ink. They are about one inch high, and from 1915 to about 1930 usually are a capital letter followed by one or more numerals, (e.g. A159, L23, C2).  The numbers are usually near the end of a board, on the wider surface (for example, on the 4" side of a 2X4).  Later they may be stamped in red ink or may be 2 numbers separated by a hyphen or slash (e.g. 13 - 9). Sears homes before 1915 were not precut kits, and so were not numbered. Model number or order number may be handwritten in grease pencil.
2. GORDON-VAN TINE/WARDS numbers are handwritten in grease pencil, usually in the middle of a board. They most often consist of numerals, hyphenated in groups, e.g. 17-21-19, or 3-5 digit numerals. Part names are stamped in ink, capital letters about 1" high (e.g. "ceiling joist" "top rail"). Model or order numbers may be handwritten 4-5 digit numbers. Delivery address may be stamped or stenciled in ink.
3. ALADDIN, LEWIS and STERLING Company: early numbers are handwritten in grease pencil, usually in the middle of a board and consist of numerals, usually hyphenated in groups of 2 or 3. Some of the numbers are fractions, e.g. 42-18-11 3/4. Later (after about 1928) numbers may be stamped in ink, 2 numbers separate by a hyphen, e.g.12-1. Part names may be stamped in ink.
4. HARRIS Brothers numbers are stenciled in ink, usually in the middle of a board, and may be numerals alone, or numerals and letters (e.g. 76, HR 50, RI 32). Model number and/or order number may be handwritten in grease pencil. Part names may be stamped in ink.
5. PACIFIC HOMES parts are marked in grease pencil with 4-5 digit numbers, and the names of the parts. 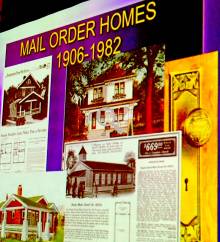