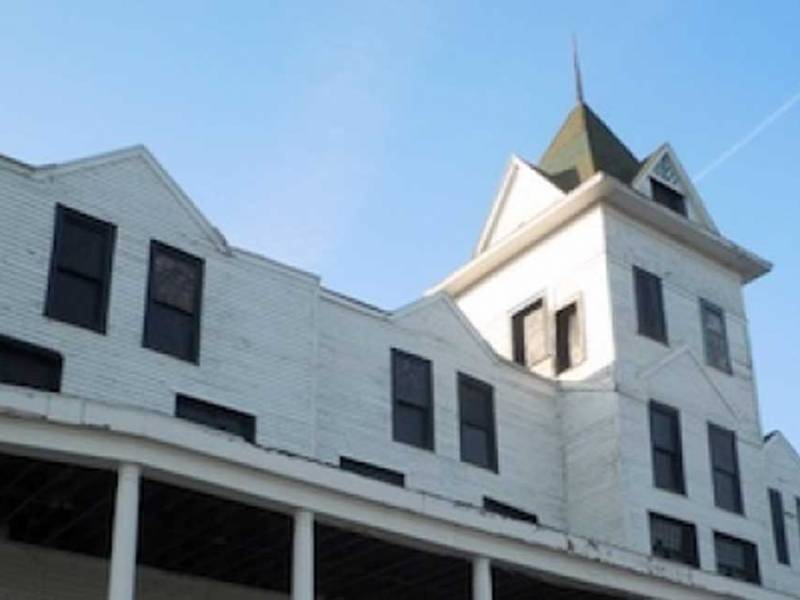 Shuttered since May after being condemned by the village, the Landmark Mineola Hotel in Fox Lake is teetering on the cusp of oblivion.

The owner of this century-old hotel and the village president say they are committed to saving what is considered to be the largest wooden structure in Illinois – 250 feet long and four stories high on the side facing Fox Lake.

“We’ll work with anybody who thinks they can restore that building,” Fox Lake Village President Ed Bender said. “Personally, I view it as an icon.”

Building owner Peter Jakstas Sr. also reiterated his resolve to save the “Grand Lady of the Lakes.”

“I grew up here. It’s tearing me apart,” Jakstas said of the controversy that threatens Fox Lake’s signature building, which was added to the National Register of Historic Places in 1979. “It has to be saved. It’s the jewel of the chain.”

The Mineola was built in 1884 as a summer retreat and clubhouse by five wealthy businessmen and members of the Chicago Board of Trade. By 1901, it had been sold to Edson C. Howard, who remodeled it into a public hotel featuring 100 rooms, 79 of them for sleeping. According to the 1920 edition of the Hotel Red Book and Directory, Howard’s Mineola Hotel charged $4 to $5.50 a night.

The Mineola boasted hot and cold running water on the first two floors, two bowling alleys and a veranda designed by Alphonse Howe & Charles Caskey, the architects of the famed Grand Hotel on Michigan’s Mackinac Island. Interior trim is made of yellow pine and mahogany.

Jakstas said a domed-ceiling ballroom, added later, collapsed in the 1980s and was disassembled to even off the building.

“It was huge, and it stood out from any of the other resorts,” Jakstas said.

Just two other old hotels remain in Fox Lake – the Roxana Bed and Breakfast Hotel, formerly the M. Krasny Hotel built in 1893, and the Randolph Hotel, now a restaurant/bar called Blueberry Hill. But during its heyday, Lake County cultivated many hotels and a Wild West-type atmosphere. During Prohibition, the lakes region became a notorious hangout for Chicago mobsters, including Al Capone.

Diana Dretske, a Lake County historian and collections coordinator for the Lake County Discovery Museum, said a 1910 Chicago Tribune article concluded Fox Lake’s drinking and gambling establishments outstripped the levee districts of Chicago. In the late 1930s, Lake County’s board of supervisors appointed a special prosecutor to deal with the illegal gambling problem.

“Probably the most vicious resort is the Mineola Hotel,” the article added.

Jakstas’ father, a beer truck driver and the second of four generations of Peters in the family, bought the Mineola in 1943 for $36,000.

“When my father bought it, there had been 15 owners of the Mineola in the last 13 years,” Jakstas said.

In fact, the reputation of the hotel had deteriorated to the point that his dad had to pay beer vendors up front – before they brought the product inside.

But the building that survived rough clientele, several lightning strikes and a fire ignited by a guest on the third floor of the hotel in 1953 could not survive changes in societal mores.

“In 1951, Gov. [Adlai] Stevenson got rid of gambling and prostitution. That is when everything died out here [in Fox Lake],” Jakstas said.

After a raid, the slot machines were out of the Mineola by 1952, and the hotel’s last overnight guest left in 1963. Financial pressures prompted the sale of much of the hotel’s original furniture in 1969, and an attempted eBay auction with a minimum asking price of $2 million failed to attract a buyer. The bar and a 180-seat banquet hall kept some money coming in, but now even that is gone.

“I’ve got a white elephant,” Jakstas said. “Why is the village doing this? I don’t understand. This would be an attraction.”

‘It needs a little work’

The Mineola, situated on about 10 acres at 91 Cora Ave. (named for one of Howard’s daughters), has been in the Jakstas family for 69 years and was run as a family business for decades before that. But a lawsuit filed Feb. 2 against Jakstas and Mineola Hotel & Restaurant Inc. has perhaps inalterably changed its course.

In April, Village Building Commissioner Frank Urbina feared the building was in “imminent danger of collapse.” On April 13, two days after he and the village building inspector were denied access to the upper floors, Urbina condemned the Mineola.

“It is my judgment that because the structure has become dangerous, unsafe, unsanitary and unfit for human occupancy and unreasonable to repair, the structure should be demolished,” Urbina wrote in a letter to Jakstas. “However, if it is possible for the structure to be made safe by repairs, the repairs may be done at the owner’s option.”

Fortunately, the building did not collapse. In fact, an inspection from the ground showed no obvious bends in the walls or sags in the roof. Jakstas is in the process of replacing sub-standard replacement columns that now are helping hold up the porch roof. But fortunately, the Mineola uses continuous wooden studs that stretch from the foundation to the attic, creating an exoskeleton of sorts that supports the upper floors and roof. Rather than a foundation, internal 12-by-12-inch columns rest on huge boulders located in a crawl space beneath the structure.

“It needs a little work, but structurally it’s not going anywhere,” Jakstas said. “At the present time, I’m making the building as safe as I possibly can so it does not collapse. I have been in the marine business for 60 years this spring, restoring boats and replacing rotted decks. This is a little different, but the basics are still there.”

Jakstas insisted the pictures village officials took of horse-hair plaster falling off the ceiling pre-dated a new roof he had done around 1980. The damage, he said, mostly is cosmetic.

Keeping the place has been an all-hands-on-deck endeavor. But it was a challenge the entire family embraced. Jakstas estimated he already has invested more than $300,000 on new wiring and flooring in the banquet hall. Electric service also was upgraded in the kitchen amid thousands of dollars in repairs.

“Last year, I spent more than $7,500 and over 500 man-hours trying to correct what the village said were violations,” Jakstas said. He said spending an estimated $210,000 to tear the place down after all of this effort made no sense.

Bender said the village had no specific vision for the lakefront property, which spans 17.5 acres including the Jakstas-owned Mineola Marine next door. His preference is to save this piece of its past, rather than plow it under. But that, he said, hinges on cooperation from Jakstas.

“I travel quite a bit out of Illinois, and people ask me about it all the time,” Bender said. “Would I like to see it restored? Yes. But we’ve received no indication from the Jakstas family that they are entertaining that. None. … If he came in with an engineer and they came up with a plan to restore that building, we’ll listen. The ball is in his court. It’s on private property and there is nothing we can do to push it at this point, but we’ll be happy to work with him.”

Toward that end, Kathryn Thoman, an architecture historian and owner of the Milburn-based salvage company Character Builders, stopped by the Mineola while visiting Fox Lake and was smitten.

“I expected bats in my face or an angry raccoon, but it was in better shape than I expected,” Thoman said. “I want to get the bar running and the banquet hall running, and turn the rest of it into a bed and breakfast.”

She met with Jakstas and shared her vision for the building. She hopes to restore it piece by piece, working as intermediary with the village on behalf of building owners. Those interested in helping with the preservation effort can visit www.savethemineola.org or call her at 847-750-6463.

“I heard and read about it, and it bothered me. It was eating me up, the thought that this building may never be opened again,” she said. “I want to lease it from him for 12 months while I fundraise. After that, I’ll determine if I’m in a position to buy the building. …

“We are not going to become a Comfort Inn. Frankly, that is not my ambition,” Thoman said. “The Mineola belongs to everybody. No matter what, you are only really a caretaker of sorts.”

• Kurt Begalka is the administrator of the McHenry County Historical Society.