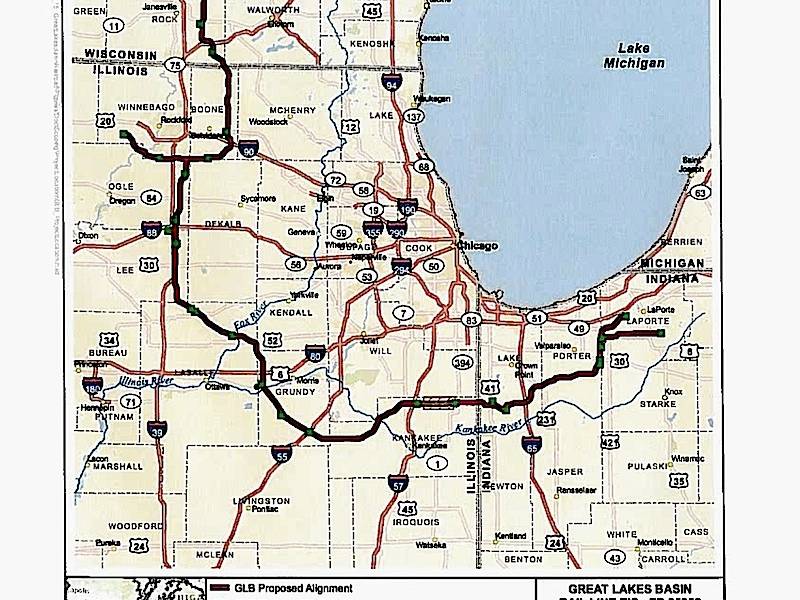 Railroads are responsible for developing much of this country, and McHenry County is no different.

The lines – such as the Galena & Chicago Union and the Chicago, St. Paul & Fond du Lac (which became the Chicago & North Western) – may be gone, but their legacy lives on. Where the railroads came through – Harvard, Woodstock, Huntley and Crystal Lake (via Nunda) – became boom towns. The losers in this high-stakes battle – such as Lawrence, Chemung, Franklinville and Hartland – have been relegated to crossroads, footnotes in history.

Perhaps that is why I am so intrigued by something we all would have thought unfathomable a few short years ago: a new railroad line. Great Lakes Basin Transportation Inc. is proposing to build and a 278-mile rail line from La Porte, Indiana, through Illinois to Milton, Wisconsin. Although it would not go through McHenry County, its impact certainly would be felt here, slipping past our western border near Garden Prairie and Capron.

The proposed bypass would service carloads not requiring transport to the Chicago terminal area for sorting or delivery. Instead, Great Lakes would construct a terminal for its proposed rail operations near Manteno to provide switching, servicing, and car and locomotive repair to its railroad customers. Great Lakes anticipates rail traffic times through the Chicago area, which can take up to 30 hours now to complete, would be reduced to fewer hours – depending on factors such as interchange point and speed restrictions.

“It would have some of the same benefits to the railroad as a turnpike on an interstate system has to trucking,” Boone County Chairman Bob Walberg said.

The $8 billion, 281-mile loop would be among the nation’s largest railroad projects in the past century, said Craig Pfannkuche, archivist for the Chicago & North Western Railroad Historical Society. The only things remotely similar were the long coal lines built in Wyoming, he said.

The idea is to bypass the bottleneck that is Chicago, by avoiding conflicts between passenger trains and freight that can tie up crossings for motorists in places such as Barrington and Mundelein, delay shipments where freight and passenger trains share track, and reduce speeds as trains feel their way through the worst of the congestion.

With about 500 freight trains operating in the area on an average weekday, it really is tough getting around, and there are concerns it will get worse. The Canadian National bought the Elgin, Joliet and Eastern Railway line in 2009, allowing it to reroute trains outside and around downtown Chicago. Nevertheless, North Dakota Gov. Jack Dalrymple noted in a 2014 hearing before the federal regulators that the Canadian Pacific reported 7,535 open requests in North Dakota averaging about 13 weeks.

“The North Dakota-owned State Mill and Elevator has reported that it has been forced to shut down its flour mill production 25 times this year due to delays in rail shipments,” Dalrymple testified.

Pfannkuche noted that other rail belts, established in the past around Chicago, have been swallowed up. The obvious solution is to move farther west.

“A substantial fraction of that traffic – estimated at 15 to 25 percent – does not originate or terminate in Chicago,” Great Lakes Transportation noted in its accompanying documentation to the Surface Transportation Board. “Today, that traffic has to fight its way through a crowded terminal area that also hosts about 700 Metra and Amtrak passenger trains every weekday. To make matters more difficult, Chicago’s physical plant, although well-maintained, has not changed significantly in over a century.”

The Chicago Metropolitan Agency for Planning concluded in a report last fall that:

The proposed route would bypass Chicago by linking Milwaukee and Brodhead, Wisconsin, to a new line through Boone County – with a western spur at the Chicago Rockford International Airport – then south to Lee County and east to Indiana before ending north in Michigan City, Indiana. Great Lakes Chief Executive Officer Frank Patton hopes to start the project in 2019. But when one considers all of the studies, rights-of-way battles, which include using eminent domain, and public consternation over the plan, it is likely to take much longer.

The proposal, after all, includes a 200-foot-wide right-of-way, flyovers at crossings of other railroads, crossing of the Illinois, Kankakee, Fox and Rock rivers, and grade-separated crossings of interstate highways and many roads. Much of the proposed route would consist of double track and modern signaling that would allow for up to 110 trains a day on the southern and western legs.

Walberg confessed he is “very conflicted” about the plan and how the autonomous federal Surface Transportation Board eventually might rule. While he appreciates the potential economic benefit to manufacturers and the local economy from such a project including what the company contends will be 500 to 600 permanent new jobs – he also understands why many farmers are up in arms.

“It would go right through my farm, a Centennial Farm built in 1908,” Walberg said. “I own 700 acres near where Kishwaukee Valley Road turns into Woodstock Road. It would cut that sucker in half.”

Walberg said one compromise would be to shelve the 55-mile eastern leg around Belvidere into the Wisconsin and instead build a 6-mile link to the existing rail line on the west side of Belvidere. Walberg said that would shave $1 billion off the price tag and still provide the access to the Rockford airport.

“That proposal would be welcomed by Rock County (Wis.) and Boone County, and still service Winnebago and Ogle counties, and the large rail yards in Rochelle.”