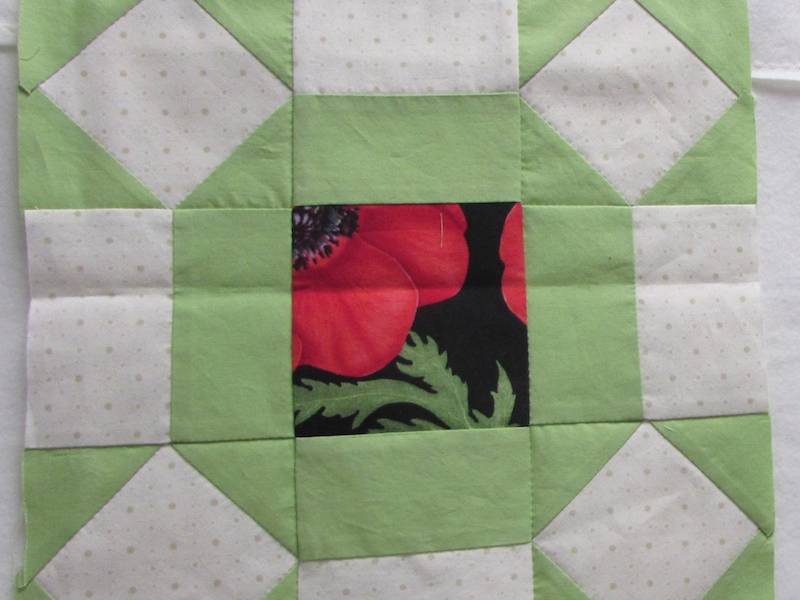 About 30 quilters from across the county arrived at the McHenry County Historical Society Museum Feb. 18 for Cutting Day – the day in which volunteers receive a packet of fabric and instructions on how sew a block for the newest Heritage Quilters Raffle Quilt. you need to sew blocks for the 2018 raffle quilt, "Forever Poppies." It features a World War I theme. The day's moderator, veteran quilter Arlen Bird, noted the "rolling stone" pattern originated in 1780's New England. It features a nine-patch with cream, several greens, and a showy black and red poppy fabric at the center.

The block has been around for many years – published in the Chicago Tribune Nancy Cabot column.  In March 1933 the paper stated that the rolling stone pattern originated in New England around 1780.  And Barbara Brackman states in her book that the block dates back to the Ladies Art Company catalog in print in 1895, and noted it was probably much older.  There are many variations of this block – with diamonds on the side pieces, more triangles in the center, added squares in the corners, one having as many as 65 pieces per block.  Our block, looking much more simple, has 29 pieces

As for the poppy story – it has long been a symbol of sleep, peace, or even death. Surprisingly, it is mentioned as a threat in the "Wizard of Oz." While beautiful, the field of poppies made Dorothy sleepy, and the scent would eventually cause her death. Fortunately, her companions found a way to carry her to safety and the fresh air revived her. Other sources note the bright scarlet color promises resurrection.

Some varieties of poppies are considered a common weed in Europe. Some varieties have ‘escaped’ the gardens and grow wild along highways across the United States.

The connection with World War I poem, "In Flanders Fields," by Canadian surgeon and soldier, John McCrae:

In 1915, inspired by the poem, an American professor at the University of Georgia, Moina Michael, replied with her own poem called ‘We Too Shall Keep the Fairth.” She then conceived of an idea to wear red poppies on our Memorial Day in May in honor of those who died serving the nation during war. She was the first to wear one, and sold poppies to her friends and co-workers with the money going to benefit servicemen in need.

Later a Madam Guerin from France was visiting the United States and learned of this new custom started by Michael. When she returned to France she made artificial red poppies to raise money for war orphaned children and widowed women. This tradition spread to other countries. In 1921, the Franco-American Children’s League sold poppies nationally to benefit war orphans of France and Belgium. The League disbanded a year later and Madam Guerin approached the VFW for help

.
Shortly before Memorial Day in 1922 the VFW became the first veterans’ organization to nationally sell poppies. Two years later their “Buddy” Poppy program was selling artificial poppies made by disabled veterans. In 1948 the US Post Office honored Ms. Michael for her role in founding the National Poppy movement by issuing a red 3 cent postage stamp with her likeness on it.