Home » Preserving the past can be a fleeting proposition 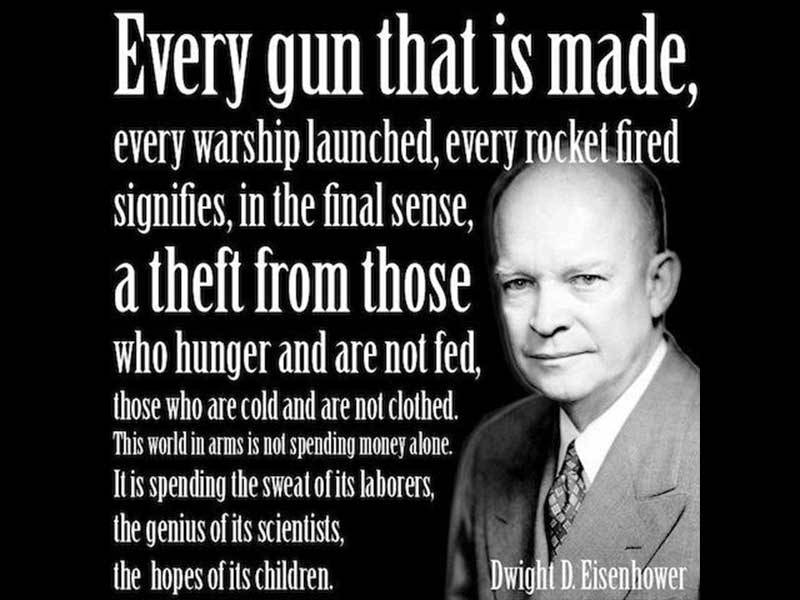 To those of you who have been quietly grousing about everything from the rising cost of health care to your rising property tax bill, it’s time to actually do something about it.

The opportunities for you to get involved are many, varied and, above all, immediate. The latest you’ve-got-to-be-kidding moment occurred Thursday, when the Trump administration proposed eliminating the Institute of Museum and Library Services, the National Endowment for the Humanities and the National Endowment for the Arts as part of its preliminary, fiscal 2018 budget. (Why are the arts always first on the chopping block?)

If approved, the $54 billion saved instead would be used for defense. Unfortunately, we’ve been through this culture vs. combat debate before. In his “Chance for Peace” speech on April 16, 1953, general turned President Dwight D. Eisenhower spoke to the long-standing debate about whether society is better served spending its finite resources on guns (military complex), butter (goods) or a combination of the two.

“Every gun that is made, every warship launched, every rocket fired signifies, in the final sense, a theft from those who hunger and are not fed, those who are cold and are not clothed,” Eisenhower told the American Society of Newspaper Editors. “This world in arms is not spending money alone. It is spending the sweat of its laborers, the genius of its scientists, the hopes of its children. This is not a way of life at all in any true sense. Under the clouds of war, it is humanity hanging on a cross of iron.”

“While these proposals from the Trump administration were rumored for some time, they are no less alarming and disturbing,” said American Alliance of Museums President and CEO Laura Lott in a written statement. “The Institute of Museum and Library Services, the National Endowment for the Humanities, the National Endowment for the Arts and other programs play an essential role in helping museums make the arts and the humanities accessible to all Americans.”

The president’s budget would eliminate $148 million for both the NEA and NEH – which now represent just .006 percent of the total federal budget. In addition, $230 million for the IMLS – which ultimately could affect local libraries and museums, as well as the Smithsonian and National Gallery of Art – is on the chopping block.

Funding also is being eliminated for the Corp. for Public Broadcasting, which received $445 million in fiscal 2017.

“There is no viable substitute for federal funding that ensures Americans have universal access to public media’s educational and informational programming and services,” wrote Patricia Harrison, president and CEO of the CPB.

She said eliminating federal funding – nearly all of which is used for programming and station support – would “initially devastate and ultimately destroy public media’s role in early childhood education, public safety, connecting citizens to our history and promoting civil discussions – for Americans in both rural and urban communities.”

During the next few weeks, members of Congress will begin to inform the House and Senate Appropriations Committees – which oversee this area of federal spending – which programs they believe should receive funding in fiscal 2018.

They are staffed by some of the most influential movers and shakers in Washington, including Sen. Dick Durbin of Illinois, Mitch McConnell, Lindsey Graham, Marco Rubio, Patrick Leahy and Tom Udall. As part of this process, U.S. Reps. Paul Tonko and Louise Slaughter, Democrats from New York, as well as New York Sen. Kirsten Gillibrand and Republicans Leonard Lance and David McKinley, are circulating letters of support for the IMLS Office of Museum Services.

In the meantime, visit www.congressweb.com/aam to make your voice heard … or suffer the consequences.

“… Now everybody takes seriously the destruction of heritage and culture as part of this extremist strategy,” said Irina Bokova, director-general of the United Nations Educational, Scientific and Cultural Organization after the destruction of World Heritage sites in the Middle East by Islamic State militants. “The protection of culture is a major peace and security issue, inseparable from the protection of human lives.”

And after you’ve spoken up on behalf of the humanities, consider chiming in on these two local planning efforts:

• The McHenry County Planning and Development Department is collaborating with Lake County and local agencies, governments and organizations to create a Fox River Corridor Plan designed to improve water quality, transportation access, recreation and open space, as well as river-related commerce. The plan focuses on an 11-mile stretch that extends from Burtons Bridge on the north to the eastern boundary of the Fox Bluff Conservation Area in the south.

Toward that end, there is a survey residents can take at www.cmap.illinois.gov/programs-and-resources/lta/fox-river-mchenry-lake. After I recently completed the survey, I was pleased to see people identified environmental quality as their top objective. Cooperation between various stakeholders along the river also was identified as a major concern, followed by walking and cycling opportunities. A draft plan is expected in August.

Not only did the Fox River serve as an important transportation route in the early days of the county – as well as a source of power and for ice – it remains a magnet for commerce, tourism and recreation. Many communities along the Fox River also rely on it as a source of fresh water. Needless to say, its future affects all of us.

• President Donald Trump’s draft budget proposal does not specifically target the National Park Service, but it does lop $4.7 billion and $1.5 billion, respectively, from the agriculture and interior departments.

Retired Augustana College geography professor Norm Moline is confident our national parks will survive the fiscal fracas. He will explain why we are so lucky to have them, during the McHenry County Historical Society’s next Sampler Series lecture at 7 p.m. Monday in the museum, 6422 Main St., Union. Doors open at 6:30 p.m. For details visit www.gothistory.org.