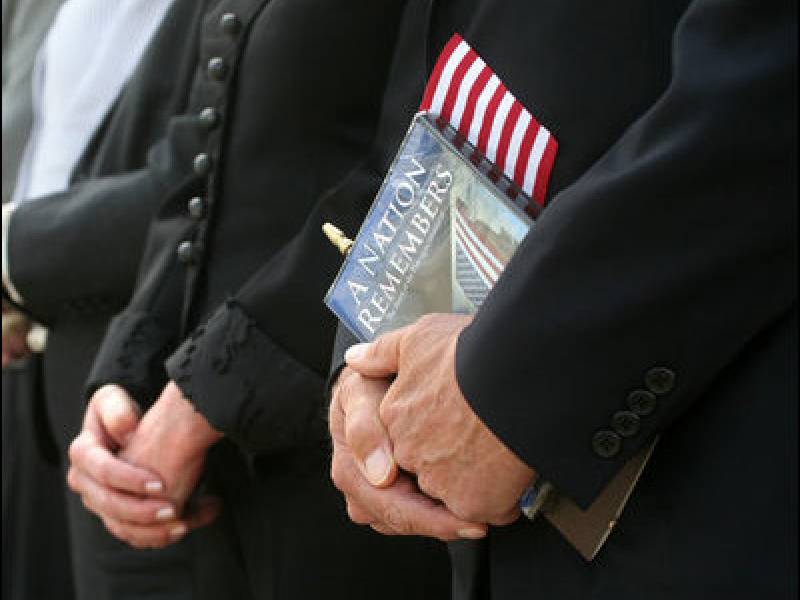 "I was listening to WFMT classical music when the broadcast was interrupted to announce a plane crash in New York. I felt it was bad, but [it was] not until I went to church for a staff meeting – and saw everyone watching TV and then saw the second c crash – did I realize how tragic it was. Our staff meeting never happened. We just stat staring and not believing what we were seeing on TV. We were stunned. ... I think we all realize that life is short and we must live now and cherish every day we have with family and friends."

Those of us who witnessed the scene play out live on television, will never forget that grainy image of a Boeing 767 slamming into the south tower of New York’s World Trade Center – minutes after an American Airlines jet struck the north tower.

Nineteen al Qaeda militants hijacked four airplanes for suicide attacks. A third plane hit the Pentagon and the fourth crashed in a field in Shanksville, Pennsylvania, after passengers and crew members attempted to wrest control. All 44 people on board United Airlines Flight 93, including the four hijackers, perished. Nearly 3,000 people died during the 9/11 terrorist attacks.

It launched America’s “war on terror,” which included a military presence in Afghanistan. It also forever changed how we look at the world. We’ve become less trusting, more guarded. We’ve witnessed “man’s inhumanity toward man” up close on a daily basis. But it has also strengthened our resolve in a way not even COVID could.

That is why it is important for us to pause and reflect. The National September 11 Memorial & Museum is observing six moments of silence on Sept. 11 to mark each horrific link in the chain of events. The first moment of silence happens at 8:46 a.m. Houses of worship across the nation are encouraged to ring their bells.

The National Archives and the National Archives Foundation also are marking the 20th anniversary of 9/11 with a series of free, online programs starting at 4 p.m. Sept. 8 with “How We Remember: Sept. 11 Memorials.” With all of the controversy surrounding memorials lately, listening to a number of memorial designers could prove educational. For information, visit https://www.archivesfoundation.org/remembering-911/.

It’s not every day that a new, vibrant historic preservation group is created. But that is what happened in Richmond.

The W.A. McConnell Foundation rose from the ashes of what was a failed attempt to keep Memorial Hall in public hands. And before the proverbial paint dried, a group of community preservationists had zeroed in the community’s oldest structure and galvanized the grassroots financial support to needed to buy what is referred to as “Olde No. 90” at 10328 N. Main St. The McHenry County Historical Society plaqued the house in 1984.

“We began talking about this several months ago,” foundation vice president Allison Kessel Clark said. “We have a lot of big dreams.”

Last month, the newly minted McConnell Foundation purchased the building and an adjacent rental property for $95,000. It received a third of the money in loans, but the rest came from donations. Now it requires money – or tradesmen – to fix the place up, especially the roof. Clark said the group is hoping to launch its first fundraiser during Fall Fest, Oct. 23-24.

“One floor will serve as our office and one floor will be used by displaced community groups that had been meeting at Memorial Hall,” she said. “A small museum is planned for the basement, but it needs a lot of work.”

One of Richmond’s founders, Charles G. Cotting and his wife, Sally, arrived in the area when it was little more than a handful of log cabins. Cotting built this circa 1844 house and storeroom across from the mill he owned along the Nippersink Creek. He later built a larger Italianate house nearby at 5512 Mill St. in 1865. He lived there until his death in 1883.

For information about the foundation, its plans and how you can help visitwww.wamcconnellfoundation.org.

“I think it solidifies who we are, that we’re real and we have a mission; and we’re able to fulfill that,” Clark said. “We were able to preserve something that easily could have been demolished and make that our home. I think this is absolutely the right move for us.”

No trace of the former Woodstock Hospital remains on South Street. A passerby might assume that nearly 4 acres was always a part of Woodstock High School. In fact, Northwestern Medicine donatedthe property to District 200 and the building was demolished in February.

The Woodstock Hospital, renamed Memorial Hospital of McHenry County following World War II, remained there until 1994 when a new, 108-bed hospital was built at 3701 Doty Road. Several ownership changes followed, during which time the building was used for behavioral services, rehabilitation and offices. As finances tightened medical/surgical operations ceased in 2017 at what is now Northwestern Medicine’s Woodstock Hospital on Doty Road.

Local historian and reenactor Ed O’Brien of Harvard presents “The American Civil War Soldier” at 2 p.m. Saturday, Sept. 18, at the McHenry County Historical Museum, 6422 Main St.. Learn what life was like for the average Civil War soldier – from training, to camp life, to the battlefield.

Although no battles were fought in Illinois, McHenry County more than 2,500 men into the Union ranks, most of them serving with 15th, 95th and 36th infantry regiments, as well as the 8th Illinois Cavalry Regiment.
Admission, which includes access to the museum, is $5 for Society members, $8 for nonmembers.