Polluting our planet with plastic simply not logical

Home » Polluting our planet with plastic simply not logical 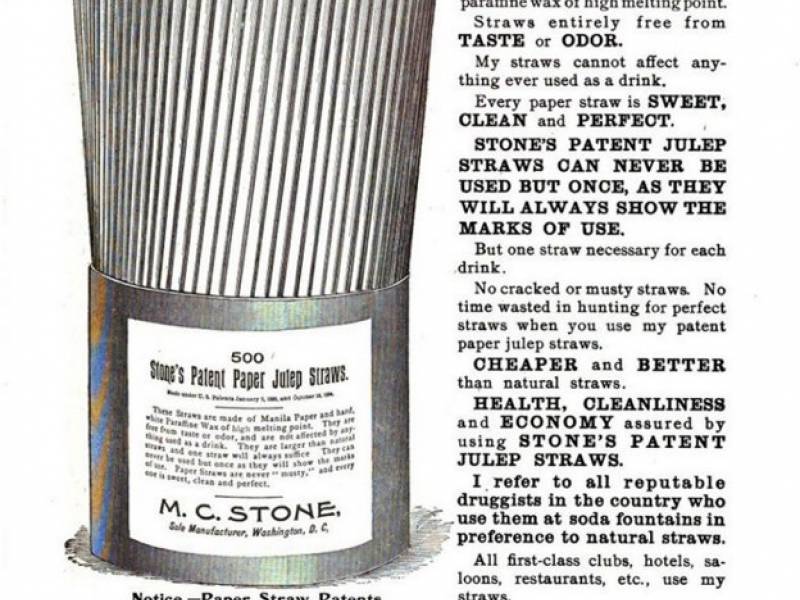 Polluting our planet with plastic simply not logical

To me, the hyped-up arrival of biodegradable drinking straws is a little bit like the return of “old” Coke. Was it ever really gone?

The first known straws were made by the Sumerians, most likely to avoid solids created when fermenting beer. American inventor Marvin C. Stone created the first “artificial straw” on Jan. 3, 1888. Before that, folks used rye grass to sip beverages. But – pardon the pun – they sucked. They imbued beverages with an undesirable grassy flavor. And, worse, Stone noted in an 1895 advertisement that the insides of many of these natural straws were filled with “dried mold or must.”

Stone made his first prototypes by spiraling a strip of paper around a pencil and gluing it at the ends. He next experimented with paraffin wax-coated manila paper, in an attempt to keep the straws from getting soggy. By 1890, his machines soon produced straws that retained their glue – even when exposed to stronger alcoholic beverages – and in quantities that surpassed Stone’s original product: cigarette holders.

Drinking straws grew increasingly popular, fueled by Ohio inventor Joseph Friedman’s bendable straw in 1937. Popular with children and hospital patients, it led him to form the Flexible Straw Corp. Paper straws were popular through the 1960s until cheaper plastic straws replaced them. Plastic straws now make up 99 percent of the global drinking straw market, with paper, glass and metal straws rounding out the total.

According to Recyclebank, Americans use 500 million straws a day. By 2050, there will be more plastic in the ocean than fish, according to a 2016 report from the World Economic Forum.

Because their size makes straws difficult to recycle, people are seeking more environmentally friendly alternatives. American Airlines is stocking its lounges with biodegradable, eco-friendly straws and wood stir sticks. Hyatt announced that plastic straws and drink picks would be available by request only after Labor Day. And Starbucks plans to eliminate plastic straws from its 28,000 stores worldwide by 2020. Its solution are fluted lids that some have likened to adult “Sippy” cups.

Aardvark, a division of Precision Products Group in Indianapolis, cannot make paper straws fast enough. Another popular U.S.-based paper straw supplier, Imperial Dade, saw demand for paper straws jump 100 percent in the past quarter. Now we have to worry about tariffs on wood pulp.
•••
Mention “puzzle” and many folks fear sweating over a 1,000-piece jigsaw of an Ansel Adams landscape or a devilishly difficult Salvador Dali image of melting clocks. But there are far different varieties to chose from – including various forms of mechanical, logic and cryptic puzzles, to name a few.

Judith Schulz, director and curator of the Logic Puzzle Museum in Burlington, Wisconsin, knows more about puzzles than most. She has an estimated 400 puzzles in her personal collection and about 60 brainteasers at the museum, located inside a historic downtown building at 533 Milwaukee Ave.

Americans embraced the puzzle craze in the early 1800s when interest in the Chinese tangram – a dissection puzzle consisting of seven flat shapes (tans) – swept through Europe and the U.S.. Gen. Ulysses S. Grant, like Napoleon before him, strategized with the aid of puzzles.

Schulz, a teacher for more than 40 years, began the museum in 1995 after some popular workshops with teacher and groups.

“It was so successful it just kind of started expanding from there,” she said. “People think: ‘Those four pieces are not going to outwit me.’ But it’s a challenge. It’s a quick challenge and it is hands-on.”

Admission is $10 a person for a 90-minute session. Reservations are required and may be made by calling 262-763-3946. The museum is suitable for ages 5 and older. For information, visit www.logicpuzzlemuseum.org.

Mystery Objects come to the museum Nov. 3 to 18. Handle close to 300 parts, tools, pieces, antiques and curiosities. Each day features an “object in a box” challenge. You also may want to check out the Spinning top & Yo-Yo Museum next door. Visit www.topmuseum.org for information.
•••
Illinois Humanities invites Illinois authors, artists, educators and cultural practitioners to apply to join the 2018-2020 edition of its Road Scholars Speakers Bureau by 5 p.m. Saturday.

Proposed presentations addressing any subject matter within the humanities will be considered. The humanities encompass such disciplines as literature, history, philosophy, folklore, religious studies, and the histories and theories of the arts. Additionally, Illinois Humanities hopes to include about eight to 10 presentations in its next roster that will address issues related to the criminal justice system and its effect on Illinoisans.

About 30 presentations will be chosen. The application form, which includes complete information about th www.ilhumanities.org/application-to-become-a-member-of-the-road-scholars....

For information, call 618- 468-5580.
•••
Cheer on the McHenry County “Independants” as the historical society’s “club nine” plays the Grayslake Athletics starting at 3 p.m. Aug. 25 at Central Park in Grayslake. This Civil War-era game is unlike what we are used to today. Players did not wear gloves, could not steal and there were no “balls” thrown by the hurler.

To get there, take Route 120 east to South Lake Avenue. Turn left and then take another left into Grayslake Central High School to park. Walk across the street into Central Park. Admission to the game and to balloon launch that follows is free. Bring chairs or a blanket to sit on.