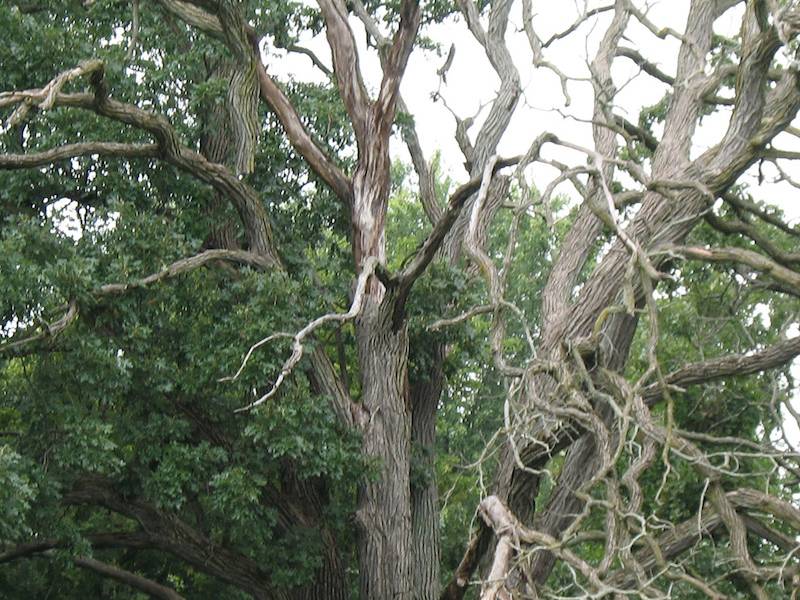 The report, like most reports of this ilk, has a long title – “Chicago Wilderness Region Urban Forest Vulnerability Assessment and Synthesis.”

This effort is not another admonishment of how we’re on the road to an even hotter Hades in our greenhouse gas-emitting Navigators. No, this collaboration of multiple agencies under the Urban Forestry Climate Response Framework umbrella, attempts to educate the public on how to best cope with increasingly difficult conditions.

The team, led by the U.S. Department of Agriculture’s Forest Service, evaluated 7 million acres covering parts of Illinois, Indiana, Michigan and Wisconsin. It found our forests face significant threats from invasive species, pests and disease, land-use changes, development and fragmentation – all made worse by climate change.

“Observed trends in climate over the historical record from 1901 through 2011 show a temperature increase of 1 degree F in the Chicago Wilderness region. Precipitation increased, as well, especially during the summer,” the report states. “Mean annual temperature is projected to increase by 2.3 to 8.2 degrees F by the end of the century, with temperature increases across all seasons.”

The USDA team and found that 15 percent of tree species in the region have moderately high or high vulnerability to climate change. Of those species least affected, 77 percent are invasive species. All this means that the heritage forests we’ve come to admire – as well as balsam fir, Douglas fir, white spruce, black cherry, eastern hemlock, eastern white pine, northern pin oak, paper birch and quaking aspen – could disappear.

And their departure will have a ripple effect.

“This least winter, when we had a prolonged period of cold and progressive winds; a lot of tree damage was tied to climate change,” said Lydia Scott, study co-author and director of the Chicago Region Trees Initiative at the Morton Arboretum in Lisle. “Trees are such a long-lived species, they are slow to adapt.”

Trees provide an estimated $51.2 billion in compensatory services to the public – filtering the air and absorbing storm runoff. But the care of those trees is more critical now than ever before. Climate change means there is a smaller margin for error. Avoiding certain species will help, but it is just part of a solution. Tree ordinances in unincorporated areas, regulating the removal of trees when land is developed, would be a good start. But we also need to plant more of the right type of tree. The Chicago area boasts a tree canopy of 18 percent, Scott said, compared to a national average of 40 percent.

“Trees impact us on a daily basis. Air quality and water quality problems are tied to a low tree canopy,” she said. “We’ve set a goal to increase the canopy by 4 percent by 2050. Our recommendation is that every person plant (at least) two trees by then.”

We can expect more drought conditions, flooding, wind and ice damage, unusual plant diseases and foreign invaders – such as the emerald ash borer and wild parsnip. But native species such as the burr oak and shagbark hickory have low vulnerability to these threats. Grab a shovel.

“We know that we will continue to have challenges if we don’t change our behavior,” Scott said. “We need to get our decision-makers on board so that they allocate funding. We want to keep the quality of life in the Chicago region high and we want it to be equitably distributed.”
To view the full report, visit https://www.fs.usda.gov/treesearch/pubs/54128.

Smithsonian Magazine reports that nearly 75 percent of U.S. homes have air conditioning, but that phenomenon really didn’t gather steam until the 1950s.

Willis Carrier, a 25-year-old electrical engineer, created a primitive cooling system to reduce the humidity plaguing printers at the Sackett-Wilhelms Lithographic and Publishing Co. of Brooklyn. In 1902 Carrier used an industrial fan to blow air over steam coils filled with cold water. The excess humidity condensed on the coils and produced cool air.

In 1915, he founded Carrier Corp. and by 1922, Carrier created a safer, smaller and more powerful Centrifugal Refrigeration Compressor – the precursor to modern air conditioning.

“Today, a U.S. household is more likely to have central air conditioning or a window unit than it is to have a dining room, garage or even a dishwasher,” author Haleema Shah wrote. “Though humans in hot climates around the world have cooled themselves with fans, fountains and natural ventilation systems for centuries, only the U.S. consumes energy for air conditioning to the extent it does—more than the rest of the nations in the world combined. In 2016, the United States used about 616 terawhatt hours (TWh) of electricity for air conditioning, while the European Union with a population one and a half times larger, used just 152 TWh for the same purpose.”

Businesses and nonprofits that that have operated continuously in the state for at least 100 years are eligible for an Illinois State Historical Society Centennial Award.

Download a copy of the application from the ISHS website – www.historyillinois.org – and mail it, the appropriate documentation and a non-refundable administrative fee of $50 to the Illinois State Historical Society, Centennial Awards, 5255 Shepherd Road, Springfield, IL 62703.

• Kurt Begalka is administrator of the McHenry County Historical Society & Museum. He may be reached at kurt@mchenrycountyhistory.org