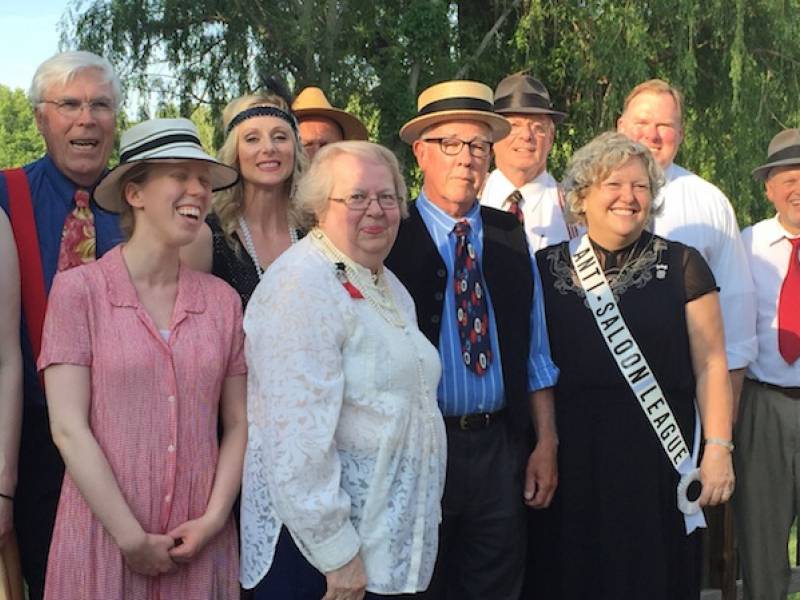 Every Summer the Perkins Hall Players re-enact an event in local history.

June 10th, 7 pm. Perkins Hall Players presents a historic drama. Named after a noted Kentucky Derby entrant, the “Bubbling Over” was the most notorious speakeasy in McHenry County during Prohibition. Listen in while members of the "Law & Order League" attempt to close this den of inequity – staged at the site of the former tavern, now the Old Rivers Inn, at 17112 Route 14 in Woodstock. Period clothing encouraged. Free admission. Light refreshments.

Originally scheduled for June 12th, the event was held on August 7th, 2013:

It is September 1941 and emotions are running high inside Lilly Lake. Questions that surrounded the village’s incorporation in 1938 – including the validity of votes and its boundaries – remain. There have been allegations of assault and political interference, contempt of court and fraud. It has led to what the press described as “riotous behavior.”

In fact, the rift is so bad that many of those who backed formation of the village just a few years before now are calling for its end.

On this night we are gathered at the nearby McHenry Town Hall (actually Perkins Hall – i.e. the old Seneca Towship Hall), where McHenry Township Supervisor Math N. Schmitt (narrator Don Perkins) has agreed to host a public meeting in an effort to stop the feuding and rancor.