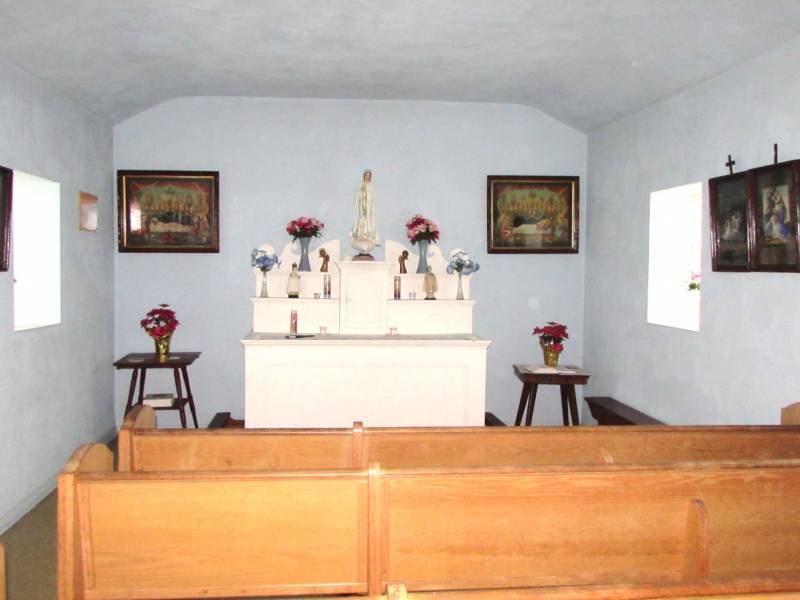 If you didn’t know it was there, you wouldn’t give the nondescript, white building a second thought, but behind the cider-block facade is a gem, a little bit of history that has managed to survive the indifference of past owners and growing development along Chapel Hill Road near Johnsburg.

Step inside Schmitt Chapel and embrace its simple pleasures – from original paintings depicting the Stations of the Cross and a statue of the Virgin Mary to some well-worn, but welcoming pews. The place gathers you in and, in its own way, restores your soul – a mere feet away from a fairway.

Located at 2500 N. Chapel Hill Road, the chapel is part of the 99-acre Chapel Hill Country Club – owned for the past three years, after foreclosure, by Cole Taylor Bank. According to Jean Thompson, asset manager in the bank’s Rosemont office, the property is listed for just under $1.5 million and includes a “couple dozen” parcels with their own property index numbers, including the chapel site.

The chapel was built in 1843 by Frederich Schmitt, about a mile south of Johnsburg on what was originally Pistakee Bay Road. While on the journey from Germany, the ship that carried Schmitt encountered a severe storm. Fearing for his life, Schmitt promised if he survived the voyage, he would build a chapel.

Schmitt and his fellow German settlers in Johnsburg made good on the pledge a year later. The first chapel, made of logs, was used for nearly 10 years. In 1853, a larger chapel – 16 feet by 22 feet – was built of bricks. It was enlarged in 1878 to nearly 500 square feet and was used by the community as a place of spiritual reflection; where they would go in groups to pray for good crops, favorable weather and healing for the sick and needy.

The chapel was remodeled again in 1956. An asphalt shingle roof was applied, and new glass block windows were used to prevent golf balls from shattering the windows. Descendants of Schmitt recently replaced the roof, which had been damaged from a small electrical fire caused by a malfunctioning lighted cross placed atop it in the 1990s.

Schmitt’s daughter, Margaretha, married John Huemann’s great grandfather, Johann Huemann. The property’s other hands-on caretaker, Mike McEvoy, also is related to Huemann by marriage. Both make a point of stopping by regularly to tidy up the chapel. McEvoy even brought a replica of Our Lady of Fátima back from Portugal to replace the statue that had gone missing from the alter. They wish to continue caring for the chapel in perpetuity.

“My whole concern is that, down the road, someone who has no ties to it doesn’t care less and wants to invest in the property, may just take it down,” Marciniak said.

“We’ve got all the documents and title stuff; the whole history of it,” said Huemann, a village trustee in Johnsburg.

What they don’t have is legal possession.

“There are a lot of things that we hope to do once we have legal access to it,” said McEvoy, but he confessed it has become a more complicated than he ever dreamed.

For the past few years, the bank has leased the course to GolfVisions Management Inc. of Mundelein, one of 13 18-hole facilities it manages in the Chicago area. To date, no one has stepped forward to buy the property, and the bank believes the decision on what to do with the chapel should be made by the new owner.

“I just can’t give it away, donate it or whatever,” Cole Taylor Bank’s Thompson said of the nine-tenths of an acre that contains the chapel. “It is part of the property. The property is valued as a whole, not as segments.”

In the meantime, Thompson said the bank worries about such secular issues as security and liability, and she intends to share those concerns with GolfVisions. She believes the chapel should be locked at all times, for the good of all concerned.

“What we’re trying to do is make sure it’s secured and there are no problems there right now. We want to make sure who is coming and going,” Thompson said. “And right now that falls under the jurisdiction of the golf operator. … I’m trying to make sure it (chapel) will stay there.”

Not coincidentally, that is what Huemann and McEvoy want, as well.
•••
The McHenry County Historical Society & Museum hosts the last in its Sampler Lecture Series at 3 p.m. April 18 at the museum, 6422 Main St., Union. Between 1910 and the 1950s in the U.S., particularly the Midwest, railroads employed a large number of Mexican immigrants to lay track. In “The History of Mexican Railroad Boxcar Communities in the Chicago Area & Midwest,” presenter Antonio Delgado highlights the important contributions these laborers made to the area. A $10 donation is requested.