Past offers clues to Fox River flooding, our future

Home » Past offers clues to Fox River flooding, our future 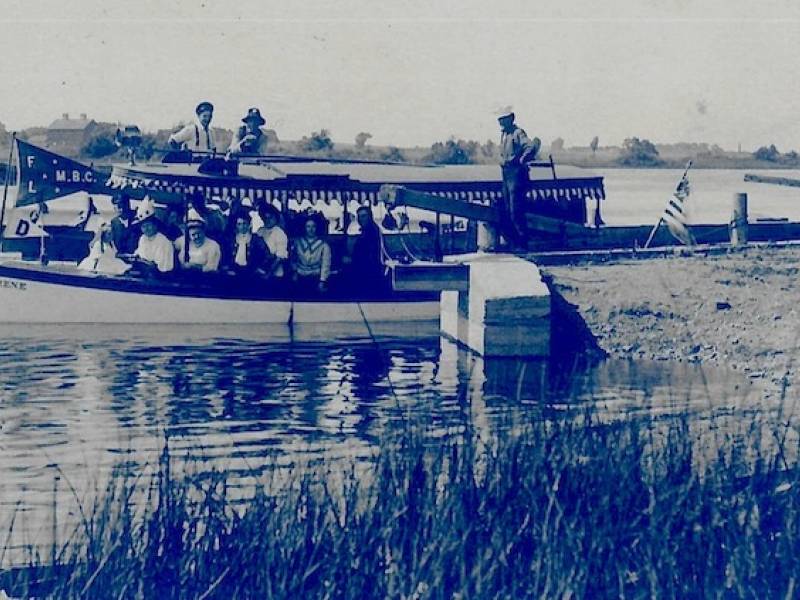 Past offers clues to Fox River flooding, our future

CAPTON: Before Illinois discovered that the Chain O' Lakes was a major recreational area and a big moneymaker for local businesses, a privately funded dam, seen here, was built across the Fox River below McHenry to allow the Chain O' Lakes to be deep enough for recreational boat travel. The tour boat pictured, exiting the lock under the watchful eye of the lock tender (far right) in the 1910s, ferried tourists from all over the Chicago area to visit the massive “lotus beds” that grew all across the Chain. The McHenry County Historical Society has reproduced a portion of this experience at the society’s museum in Union. Visit www.gothistory.org for details.

The rain’s a pain when it falls mainly on the plains.

Residents of McHenry and Lake counties know this all too well.

The Fox River crested last month at its headwaters in New Munster, Wisconsin, at 7½ over flood stage
(10 feet) and eclipsed the record by more than 2 feet.

Downstream at the William G. Stratton-Thomas A. Bolger Lock and Dam in McHenry, the crest surpassed the record 7.62 feet, recorded during the 2013 flood. And the Algonquin dam crested at 13 feet, breaking the 2013 record of 12.7 feet, before subsiding to 8.3 feet by Aug. 4.

Greg Vogel, a contract archaeologist and former assistant professor of anthropology at Southern Illinois University-Edwardsville, has made a science out of studying natural disasters in our area. And at the top of the list is flooding.

Once early civilizations made the transition from mobile hunter-gatherers to a more permanent agrarian society, the fertile bottom lands became an enticing option in order to feed burgeoning populations. But there was a trade-off: flooding.

“We can see a lot of archaeological spots by the river – soil records and how they affect prehistoric societies,” Vogel said. “There are some real boom-bust cycles, and this dynamic plays out all over the world.”

In more recent times, human beings have magnified the negative effects of these cycles by building in places where they shouldn’t. Summer cottages have been replaced by large homes with patios, creating additional runoff, which almost immediately empties into the river before it can be absorbed into surrounding soils.

“In McHenry County, there is very little zoning for flood runoff,” Vogel said. “The land is not designed to accommodate this kind of thing.”

Add man-made dams and levies into the mix, and satisfying the river’s many interests – from a recreational resource and fishery to a source of drinking water – can be a tall order.

“Because we don’t have 500 years of flood records, we’re not sure how to deal with it,” Vogel said. “There are a lot of unknowns about floods of this magnitude. But we do know that in the prehistoric record, we can look at soils over the last 8,000 years where there were dozens of floods much larger than anything we’ve seen in history – two to three times worse than in 1993. They most certainly will happen again.”

Local high schools have until Sept. 15 to apply for the Capitol Forum on America’s Future – a yearlong social studies program brokered through Illinois Humanities, which supports teachers in their social studies classrooms, addresses current global issues and encourages civic engagement among students.

Guided by their social studies teachers, students use case studies and readings about policy issues such as immigration, climate change, genocide and nuclear proliferation to make informed decisions and take action through a post-forum discussion in April at Illinois State University. There students will deliberate case studies, meet with university professors and other experts, and engage in an options simulation with their peers from across the state.

Fifteen to 20 high schools will be selected to participate in this year’s Capitol Forum, which kicks off with an introductory workshop in October. For information or to apply, visit www.ilhumanities.org/program/capitol-forum-on-americas-future/.

Tickets are on sale for the McHenry County Historical Society’s historic, two-hour boat tour of Pistakee Bay at 1 p.m Sept. 10. This society is collaborating with Ala Carte Entertainment and Famous Freddie’s of Fox Lake to offer this unique opportunity. Learn about the geography, famed lotus beds and once thriving resort scene. Seating is limited. For information, visit www.gothistory.org.