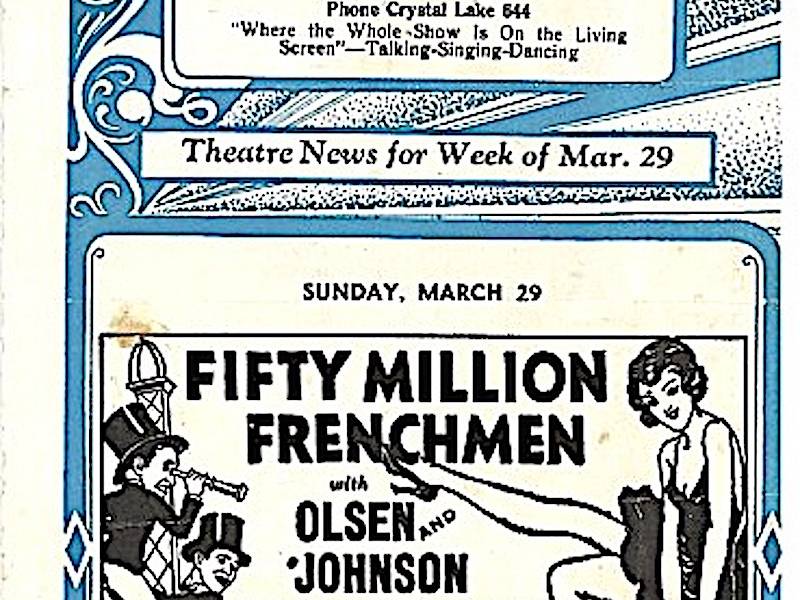 The possible demise of the latest in a long line of historic theaters is impossible to ignore. We are facing the exsanguination of these cultural icons – victims of public complacency and movie studio greed.

Park Ridge’s Pickwick, a former vaudeville house dating to 1928, is in danger of closing for good … or worse, being converted into an alternative use. It’s inclusion on the National Register of Historic Places in 1975 only protects the building’s Art Deco façade and its trademark 100-foot tower.

“Being a landmark in the middle of town at the highest point in Park Ridge, we’d like to preserve it the way it is,” said Cheryl Williams, president of the Park Ridge Historical Society. “The theater looks like it did way back when. They still have the old pipe organ that lowers into the floor, and it is still workable.”

Going out to see a movie used to be an experience. Theaters were ornate, many adopting an Egyptian or exotic foreign look. Examples include the El Tovar (now the Raue) in Crystal Lake, The Princess (now Classic Cinema’s Woodstock Theatre) and the Catlow (now the Catlow Arts Center) of Barrington.

Tim O’Connor and his sister, Cindy Williams, made changes since buying the Catlow in 1988. They incorporated menu items from their Baloney Sandwich Shop, located in the same building. They rented out the theater marquee for personal messages and the building for private parties. They sold wine, beer, hard seltzer, fountain soda drinks and concessions via a curbside service. In October, they sold the theater to local businessman Brian Long.

The Catlow, added to the National Register of Historic Places in 1989, was designed by the Chicago architectural firm of Betts & Holcomb. The interior is in a English Tudor Revival style, meant to create the feel of a medieval English hall. Renowned sculptor and designer, Alfonso Iannelli. added stenciling on the Catlow’s ceiling, walls and beams along with the sculpted gargoyle-like heads that border each ceiling truss.

Ironically, the blueprints for the Catlow Theater were intended for the Pickwick. When Pickwick owners, William F. McCaughey and Iannelli (a Park Ridge resident), opted for a different style, Wright Catlow acquired the plans for his new theater on West Main Street in Barrington. The Catlow Theater opened in May 1927, providing a venue for vaudeville acts and performers who appeared on the WLS “Barn Dance” radio program. Among the last live acts to appear on the Catlow’s stage was world famous fan dancer Sally Rand in 1933.

By the early 1930s, the Catlow was being used exclusively as a movie house. Now you can’t see a movie there.

The Pickwick’s owners told news outlets that they have been losing money since the onset of COVID in 2020 – despite investing $1.2 million a decade ago in repairs to the roof, mechanical systems and exterior.

“The last three years have been very trying,” said co-owner Dino Vlahakis, who added the Pickwick has been averaging half the 2,000 the patrons it needs per week to make it. “With [COVID-19], we were shut down for a whole year and then during that time movie companies went to streaming. We just don’t have any product. You need a good movie every week.”

About 500 screens have closed since the pandemic began, according to the National Association of Theater Owners, a trade organization. More are expected to shutter in the wake of Cineworld, which operates Regal Cinemas, filing for bankruptcy in September. It is second largest theater chain in the world behind AMC.

But what about independent theaters?

Vlahakis said when he bought the Pickwick in 1981, half of the nation’s theaters were independent. That subsequently fell to about 5%.

“I think movie theaters will always be around. You can’t match the feeling of 200 to 300 people laughing simultaneously,” Vlahakis said. “But I think we’re going to lose 25% – unfortunately, that is gong to be ma-and-pa places. I don’t see any future in it.”

Last spring, the McHenry Downtown Theater announced it would no longer show motion pictures and would renovate the interior to accommodate live shows. It combined two of the three theaters, created by previous owners in 2018, into one room and expanded the stage. Prior to that it had been shuttered four years.

“We thought ‘Let’s tear this wall down and make it into a real live event venue,’ ” said Mike Sullivan, former head of digital marketing for Ticketmaster and an investor in the new Vixen venue. “We opened up the space a little. It can hold 700, standing room only. If you are looking at all seats, it can seat 450 to 500 people.”

Sullivan, who since sold his shares to partner and McHenry Mayor Wayne Jett, blames the pandemic and studio streaming for the decline of movie houses. Innovative approaches, such as selling popcorn and drinks curbside, bought theater owners some time. But people have become used to staying home. Not even movies such as “Top Gun: Maverick” or the new Avatar sequel are enough.

Sullivan said it would take a blockbuster every month to save the industry, which has seen its profit margins dwindle. Eight-five to 90% of ticket revenue goes toward paying for the movies, he said, and it can take up to six weeks for those movies to show up on the big screen following their release on streaming platforms.

“By that time, people have already seen them,” Sullivan said.