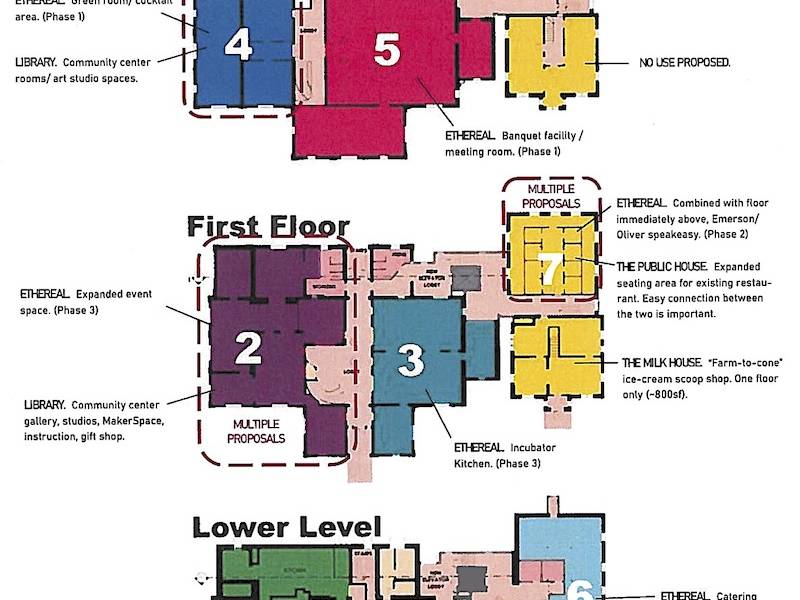 Since taking ownership of the former McHenry County Courthouse and Sheriff’s House in December 2011, the city of Woodstock has sunk an estimated $3.5 million into stabilizing the buildings  – everything from window replacement to tuck pointing; heating and ventilation upgrades, new front steps and, repairs to the roof and cupola.

But there are indications that all of this time and money might finally pay off – although not without some collateral casualties. Northwest Area Arts Council, a loyal tenant for 30 years will move out at the end of 2020.

There is a difference of opinion on who forced that issue, but one thing cannot be disputed: Its departure, like that of the Dick Tracy Museum before it, will eliminate a cultural draw to the Square with many secondary economic benefits. When people gathered Saturday night during the opening reception for 33rd annual Women’s Works art show, I suspect people also went out for dinner or grabbed a drink.

Victoria Senn, manager of the Old Courthouse Arts Center, said NAAC has been working with McHenry since last fall and the organization is optimistic it will relocate into the former McHenry police station on Green Street. It affords space for an expanded gallery for 20 to 30 studios and an art school.

“The chamber and city really want us there,” she said. “We like the liveliness in the area and the foot traffic.”

Woodstock anticipates new tenants will begin moving in next summer. Between now and then, the city is working with the nonprofit Friends of the Old Courthouse to launch a new limited liability corporation in which the city will be a minority stakeholder. That will allow it to apply for the necessary tax credits to fund additional repairs.

“We will need a for-profit partner who puts money into the project in order to take advantage of those tax credits,” Woodstock City Planner Darrell Moore said. “In simple terms, the investor gives us, up front, about 60 percent of the anticipated tax credits to be earned on the project. After the project is completed, 100% – technically 99% – of the tax credits that come back from the state and federal government over the next five years go to the investor. This allows for a guaranteed return on investment, which is a typical arrangement in these types of renovations.

“Total tax credits paid out on this project (with approximately $5.4 million in eligible expenditures) is projected to be $2.3 million – out of which the city would benefit somewhere around $1.4 million.”

The conceptual layout of the complex envisions seven to 10 zones for potential tenants with three stairways, a common elevator and six common washrooms. Several reuse proposals were submitted to the city before the Dec. 30 deadline. They include:

• Woodstock Public House wishes to expand dining into the jail area on the first floor of the sheriff’s house. They intend to retain the jail cells and use them for dining – underscoring the importance of maintaining the connection between the jail and its existing 4,200-square-foot restaurant space. Owner Kathryn Loprino also hopes to expand outdoor seating by creating an outdoor patio dining space behind the sheriff’s house and/or on the grassy area in front of the courthouse – as well as have secure storage in the sheriff’s house basement.

• Pingree Grove-based Milk House Ice Cream hopes to repurpose the lower level of Sheriff’s House, about 800 square feet, and the adjacent front patio as a satellite retail location for its “small batch,” “super-premium” ice cream. Owners Brook and Wyman “Clint” Carey project an estimated price point of between $3 and $6 for items.

• Miguel Acosta of Chicago is eying the first and second floors of the sheriff’s house for a restaurant, art and music classrooms, and a facility for medieval martial arts, cross-fit training space and a haunted house.

• The Woodstock Public Library is proposing an arts-focused community center and art studios in about 2,500 square feet on the first floor – formerly occupied by the art gallery – and immediately above it occupying 1,400 square feet on the second floor. The proposal mentions “semi-permanent” displays and local artists, plus office space, a classroom and storage.

• Woodstock chocolatier Ethereal submitted a multi-phase plan for repurposing portions of the courthouse and sheriff’s house. Phase I envision a banquet facility and meeting space in the 2,000-square-foot courtroom on the second floor, supported by a 2,000-square-foot catering kitchen in the basement of the sheriff’s house. It would operate in tandem with events in the company’s newly refurbished headquarters, next door in the former Elks’ lodge at 140 Cass St.

Phase II would relocate the Emerson & Oliver speakeasy from its cramped basement location beneath the chocolate kitchen and café on Cass Street. The vision is to create a live music and upscale cocktail destination on the first- and second-floor of the jail. Phase III also eyes the same space coveted by the library for use as an expanded event space and “green room” cocktail area. It also seeks to convert the former clerk’s area and gallery space across the hall into an incubator kitchen. The Old Courthouse and Sheriff’s House Advisory Commission identified such a kitchen, potentially supporting the development of numerous up-and-coming businesses, as desirable.

The speakeasy and banquet hall would be accessible from main stairway in front of building and by a new rear lobby, stairway and elevator that would replace the two-story, 500-square-foot addition added in 1914.

“Eligible expenditures will be determined by the National Park Service and the state historic preservation office,” Moore said of the tax credits. “Anything that helps to restore the building in support of its historical significance is potentially eligible. However, some parts are necessary but ineligible, the largest of which is our plans for a new connector building and elevator.”

The courthouse was in use until operations relocated to the north edge of Woodstock in 1972. Private investors bought the property in 1973 and managed it until the city acquired it. It has been listed on the National Register of Historic Places since 1974.
•••
Katherine Hamilton-Smith’s presentation,  “Picture Postcards: The Happy Invention,” has been postponed until 4 p.m. Monday, May 11. It will remain at the county history museum, 6422 Main St. in Union. The first picture postcards in America were printed for the 1893 World’s Columbian Exposition in Chicago. Hamilton-Smith, now with the Lake County Forest Preserve District, created and developed the Curt Teich Postcard Archives housed at the Newberry Library in Chicago.

For details visit www.gothistory.org. Special thanks to Illinois Humanities for helping make this program possible.

• Kurt Begalka is administrator of the McHenry County Historical Society & Museum. He may be reached at 815-923-2267.