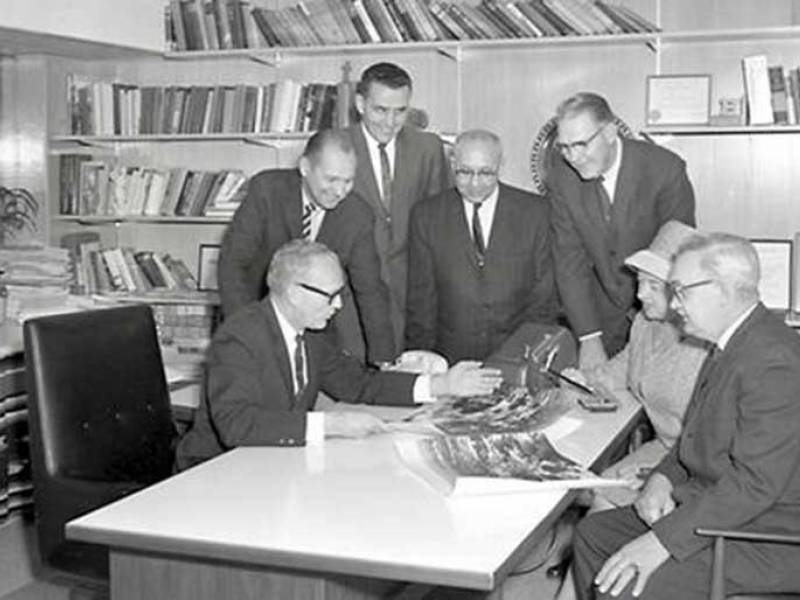 MAY 2013 - John Strohm began his presentation with panache.

“It’s easy to bellyache about lazy Washington bureaucrats and corrupt State House politicians,” the Woodstock Citizens Committee leader wrote in his presentation to the All-America Cities Jury in 1963. “But only if we make our own local government work, so we have the right to complain about big government. For the foundation for democracy surely begins at home.

“A few years ago, our Woodstock citizens seemed to have forgotten that fact: Our city was stagnant, schools mediocre, parks non-existent. City pride was at a ‘ho-hum’ level. ‘Let George do it’ was our philosophy. Many of our officials were petty, arrogant or ineffectual.

Then a group of citizens organized to campaign for the city manager form of government. It was a bitterly fought election, but the nonpartisan reform ticket won, and Woodstock began slowly to wake up. The groundwork was laid for a revival of citizen action ... and deeds.”

That effort beget an eight-prong “platform for progress” that stressed safety, jobs, health, education, citizenship, improved living, culture and more fun. And that, in turn, served as a catalyst for a year-long, full-court effort that led to a successful presentation before the All-America Cities Jury in December 1963 and the city’s inclusion as one of 11 All-America communities in March 1964.

Strohm was among a handful of leaders who spearheaded the All-Amercian City effort. T hey included attorney Dave Joselyn, Dan Andrew, Don Peasley and Virgil Smith. Sadly, all but one have died. Smith, 89, who lives at Valley-Hi Nursing Home, credited his colleagues’ single -minded purpose and creativity with carrying the day.

“There was never a question of how,” Smith said. “We just did it.”

Smith said the citizens of Woodstock were proud to have been nominated and even proud er to have been selected as one of 11 All-America Cities. A jury headed by George H. Gallup, dir ector of the America Institute of Public Opinion and chairman of the Council of the National Municipal League, helped glean 22 finalist cities from the 88 entrants.

Woodstock’s 31-member delegation to Detroit was so large, Smith recalled, it took the jury by surprise.

“The committee asked ‘Who’s at home running the store?’ You’re all here from Woodstock,” Smith said with a grin.

Smith also credited Peasley’s eight 50-by-70-inch photos, which illustrated the theme of “Woodstock on the Move,” with catching the selection committee’s attention. Shortly before he died May 3, Peasley said the larger-than-life photos were just the ticket after a long day of presentations. Woodstock was the last presenter in Detroit.

• Within a two-year period, seven new industries came to town. Morton Chemical Co. broke the ice by building a research laboratory in Woodstock. But it was Borden Company’s decision to construct a 118,000-square-foot plant, in what is now Clausen Pickle, that was the game-changer.

• Construction of a Route 14 bypass

• A parks expansion that included the purchase of 17 wooded acres known today as Ryder’s Woods.

• Construction of a $240,000 swimming pool, spearheaded by 72 civic organizations during a referendum campaign in 1962. • A new $265,000 hospital wing and department of pediatrics.

• Creation of the church-sponsored Clothing Closet resale shop to aid the needy. It continues to thrive.

The National Municipal League and Look Magazine presented Woodstock with its All-America City Award during a formal banquet April 16, 1964. The celebration culminated Aug. 2 that year with a daylong celebration officiated by Mayor Thore Emricson.

An estimated 4,000 people participated in the All-America City campaign, working on everything from a bike safety campaign to organizing white elephant sales. They hosted foreign exchange students. They joined forces to lay the groundwork for a community college. Leaders o f the Junior Civic Arts League banded together to create the Woodstock Fine Arts Association and spearhead the painting and rewiring of the then-dilapidated Woodstock Opera House.

And if that wasn’t enough (and it wasn’t), in November 1963, Dorothy McEachren founded the McHenry County Historical Society in Woodstock. More than 600 people became charter m embers. The Society had a Woodstock office in the Opera House and former First National Bank building before relocating to Union in 1972.

It took a year-long, community wide effort before Woodstock was able to raise the purple and white All-America City flag on March 30, 1964. Smith credited it with breathing life into a town that had become complacent, even apathetic.

Smith said the legacy of Woodstock’s All-America City honor remains strong even today , 50 years later. It is a testament to power of positive thinking and cooperation.

“We didn’t care about who got the credit,” Smith said. “Brag about what you’re doing. ”

Composer John Zaumeyer and lyricist Lee Kortenmeier, put it this way in their song “Woodstock On Parade.” You can listen for yourself at the exhibit. “ ... What we want we will get, hard work is our creed. You will find finer homes, door to door –

A new school, government, anything we need;

These we get, and for sure, so much more.

Young and old, rich or poor, each a place to fill.

Better life we enjoy, here in our Woodstock