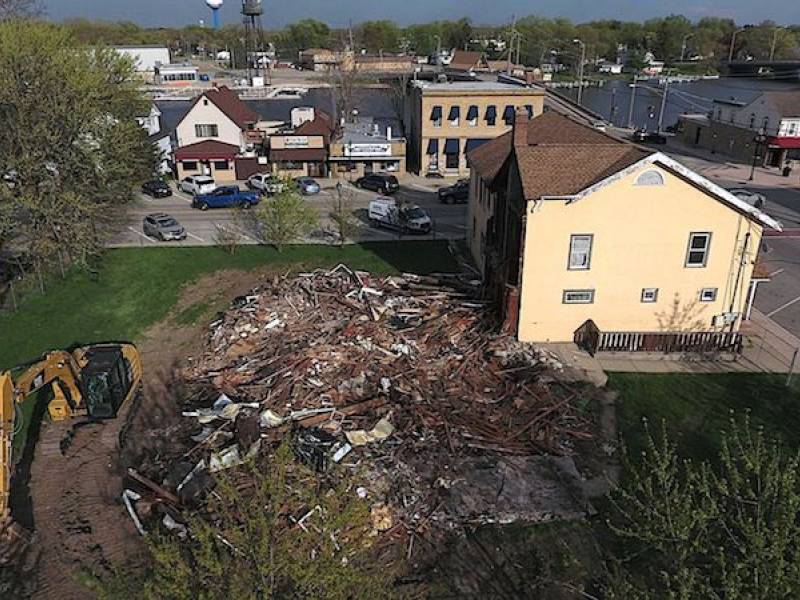 McHenry County’s first courthouse is returning to relevancy, although for a markedly different purpose.

Skokie-based Kopley Group plans to turn the 1838 structure – originally located in what is now Veterans Park – into a tavern showcasing the building’s history at the county’s first government center, said Ross Polerecky, the city of McHenry’s director of community development.

When Lake County split off from McHenry County in 1844, the county seat moved farther west to Centerville, what is now Woodstock.

Sheriff Henry M. Wait conducted a public sale of the former courthouse Jan. 8, 1844. The buyer, Horace Long, moved the building from the park to 1401 N. Riverside Drive. It has had many subsequent uses, most recently as the Town Club, but its significance endured.

Polerecky said the additions cobbled onto the original building were demolished on April 29, as part of a yet-to-be-unveiled site plan that will include a new restaurant next door. However, Kopley does intend to recapture the historic look of the courthouse.

That is welcome news.

It is part of a streetscape plan under development by consultant Christopher B. Burke Engineering of Rosemont. Central to that effort is capitalizing on the on the Riverwalk along the Fox and reconnecting with McHenry’s past by rebranding neighborhoods such as Gagetown (Main Street), Centerville (Green Street) and Riverside (Riverside Drive).

City Administrator Derik Morefield acknowledged connecting the city’s three historic neighborhoods will take time, but municipal leaders are convinced that revisiting the past will position McHenry for the future.

“The Riverwalk will go behind Landmark School, up the hill to Rotary Park and then tie into Main Street. In between are five blocks of residential neighborhood,” Morefield said. “We’ll have to have some vision and try and connect it with breadcrumbs.”

And why not? Woodstock has learned that preserving and celebrating historic architecture can pay off in a big way – including revenue from film crews, tourism, hotel bookings and dining. Nightly weather camera footage from Old Courthouse roof doesn’t hurt, either.

This lesson has not been lost on a group of history minded activists in Richmond. They created W.A. McConnell Foundation – a nonprofit organization that seeks to “identify, preserve, and promote historical structures” in and around the village.

In its grant application to the Community Foundation of McHenry County, the fledgling group reiterated the need for intervention:

“Recently, our town has seen an increase in the demolition of historical buildings as a quick way to bring in new tax growth for the village. This drive seems to have escalated during the time of COVID. We have seen the demolition of our historic sawmill. We have seen the transfer of our historic Memorial Hall from public hands to private hands, with no protections made for its historic ‘raked stage’ or other elements, which led to their planned demolition within just days of the sale. The mausoleum which houses the final resting place of the town’s original founder lies in an undignified state of disrepair.”

Foundation Vice President Allison Kessel Clark said a top priority is creating an inventory of historic structures in town, followed by the adoption of a long-range development plan grounded in preservation.

“There is no downtown plan for the next five or 10 years,” Kessel Clark said. “Nobody is minding the store. … The historic element of Richmond is not a brand anymore.”

Richmond’s Unified Development Ordinance, adopted in April 2009, clearly underscores the importance of history in the central business district and the historic district which mirrors it. The Historic Overlay District was established to “encourage the restoration, preservation, rehabilitation and conservation of neighborhoods, districts, buildings, sites and objects of historical and/or architectural significance and to prevent the decline, decay and/or demolition of such neighborhoods, districts, buildings, sites and objects.”

The ordinance calls for preservation call for the “protection, enhancement, perpetuation, and use of improvements and areas of special character or special historic and aesthetic interest or value.”

To ensure these objectives are met, the review process includes village staff, a public meeting before the Community Development Committee and approval by the village board. That still has not occurred for Memorial Hall ­ – a 1906 landmark that is on the National Register of Historic Places landmark.

Meanwhile, the public is left to wonder.

“Because there is so much to do, there is opportunity for dreaming,” Kessel Clark said. “Dreaming is great, but we have to get the wheels on the road and start moving.”

The McHenry County Historical Society is shaking off its COVID-19 coils with museum visits, third-Saturday programming and the return of Heritage Fair – with its celebrated car show along Main Street – on July 11. For details, go to GotHistory.org.