Lessons from the past

Home » Lessons from the past 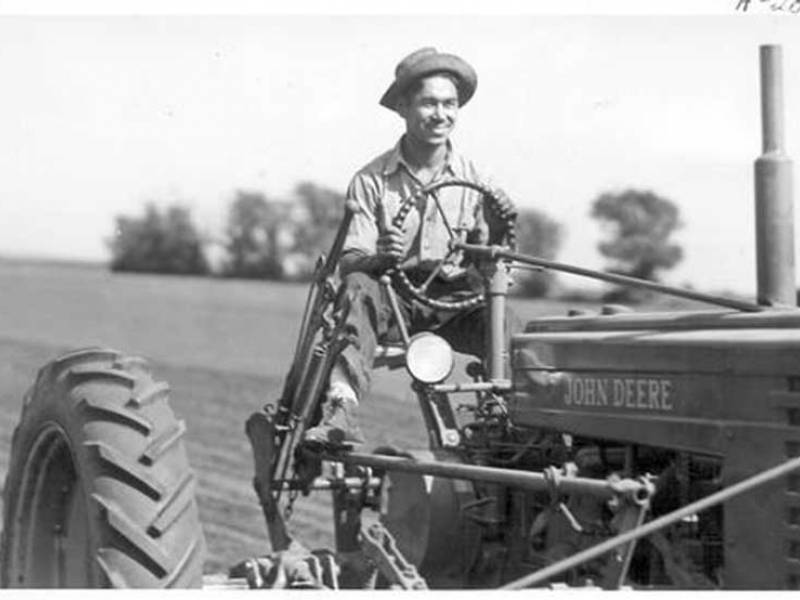 Lessons from the past

JANUARY 2015-At a time when some in this country feel a sense of antipathy toward Arab-Americans living among us, it is worth remembering that during World War II a number of Japanese-Americans – as well as German prisoners of war – were working and living in McHenry County.

Often forgotten is that numerous German POWs from the infamous “Africa Corps” worked here during the war in places such as Hinner’s Rose Farm. Located on the west side of Woodstock, the farm employed between 30 and 100 prisoners sent down from Camp Grant in Rockford.

The Hughes Seed farm off Route 14 west of Woodstock employed, for very small wages, a couple of dozen prisoner detasselers. Even the Northwood Mink Farm outside Cary used prisoner labor as workers in wartime agricultural fields. Numerous German prisoners labored in fields around Sycamore between 1943 and 1946. Historians tend to agree that “surviving POWs had fond reminiscences of their humane treatment at the hands of the Americans.”

Arnold Krammer, history professor and author of the book “Nazi Prisoners of War in America,” states: “It might be galling to think about it now, but at the time, our greatest hatred was saved for the Japanese.”

As a post-Pearl Harbor hysteria swept across especially the western third of the United States, large numbers of Japanese who were living in the United States at the time were, along with their American-borne children, rounded up and sent to internment camps.

Many Japanese – even those who had lived and worked in the U.S. for years and owned homes – were deprived from living freely in all of California, as well as eastern Oregon and Washington. Those swept up were not allowed time to make a reasonable disposition of their assets.

Whole families, even whole neighborhoods, were ordered to quickly pack up suitcases and board buses and Army trucks for long, often frigid rides to a number of relocation camps. Often built in deserts and dry mountain areas, these hastily constructed barracks served as harsh homes to many thousands of internees. Some of the most notorious were Manzanar and Tule Lake in California, as well as in Topaz, Utah.

Eventually, labor contractors came to the camps and offered internees a chance to leave the camps and work in farm fields across the country. This was done because of war-related shortages of male farm laborers. As the draft began draining manpower, some suggested asking children of internees, often described as “Nisei” (second generation Japanese-Americans) to join the fight.

Although the military strongly resisted the idea (keeping in mind that strong racist attitudes permeated the military at that time), a number of regiments were recruited out of the camps. One of them, the 442nd Regimental Combat Team, fought valiantly in the bloody Italian campaign of 1944-45, winning commendation as one of most decorated groups to fight during the war.

It was only in 1988 during the Ronald Reagan administration that the United States government began to make reparations to surviving Japanese-Americans who had been subjected to forced removal from their homes and neighborhoods. Some of those families were brought from the relocation camps to McHenry County to work.

“About 1942, Mr. Curtiss of ‘Baby Ruth’ candy fame, started a farm enterprise: A chicken farm north of Arlington Heights, a livestock farm at Cary, Ill., and a potato farm at Marengo. For labor, which was in short supply during the war, he contacted the WRA, or the War Relocation Authority, in the Japanese internment camps. Three families came to Marengo, the Kometani family on Locust Street, the Yeda family on Route 20, and the Yama Okas at Marengo Road.” [Shuji and Marge Kimura moved to Crystal Lake from the Tule Lake camp.]

Three American-born Japanese-American men were brought to Marengo in mid-April 1943 ahead of those families. A front page article in the Marengo Republican on April 22, 1943, noted that the men, as well as the families to follow, were “experts in every line of truck gardening” and were “prosperous farmers and land owners” who were “born in this country and speak only the American language.”

They arrived in Marengo from the concentration camp in Tule Lake, California. The men quickly discovered that they were absolutely not welcome 3 miles away in town. A front page headline in the April 25, 1943, Chicago Tribune proclaimed: “Object to Jap farmer group near Marengo.”

“These may be good people and entitled to respect as American citizens, but I don’t think they should be allowed to come to town,” Marengo Mayor W. L Miller was quoted as saying. “Too many people here have boys in the service, and they just don’t like having Japs around. We’ve read too much about the Japs becoming citizens so they can spy on us.”

Miller took the Curtiss Co. to task for not sufficiently gauging public sentiment before bringing Japanese-Americans to Marengo.

Charles H. Doolittle, the commander of the local American Legion post concurred, stating “I would fight for their rights in Marengo if they were living in Arkansas or Idaho.”

Today, a person might wonder what was in the minds of Miller and Doolittle and the people they represented at that time. Could they have been propagandized over the years by visions of a “yellow peril” to an “American way?” These attitudes had been instilled in the public over the years by many of the nation’s newspapers, since the importation of Chinese labor began in the 1860s with the construction of the Trans-continental railroad. The popular depiction in the press of Japanese in general as merciless barbarians certainly didn’t help.

Was it simply war hysteria? A number of middle-western cities blacked out at night in early 1942 fearing that they, too, might be bombed by the Japanese. Or was it simply that Japanese-Americans “just didn’t look like us” being one reason which Arnold Krammer gives as to why German POWs farm workers were generally accepted while Japanese-Americans often were not?

We will never know.

Earl Ishino told the Chicago Tribune he would prefer not to stay in the neighborhood unless they felt welcome as “American citizens and fellow farmers.” “We are Americans at heart,” Ishino said. “We have close friends in the Army. Our country is at war, and we feel the same as other Americans. We want America to win the war, and we are sad to hear to hear of the death of those who are fighting it.”

After leaders of the community’s Kiwanis Club and Baptist and Presbyterian churches spoke in favor of welcoming Japanese-American families to the community, a community straw poll was taken. The result was 62 in favor of a welcoming attitude with 21 against.

A Japanese-American family which came to Marengo in 1946 from the Tule Lake camp via Minidaka, Idaho, to work on the Curtiss farms was that of Susuma and Matsue Uyeda. One of their children, Rose, who was born in Marengo, noted that when she was asked about what her mother remembered of those days, her mother’s response was simple: She “did not care to remember those times.”

Writing in the 1980s, Shuji Kimura noted that, “Of the [Japanese-American] children who went to Marengo Community High School, many did well. [A daughter of the Kometani family] teaches music in the Ft. Wayne, Indana. One son worked as a chemist and another as a rocket engineer. A Yedas’ daughter was the homecoming queen one year.” An anonymous snippet found in the fi es of the McHenry Country Historical Society noted that it is “gratifying to be able to say that the younger people of the community set a high standard of conduct for their elders by accepting the Japanese boys and girls in their student body with sincere friendliness.”

That is a lesson worth remembering today.