Hop on the bus, Gus 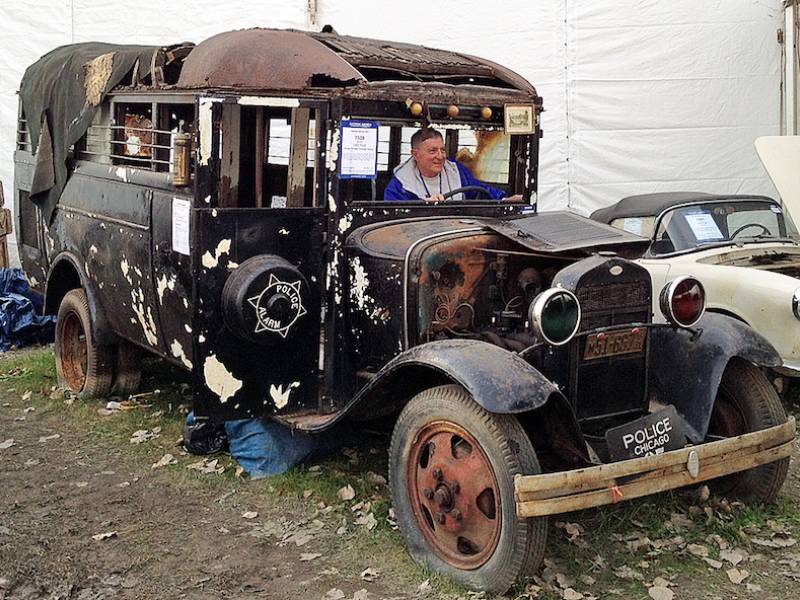 Hop on the bus, Gus

Woodstock’s Ken Ehrenhofer is driven to save our wheeled history.

He and his brother, Ron, grew up around classic cars. Their father was a foreign car mechanic. Their stepfather owned a 1927 Peerless. It’s no wonder they’ve probably restored close to 20 antique vehicles over the years – including a 1929 Model AA Ford fire engine paired with equipment supplied by the Boyer Fire Apparatus Co. of Logansport, Ind. It boasts its original Marengo Fire Department paint job.

“With us it’s always been about the history – not ‘how can I modify it?” Ken said. “For instance with the fire truck from Marengo, it was matter of what did it look like in 1929? To think there were real firemen who jumped on this thing! I can’t even imagine them doing that in the middle of winter.”

Their latest “memento to people in the past” is 1931 inter-urban passenger bus, which Ken purchased in 2011 from the estate of a collector in Glenview. The Model 330B bus, capable of seating 21, consists of a Ford chassis attached to metal and wood from the Union City Body Co. of Union City, Ind. The intent is to fully restore the bus, which Ehrenhofer donated to the Model A Ford Foundation, which then the foundation will lease to Model A Museum at the Gilmore Museum – a 90-acre historic campus in Hickory Corners, Mich.

First, they need to raise an estimated $80,000 to restore the bus. The lengthy punch list includes repainting the bus in its original teal blue, body and engine work, and a new roof – a canvas material with a rubberized coating.

“The chassis has been sent to a shop in Elk Grove Village for metal work. The floor went to Wisconsin and pieces of the wood roof are going to Michigan. They also plan on installing a new engine.

“It’s what we enjoy,” Ken said. “We’ve made a lot of friends. I’ve gotten to know movie people. (one of Ehrenhofer’s cars stared in the “Road to Perdition.”) … My main club is Model A. Restorers Club in Garden City, Mich. and my wife [Helen] is editor of the “Model A News.”

To help fund the cost of repairs, the Gilmore Museum is hosting a raffle. The grand prize is airfare and a two-night stay for two in Burbank, Calif.  It will include a tour of comedian Jay Leno’s extensive car collection. Tickets are $25 each and are available at www.gilmorecarmuseum.org.

More than anything, Ken wants people to be able to ride in it one day.
“We are heading toward this bus being able to give rides to visitors of the Gilmore Museum [following four to five years of restoration.] It is one thing to visit a car museum and a totally greater experience to go for a ride in one of those cars,” he said. “That’s what makes the Illinois Railway Museum such a fantastic place. Not only do you get to see all of that old equipment, you get to ride on some of it. That makes it real special.”

The Illinois Railway Museum hosts its 29th Annual Vintage Transport Extravaganza 10 a.m. to 6 p.m. Sunday, Aug., at the museum at 7000 Olson Road in Union. The unique event brings together a montage of antique vehicles on the campus of the nation’s largest operating railway museum.

In addition to some 500 antique vehicles that will be on display, the museum will be operating a variety of special equipment the day of the event. Frisco 2-10-0 1630 will be in operation, as will the “Nebraska Zephyr” and historic electric trains from the North Shore Line and Chicago Transit Authority. Streetcars including 1906 “Matchbox” 1374, “Green Hornet” 4391, and an open car from Veracruz, Mexico will carry passengers on the streetcar line.

Antique cars from Model T Fords all the way up to 1990s sports cars will be on display alongside historic motorbuses, trucks, electric trolley buses, and military and other vehicles. The show is open to all vehicles from 1999 and older. For more information on attending or bringing a vehicle to the event, call the museum office at 815-923-4391 or visit www.irm.org.
•••
I was pleased to read that the City of Aurora renewed its historic preservation grant program in an effort to preserve and revitalize historic and architecturally significant residential structures. The program offers between $5,000 and $20,000 for exterior, historic rehabilitation projects. All applications for more than $10,000 require a dollar-for-dollar match.

Grants provide financial assistance toward paying a contractor or for the reimbursement of building materials, if the property owners perform the work themselves.

There are limitations. There can be no more than two living units, unless it was originally intended as apartments. Buildings must be deemed historic by the Aurora Preservation Commission or the structure must have received a Historic Certificate of Appropriateness. Still, it is refreshing in this age of belt-tightening for a community to value its history and actually walk the talk – budgeting $100,000 toward the effort. Other communities should take note.

We hope to see you at the McHenry County Historical Society booth in Building F at this year’s McHenry County Fair. Not only will we have a photo display and a unique selection of antiques, unique gifts for sale, you could win a hand-sewn quilt made by our Heritage Quilters.

Other activities include a G-gauge model railroad operated by Kishwaukee Valley-Eakin Creek Railroad Club in Huntley and view a collection of service flags owned by Mark and Kristine Hutson of Harvard. For information, visit www.gothistory.org.

Published July 30, 2019 in the Northwest Herald