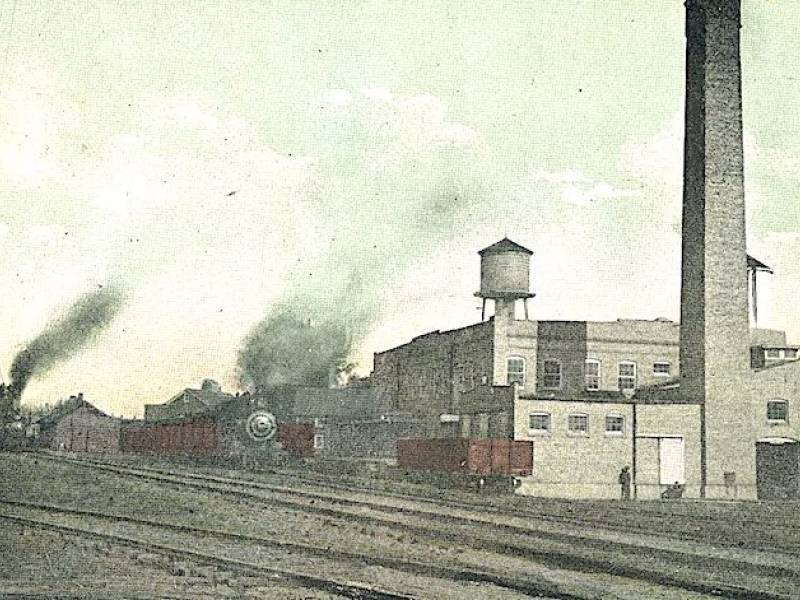 Huntley is in the unique position of being able to reimage its downtown, and Village Manager Dave Johnson said that historic preservation will integral to that plan.

“We want to create this sense of place and continue what we started,” Johnson said. “Unlike Harvard and Woodstock, Huntley’s downtown was small and very modest. We’re creating something. We’ve got the opportunity to create a new downtown. We’re enhancing what is there and looking to bring some 20 acres into the downtown.”

Expanding the square’s footprint, now about six acres, to include portions of Church and Mill streets is not that far-fetched. The village already owns the former H.D. Catty Corp. property at 11117 Church St. The century old building has a storied history that includes use as a creamery, dairy, brewery, farm implement dealership, fuse factory and, most recently, as a cellophane and aluminum foil packager. The village bought the abandoned plant on 2.8 acres in February 2017 for $435,690.

“The timing to begin construction on the Catty property is excellent,” Johnson told the village board at a special Dec. 5 meeting.

Andrew Burns, chief executive officer of Emmett’s Brewing Co, is one of four partners in the redevelopment venture at 11117 S. Church St. He said the objective of Landmark 11117, LLC is to begin construction next summer. But a lot still has to happen following the Huntley Village Board’s unanimous approval Dec. 5 of a resolution authorizing negotiations on a development agreement.

The preliminary plan is bold. It divvies up the 33,100-square-foot structure roughly as follows:

• 12,200 square feet on the ground level as a type of event/banquet space dubbed The Cornell
•  It would adjoin the 3,232-square-foot Alchemy lounge, located in the northwest corner – a craft cocktail bar – and a food and beverage tenant occupying 1,630 square feet. A craft distillery or coffee roaster are two ideas broached by Landmark.
• The Annex occupies a protruding finger of the building jutting out to the south. Landmark partner David Pape said this 2,600-square-foot space could host everything from indoor farmer’s markets to intimate concerts.
• The Lofts of Cornell – a 5,000-square-foot boutique hotel for travelers or business people traveling through Huntley – is envisioned for the upper level.
• This level also would host a 3,300-square-foot flexible, co-working space with meeting rooms, as well as the corporate headquarters of the Mason Contractors of America trade association.
Burns said the benefits are many, not the least of which is to preserve and repurpose a historic building.

“Frankly, they don’t make buildings like this anymore. It’s always best to preserve them,” Burns said. “We like historic areas. Three of the four [Emmett’s breweries] are located in buildings that are as old or older.”

Burns said he anticipates the project will generate about $90,000 a year in property taxes – not to mention ancillary taxes and fees paid to the village. Plus, the proximity of short-term lodging and the addition of 8,000 square feet of new office space should help invigorate the downtown economy.

The plan comes on the heels of two important precursors. A major component of the village’s Downtown Revitalization Plan is the redevelopment of properties. In 2017 the Village purchased the Catty property at 11117 South Church St. with that intension.

This project also ties in nicely with the passenger rail project to bring Amtrak service to the village. This $275 million project, included in state’s Rebuild Illinois Capital Plan approved earlier this year, includes Huntley and Belvidere as stops on this new line establishing rail service between Chicago and Rockford. The hope is that Metra may piggyback daily commuter service on this, the former Black Hawk line.

“Our intent is to tie it all together,” Johnson said. “We would love to be able to incorporate a station within [the] Catty [plan]. We’re excited about it – if we can get comfortable with where the numbers end up.”

Johnson said some measure of financial support and/or concessions by the village undoubtedly will be required in order to make this estimated $10 million to $11 million project a reality.
“We have a legitimate partner,” he said, “but we have a long way to go.”

We’ve traveled a long distance since the first insurance firm was founded in 1850. Franklin Health Assurance Co. of Massachusetts insured folks against a rising tide of steamboat and railroad accidents.

Hospital and medical expense insurance wasn’t introduced until the 1920s, when a few hospitals began offering services to individuals on a pre-paid basis. That led to the development of the Blue Cross insurance system a decade later.

Now, it seems, that is all we are left with … once again.

Because of factors far too numerous to name, those of us left to fend for insurance on our own, have been confronted with a stark reality. The framework that was supposed to offer choices and competitive rates, has instead limited our options to a single company: Blue Cross Blue Shield of Illinois.

While it is true Cigna, Ambetter and HealthAlliance also offer plans in Illinois, none of those plans are available in McHenry County.

Suzanne Hoban, executive director of the Family Health Partnership Clinic in Crystal Lake, likened the Affordable Care Act to a three-legged stool – missing two of its legs. The federal subsidies, designed as part of the law to limit the risks insurance companies might bear, have evaporated.

The second leg cleaved from the stool was the elimination of the individual mandate. Faced with rising premiums, the young and healthy left the marketplace. That left a shrinking pool of older people and/or those with pre-existing health issues.

Clearly, the system is not sustainable.

“More and more health networks are merging so that we could be left with five to seven health care agencies in the state,” Hoban said. “More people are ending up in the emergency room, causing hospital prices to go up and the cost to shift on insured people.”

“… We’re back to the same cycle we were in eight years ago. It’s not pretty,” Hoban said. “We’re not just slipping back. We’re tumbling back. The cost is going up, the networks are getting smaller and the out of pocket expenses are getting higher.”

The McHenry County Historical Society is hosting its trademark Christmas holiday display through Jan. 3 at the county historical museum, 6422 Main St. in Union. This year marks the 50th anniversary of the Rankin/Bass cartoon “Frosty the Snowman,” as well as the fourth annual “Rock Around the Quilted Tree” quilt display. Hours are 1 to 4 p.m. Tuesday through Friday and on Saturday, Dec. 21. For details, visit www.gothistory.org.