History Advocates in Cary get "taken to school"

Home » History Advocates in Cary get "taken to school" 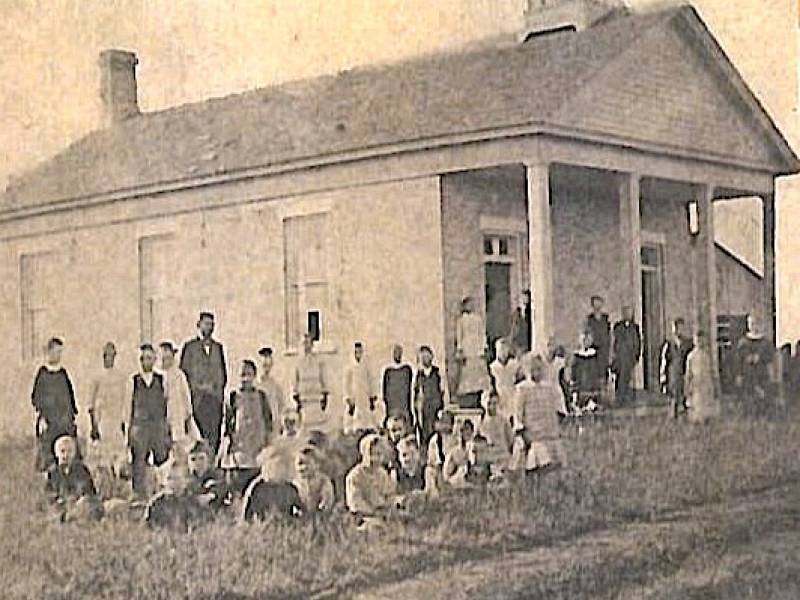 History Advocates in Cary get "taken to school"

The demolition of a historic, one-room schoolhouse in Cary has left Cary-Grove Historical Society President Pam Losey feeling like she’s just been broadsided.

“They sneakily did away with the schoolhouse. … No one called,” she said. “Some lady crashed her car into the mortuary, so they decided to take both that building and [the] original 1861 school down.”

Gone are all the fundraising bricks she sold, the plaque from 1861, a school desk and the original bell – retrieved from Arizona, reinstalled in the bell tower and subsequently transported to the Rawson Bridge Road office of Windridge Memorial Park.

In honor of Cary’s 100th birthday in 1993, American Family Funeral Services – which bought Flagg & Son Cary-Grove Chapel in December 1986 – rededicated the original bell. Now it and all of the original architectural details no longer are available for the public to view and appreciate.

It seems the “Historic Downtown Cary” brochure will require some updating.

“They don’t understand history,” said Losey, whose organization met in the former school for about 15 years. She had hoped to one day house the society’s collection in the building, rather than have it mothballed in storage.

Windridge is a subsidiary of Pennsylvania-based StoneMor Partners L.P. The company’s May financial report showed first-quarter revenues of $71.5 million, compared with $77.9 million in the prior year period. Joe Redling, StoneMor’s president and CEO, stated in the report that it would implement “at least $25 million in cost reductions by the end of 2019.”

Perhaps that was the company’s motive for tearing down the school-turned-funeral-home Feb. 11. The vacant, quarter-acre lot at 104 High St., zoned for business, is on the market for $100,000.

Built for $551, the 40-foot-by-24-foot structure accommodated students from 1861 to 1888, when a larger school opened on Main Street. The Cary United Methodist Church got its start there, replacing the school belfry with a steeple and enclosing the portico and Greek Revival columns in front. The congregation built an addition on the south side of the building for Sunday school in 1900, and it remained there until 1952, when a new church was completed. It became a funeral home in 1986, and the owner, William Trankle, set about restoring the building back to its original condition.
•••
By this time, the Crystal Lake Barnes & Noble bookstore will be history.

Fixtures were sold and inventory moved back to a warehouse. The 19,000-square-foot building in Bohl Farm Marketplace is being leased to a Binny’s Beverage Depot.

Don’t get me wrong. I like Binney’s. It’s the uncertainty of changing from literature to liquor that folks are struggling with – particularly since Elliott Advisors purchased the national bookstore chain. The hedge fund also owns Waterstones bookstores.

CEO James Daunt’s plan for turning the page, and the chain’s fortunes, hinges on acting more like independent bookstores – you know, such as Read Between the Lynes in Woodstock.

“A good independent bookshop is something pretty special,” Daunt told the online business publication Quartz. “It has personality and character, and that’s primarily driven by the people working in it, the booksellers.”

Its ironic how far we have to go to get back to where we’ve been.
•••
The newspaper headline from 1922 noted that “New business springs up along routes taken by autoists.”

The article states: “Automobile tourists may be divided into three classes – one touring from town to town stopping at the best hotel they can find, paying the price and enjoying the accommodation provided. (Think Pritzker.) Another class stops, for the most part, at the private house along the road which put out a sign announcing that meals and lodgings are available within (Think B&B).Then there is the third class, which is the real tin-can tourist, who has a tent, some sort of portable stove, folding beds, etc., and all these camp out overnight, go the nearest grocery store for victuals and do their own cooking. (Think “glamping” … minus the glamour.)

Whatever path they find, tourists continue to find their way to McHenry County. Tourism spending increased by 3.6% in McHenry County in 2018, compared with the prior year. It attracted $256.33 million in local spending and helped contribute to record economic growth in the state, tourism officials said. By way of comparison, local travel spending here in 2012 was $212.8 million and in 2009 it was $178.6 million.

State and local tax revenue generated from visitor spending jumped 7.1% to $3.3 billion, creating an additional $220.8 million for the state, as well as local communities. According to Visit McHenry County, local tax revenues climbed slightly more than 2% to $8.32 million.

The annual conference of the Illinois State Genealogical Society, “Connecting the Dots,” will be Oct. 25 and 26 at the Chicago Marriott in Naperville. Nine expert genealogists will present more than 20 sessions. The forum will be presented for local genealogical societies Oct. 26. There also will be two workshops presented by Paul Woodbury on Oct. 25. Workshops are limited to 30 participants each. For information or to register ($85 members, $95 nonmembers), visit www.ilgensoc.org/cpage.php?pt=546.

Learn about the largely unknown link between better roads and voting rights at 7 p.m. Aug. 19 at the county history museum, 6422 Main St. in Union. Kay Shelton Kozak, president of the Lincoln Highway Association, will present “The Women’s Suffrage Movement and the Good Roads Movement in Illinois.” The McHenry County Historical Society’s annual meeting precedes it at 6:30 p.m. For details, visit www.gothistory.org.