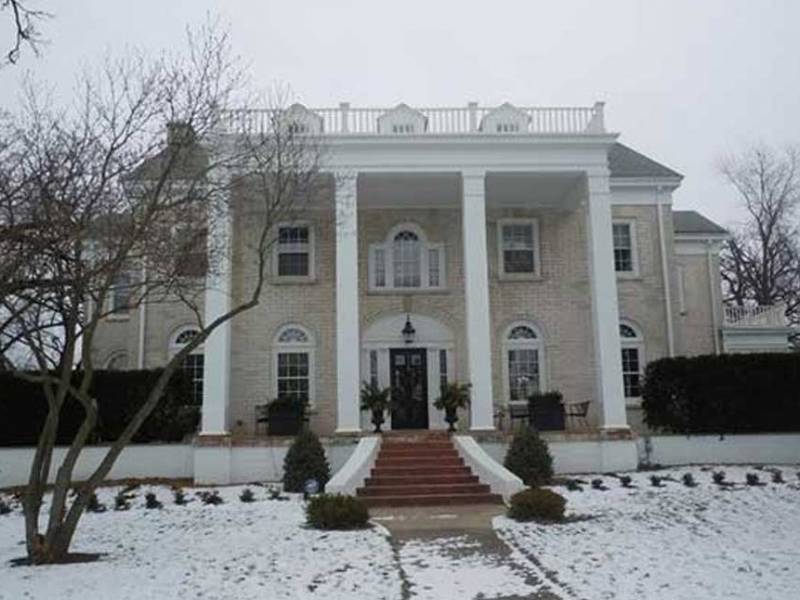 The McHenry County Historical Society’s Historic Sites Committee presented a plaque at the Josephine and William Lorimer Jr. House at 1 p.m. Saturday, May 18, 2013 at 615 Lake Ave. in Crystal Lake. The present owners, Rudolph Magnani and Lynn Lourie, have taken the utmost care in preserving and restoring this 1929 grand residence and will be awarded the plaque in a public ceremony.

The year was 1929. The downtown sign, electrified with 80 light bulbs above the recently paved Williams Street, proclaimed: “Crystal Lake, A Good Place to Live.” It also stated “55 minutes to Chicago.” Life was good and everything seemed to be feasible through modern technology. Radio, telephones, and moving pictures with sound, were bringing 'modernity' to the most remote parts of our population. Mickey Mouse spoke for the first time (“hot dog!”) and a color, talking movie debuted – all available at the Crystal Lake’s new El Tovar Theatre. Jazz and dancing rose in popularity, and Europe’s art deco movement was influencing not only art, but American architecture as well.

Across the border the Canadians proclaimed woman to be “persons,” and just 55 minutes away, the St. Valentine's Day Massacre shocked the nation. The excessive Roaring Twenties were coming to a close, and with it, Wall Street’s crash. In France they proclaimed the era "années folles" ("Crazy Years"). While clouds were rolling over this golden time, American’s discovered a board game called, The Landlord's Game, later known as Monopoly.

During this time, a Chicago businessman, William Lorimer Jr., was doing rather well in the timber Industry. His business required him to make frequent business trips south and he was often accompanied by his wife, Josephine. The South’s pre-Civil War architecture greatly inspired Josephine and she dreamed of building such an estate up North. Eventually the Lorimer’s bought several acres just across the street from Crystal Lake’s, Main Beach, bordered by Lake Avenue, Country Club and Ringling Roads.

By 1928 they hired a local builder, W. Frank Robbin, who claimed the “W” stood for “willing.” Unaware of the hard financial times ahead, Josephine and Mr. Robbin broke ground to create a bit of Natchez, Miss. in Crystal Lake: The Lorimer mansion.

Completed in 1929 this 5,000-square-foot plus Federal Revival home, with its truly magnificent white portico, centrally located Palladian window, and unique white glazed brick Duntile walls, often was referred to as the “White House.” Upon entering this home one is greeting by a two-story foyer and rather grand open staircase with original balustrade. To the right the foyer opens up to a formal dining room with adjoining kitchen, sitting room and simple back staircase. To the left a large formal living room and adjoining music room awaits you. These formal areas all retain their original bold black and white checkerboard terrazzo flooring and arched windows with segmental pediments. Midway up the stairs a large landing and the exquisite Palladian window with three Gothic arches in the pediment provides a panoramic view of Crystal Lake.

The second level, with its original hardwood floors, houses the master and guest bedrooms, and baths. The silver door hardware, plaster work and trim details, reflect a touch of an art-deco inspiration. A separate simple staircase in the back services all floors, including the kitchen, garage, and basement.

It is here, in the basement, one can find the origin of the unique white bricks used to build this home. The Duntile logo can be seen on several of the exposed basement bricks. These special bricks were locally produced from 1928 to 1936 at the site of the old Oak Industries building on the southeast corner of Main Street and Crystal Lake Avenue. The Lorimer home was a perfect fit for William, Josephine and their six children.

Unfortunately their luxurious White-House lifestyle was short-lived. The Depression took its toll on their business and by 1930 they were forced to leave Josephine’s Natchez mansion. William Lorimer died in 1934 at age 74, under a cloud of suspicion. Following his appointment as a U.S. Senator – from June 18, 1909, until July 13, 1912 – the Senate adopted a resolution declaring “that corrupt methods and practices were employed in his election, and that the election, therefore, was invalid.”

Lorimer, nicknamed the “blond boss” in Chicago, was the last senator to be deprived of office for corrupting a state legislature. In May 1913 the 17th Amendment providing for direct election of U.S. senators became part of the U.S. Constitution. Lorimer served as president of the La Salle Street Trust & Savings Bank after leaving political office. Through the years several families came and went and sadly the home was divided into a rather neglected duplex.

Today, thanks to the talent and dedicated restoration efforts of Rudy and Lynn, the Lorimer Home can once again proudly hold the “White House” title. Winston Churchill said “First we shape our buildings; thereafter they shape us." This is very true, but unfortunately few of us in McHenry County know the historical background of the buildings that surround and shape us, such as the Lorimer residence. Your McHenry County Historical Society is working to change that. We invite people with architectural and/or historically significant buildings, homes, businesses, farms, to apply for a plaque. Contact us at at 815-023-2267 info@mchenrycountyhistory.org.