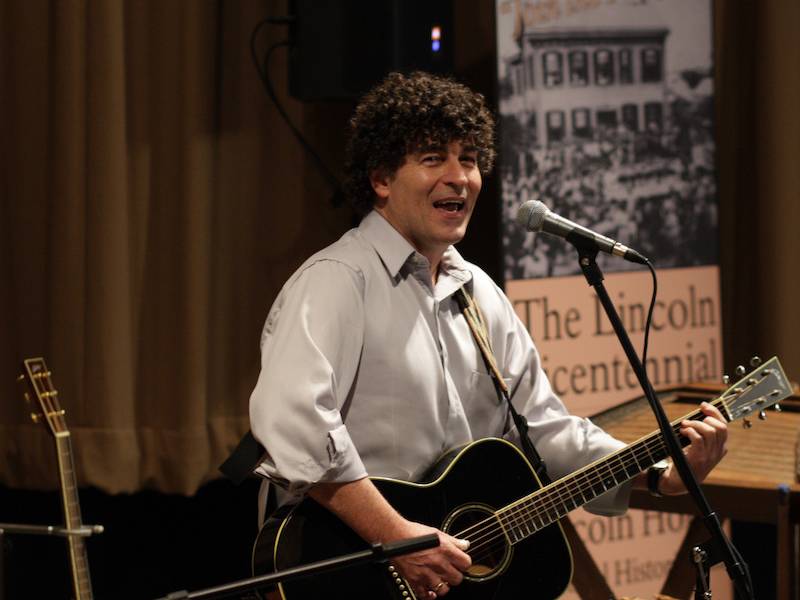 UNION – Chris Vallillo, a musician and historian from downstate Macomb, hopes who attend Monday’s free presentation by the McHenry County Historical Society leave with added admiration for music’s power to inspire and heal.

“I want people to walk away with an appreciation for the music of people’s lives and a renewed appreciation of how it applies to us today,” Vallillo said. “It’s the glue that binds us all together.”
Made possible by a grant from Illinois Humanities, “Historic Instruments of Illinois” will be presented virtually at 7 p.m. Monday, April 5. Attendees must register in advance on the MCHS website at www.gothistory.org to receive the access code.

“I’ve learned that Illinois was an incredibly cosmopolitan state, a real melting pot,” Vallillo said. “You had songs that were published professionally and a year later they were taught in a one-room school.”

And at the hub of this multi-spoked wheel sat Chicago; bolstered by a burgeoning immigrant population skilled in instrument-making, a transportation network that was second to none and mail-order distribution network featuring the likes of Montgomery Wards and Sears, Roebuck and Co.

From homemade dulcimers and fiddles to mass produced guitars, banjoes, mandolins and pianos, Chicago became a national center for musical instrument manufacturing, sales and distribution following the Great Fire of 1871. It included popular brands such as Lyon and Healey, Washburn, Regal, Kay and Harmony, as well as a number of small, influential shops such as the Larson Brothers.

Still, many of those pre-war guitars were too expensive for a self-taught musician just getting by.
“I’ve always had a soft spot in my heart for fixing things, so I’d buy broken guitars and fix them. In the early 2000s I bought Washburn Model 145, made with Brazilian rosewood, that was busted into pieces. I spent 10 years restoring that guitar and now I play it in this show. …

“When the internet started happening, I’d join instrument repair forums. I’d read books. I’d experiment on cheap guitars first, until I learned,” Vallillo said. “I’m not talented [in this] but I’m stubborn.”
He now has an estimated 100 antique stringed instruments in his collection (half of which have been restored), including a 1936 Dobro slide guitar. His 2013 release, “ The Last Day of Winter,” featured 16 vintage instruments from his collection.

Vallilllo studied archeology, finishing his degree at Beloit College, before serving as a staff archeologist at Western Illinois University for three years. But when opportunities dried up, he pursued his true passion: music.
“My goal was to try it for a year,” he said. “I didn’t want to be rich or famous. I just wanted to make a living.”
Fortunately, reality met expectations.

In 1986, the Illinois Arts Council launched the Schuyler Art Folk Music Project for which Vallillo documented the last of the pre-radio musicians in rural Illinois. The result, some 30 interviews and audio recordings, was accepted into the American Folklife Collection at the Library of Congress.

“Most of these people were in their 80s and 90s,” he said. “It was a very delicate process of getting them to open up. Sometimes they’d let me do a recording, sometimes they wouldn’t. It was wonderful sitting with these living encyclopedias of knowledge, people who had these incredible life experiences. …What they showed me and taught me was the relationships they had with music and how it worked.”

At the turn of the century, there was no recorded music. It was more of an oral tradition handed down by self-taught musicians and instrument makers. “In 1880, if there was music it was because someone was standing there with an instrument making it,” Vallillo said.

Vallillo, 66, has made plenty of music over the years. While hosting and co-producing the nationally syndicated public radio performance series “Rural Route 3,” he performed with the likes of Allison Krause and John Hartford. The show, which aired seven year on National Public Radio, received the National Federation of Community Broadcaster's Bronze Reel Award for a national music/entertainment series.

His 2016 project, “Oh Freedom! Songs of the Civil Rights Movement” climbed to No. 6 on the national folk charts. And his one-man show, “Abraham Lincoln in Song,” received the endorsement of the Abraham Lincoln Bicentennial Commission and reached No.10 on Billboard’s bluegrass chart.

The last in the four-part Sampler Lecture Series takes place at 7 p.m. Monday, April 19. Presented by Erika Holst, curator of history at the Illinois State Museum, “The Life Cycle of Clothing in the 19th Century” explores the life cycle of clothing during the 1800s: How it was created, mended, remade, washed, and ultimately recycled.