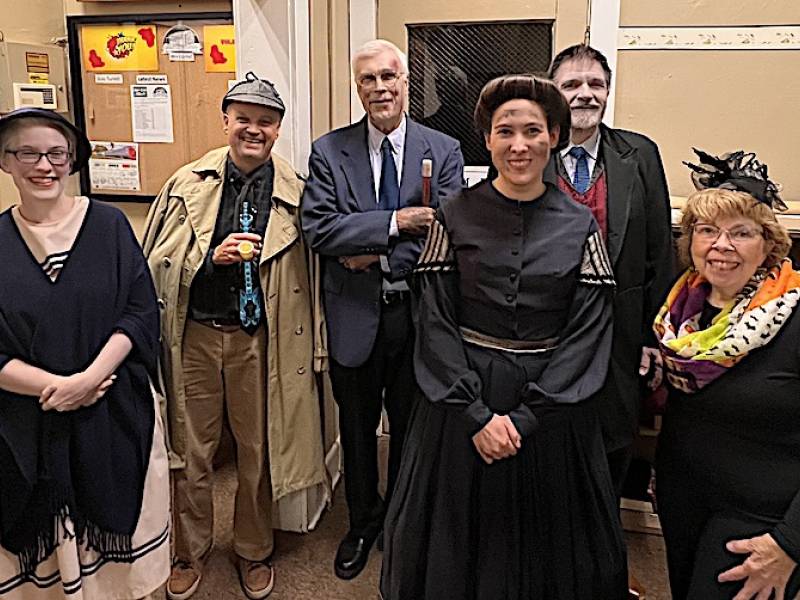 Some 100 brave souls on Oct. 26 heard the real-life, macabre stories of how four individuals tragically lost their lives in McHenry County. This year's offerings included the horrific death of a Harvard couple in the I903 Iroquois Theater fire, the aftermath of a dead man found floating in Crystal Lake, the unsuccesful investigation to identify the remains of a dismembered woman buried in a wooded area outside Crystal Lake and the strage circumstances surrounding a 1958 fatal train accident between Crystal Lake and Cary,

Commuter train No. 514, the Rochester Special originating in Minneapolis, was struck by train 644 from Williams Bay, Wis. It is thought to have made the turn on the wye at East. Crystal Lake Avenue at about 7:14 a.m. before it plowed into the No. 514.

Frank Fillipelli, 32, of Green Bay, Wis. a flagman on the Rochester streamliner, was believed to have been standing on the rear platform or just inside the rear door when the impact occurred. His body was so crushed in the wreckage it could not be removed until the debris was pried apart 10 hours later.

Six others were injured and many more were seriously hurt. They suffered broken teeth, facial cuts, broken legs and other less critical injuries from being thrown down the aisles or against seats

Earlier in the evening Mrs. Grace B. Levine, 61, a Crystal Lake native and resident of the Royal Oaks Trailer Park was struck by a train at Consumers Road - behind the American Expansion Bolt & Mfg. Co. building. She drove up to the tracks but unable to see because of the fog, she got out to make sure there was no trains coming. The train eastbound at 6:26 a.m. but running two minutes late, rushed out of the fog and struck her as she stood in the middle of the tracks – hurtling her body about 100 feet. The Crystal Lake Herald reported: “When investigators found her car the engine was still running."

Deputy Sheriff Edward Dowd said he was standing at the site of the Levine fatality when he heard something that sounded like “the detonation of a track torpedo and then the crash of the locomotive as it telescoped the back fo the coach of the Rochester Special three quarters of a mile further east.”

Dowd said the impact “seemed to shake the countryside like an explosion.”