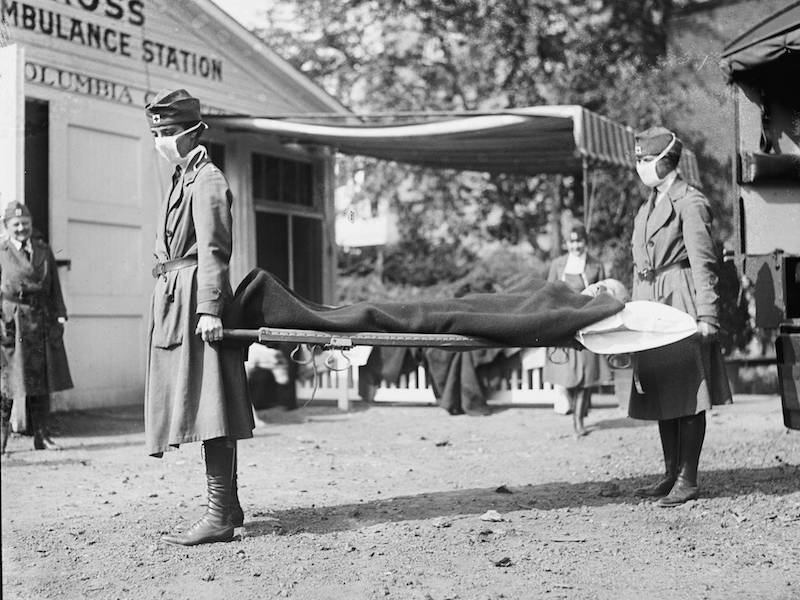 
During these unprecedented times, it is worth remembering that the world went through something just as deadly in 1918 – perhaps even more so considering the double whammy of World War I-related injuries and prevalence of tuberculosis.

“The Spanish influenza is said to be beginning a visit to this country. Most things Spanish are not to be sneezed at, but the influenza is an exception.”

Soon after, newspapers were full of reports of illness and death in every corner of McHenry County – alongside ads for “miraculous” cure such as “Knock-A-Kold.” To combat this growing threat, the United States Public Health Service issued a bulletin in September 2018 outlining precautionary steps and what to do if you or a loved one became ill.

“So far as a disease like influenza is concerned health authorities everywhere recognize the very close relation between its spread and overcrowded homes. … The value of fresh air through open windows cannot be over emphasized. Where crowding is unavoidable, as in street cars, care should be taken to keep the face so turned as not to inhale directly the air breathed out by another person. It is especially important to beware of the person who coughs or sneezes without covering his mouth and nose.

“It also follows that one should keep out of crowds and stuffy places as much as possible, keep homes, offices, and workshops well aired, spend some time out of doors each day, walk to work if at all practicable - in short make every possible effort to breathe as much, pure air as possible.”

Following widespread influenza outbreak in 2017-18, I wrote in February 2018:

“During the Spanish flu of 1918, a shortage of physicians and nurses because of World War I left inexperienced medical students to pick up the pieces. Also, the scope of the problem quickly outstripped hospital capacity. More than 25 percent of the U.S. population became sick, meaning schools – even private homes – were pressed into service as makeshift hospitals.

“Equally impactful was its effect on society. People were encouraged to avoid public places such as theaters and sporting events. Businesses, their employees sick or quarantined at home, were forced to close.”

“It is now believed that influenza is always spread from person to person, the germs being carried with the air along with the very small droplets of mucus, expelled by coughing or sneezing, forceful talking, and the like by one who already has the germs of the disease. They may also be carried about in the air in the form of dust coming from dried mucus, from coughing and sneezing, or from careless people who spit on the floor and on the sidewalk.

“As in most other catching diseases, a person has only a mild attack of the disease himself may give a very severe attack to others. What should be done by those who catch the disease? It is very important that every person who becomes sick with influenza should go home at once and go to bed. This will help keep I away dangerous complications and will, at the same time, keep the patient from scattering the disease far and wide.”

So here we are, working from home and insolated – for our own good – from family and friends. But rather than grouse about our lot, I’d save your recriminations for government officials who failed to stockpile adequate medical supplies and hospital beds for a time health experts long predicted could strike at a moment’s notice.

A 2007 article for the National Institutes of Health stated: “Influenza pandemics have occurred regularly every 30 to 40 years since the 16th century. Today, influenza experts consider the possibility of another influenza pandemic, not in terms of if but when.”

Should we have seen the COVID-19, or its likeness, coming? Unquestionably.

In a column two years ago, I wrote: “Unlike 1918, when a flu pandemic swept across the globe, infecting a half-million people and leaving an estimated 20 million to 50 million victims in its wake, doctors know the microscopic killer is not a type of bacteria, and they how to curtail its spread – provided that experts divine the right preventive cocktail before next flu season.”

Stay safe out there folks and do your best to use this time productively.

Peruse our free digital newspaper collection at www.gothistory.org. With the assistance of the McHenry, Marengo-Union, Nippersink and Woodstock libraries, as well as the county genealogical society and community organizations, MCHS orchestrated the digitization of the Richmond Gazette/Nu Vue News from 1880 through mid-1985, the McHenry Star from 1988-1998, McHenry Plaindealer from 1875-1923 and the Marengo Journal, News, Republican and Republican-News newspapers from 1856 -1923. The latest addition are issues of the Woodstock Sentinel, American and Republican from Sept. 8, 1916-July 13, 1923. The latter was made possible thanks to a $5,000 grant from the Reaching Across Illinois Library System (RAILS).

All of these papers are searchable, plus text can be “clipped” digitally and saved. If an organization you belong to would like donate money to help move this important project forward, contact me.

While you are holed up at home, consider putting down that smartphone and have a conversation. Share family stories and – this is important: write them down for the next generation … and for the historical society’s research library. Did you know we keep family biographical files, which Society members can access for free? For library use guidelines visit GotHistory.org.

Also review old photo albums and write down the names, dates and locations in the photographs. Then pick up that smartphone and finally download important images you wish to preserve. Make sure to include names and dates. Without that information they are worthless.

Finally, we encourage you to share your stories during this unprecedented pandemic. These personal accounts – be they letters, journal entries, drawings or photographs – will become part of a unique archive chronicling this time in our county. Send them to the McHenry County Historical Society at P.O. Box 434 Union, IL 60180. Include your name and contact information in case we have any questions.

A March 19 letter to the Trump administration from National Retail Federation President Matthew Shay seeks mitigate the line between the haves and have-nots by clarifying guidelines on what constitutes an essential business.

“There remains a need for clear national guidance to resolve questions caused by a number of conflicting state and local orders that are triggering consumer, worker and business confusion, leading to cascading negative impacts on communities across the country,” Slay wrote. “Our members report that towns, cities and counties are deviating from instructions offered by governors and state agencies.”

By way of an example, the NRF notes that some localities have determined that “pet stores, which provide pet food and medicines are not ‘essential’ despite the millions of pet owners who rightfully need specialty supplies for their pet’s wellbeing.”

Slay goes on to note that: “Several jurisdictions have overlooked the important role distribution centers and transportation logistic companies play in the retail industry. Retailers, grocers and restaurants cannot resupply without access to their distribution centers.

“When state and local governments give blanket orders to “close non-essential retail” and “limit mass gatherings to 50 people,” it causes panic and alarm. Consumers then swarm retailers, which exhausts existing supplies and overwhelms employees.”

To avoid shortages the NRF and Retail Industry Leaders Association are advising consumers to shop responsibly during the coronavirus pandemic.

“If you don’t need an item in the next two weeks, leave it for someone who does. Hoarding and stockpiling creates unnecessary gaps between the time that someone who truly needs a product can find it back on retailers’ shelves. This is particularly important for our most vulnerable neighbors – the elderly and those who are struggling with other health issues,” the press release stated. “Hoarding products only contributes to the fear surrounding the virus, and any hoarder acting with malicious intent to drive up prices on a secondary market should be prosecuted to the fullest extent of the law.”

On a Lighter Note

The latest crackpot idea to replace Chief Illiniwek as the University of Illinois’ symbol is a female belted kingfisher. Is this to commemorate women’s suffrage and 19th Amendment? No.

Female kingfishes just happen to be orange and blue.

I’ll tell you who’s blue: alumni. For the love of “Gitche Manitou,” just bring back The Chief. Please. Forget the white underclassman with war paint dressed up in buckskins. Shelve the halftime dance out of respect for Native Americans, but return the only symbol U of I grads are prepared to support.

The 2018 suggestion of “Alma Otter” met a well-deserved inglorious end. Now the belted kingfisher is perched on the edge of oblivion. Alumni do not care that it beats its prey against rocks. Even pelicans are more menacing.

Nevertheless the Illinois Student Government put the kingfisher idea to an advisory vote. After the 7,800 ballots were counted, it passed by a margin of 625. Seriously.

Washington, the nation’s capital, has a professional football team named the “Redskins” and at Florida State University a student dresses up as a Seminole warrior and thrusts burning spears into turf. People are worried about this?

Published April 8, 2020, in the Northwest Herald