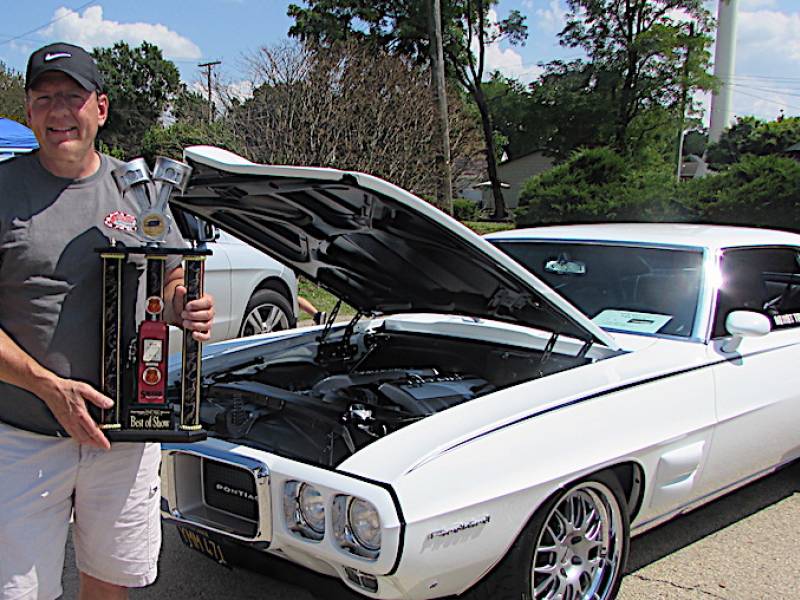 Thomson said he has been building hot rods out of the garage since he was 15 years old. His attention turned to high-performance boats and motorcycles for awhile, before returning to cars.

Thomson, an industrial engineer and salesman at General Kinematics Corp. in Crystal Lake, bought the "black plate" Firebird in California and set about rebuilding it from the ground up. Following four years of restoration, it hit the show circuit two years ago.

It now boasts a custom 650-horsepower engine, new paint job and  a myriad of other improvements that make it perfect for "parking lot autocrossing."

"It's basically a hobby and a challenge – to build something from the ground up and make decisions on every nut and bolt. You are basically  marrying a modern drive train onto an old body. ... The cost of building something like this is extremely high but you can save yourself a bunch of money because it's your own labor."

Doerge bought the mint, cream-colored 1949 Buick Super Convertible about a year ago – about the time he retired from the Buick dealership he owned in Glenview. All told, he’s been a car collector for 40 years.

Through a national Buick club, Doerge tracked down the rare car in Bemidgi, Minn. It had sat in a garage for years and had just 254 miles on it. Following restoration – which included brakes, a gas tank and a new paint job – it was back on the road … at least every once in awhile.

“Union is a great show,” Doerge said. “I attend every year.”

The other top 20 vehicles, as selected by show participants, were: