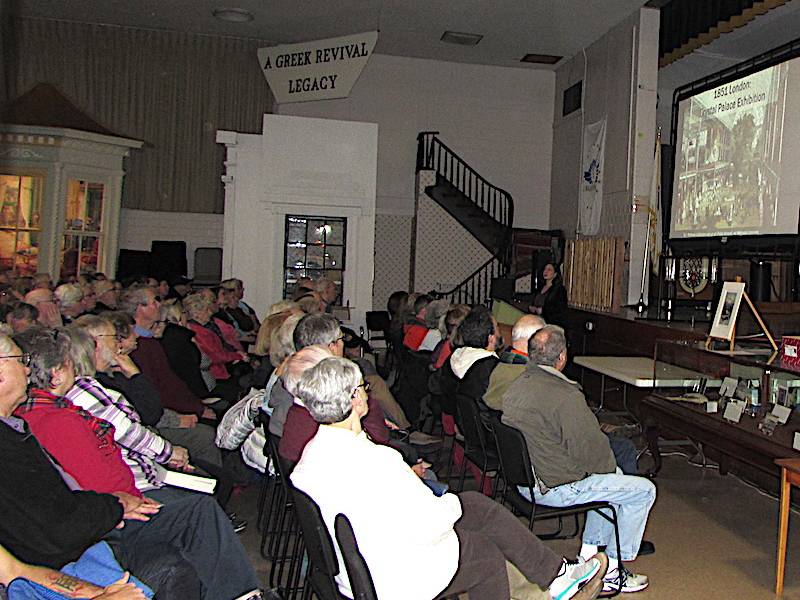 About 135 people attended the March 11 opening of this year's Sampler Lecture Series at the McHenry County Historical Musuem in Union, presented by Rebecca Graff, assistant professor of anthropology and chair of the American studies at Lake Forest College.

Between May 1 and Oct. 31, 1893, an estimated 27 million people visited the Columbia Exposition – nearly a quarter of nation’s population at the time. Chicago dedicated more than 600 acres, in and around Jackson Park, for the occasion: honoring the 400th anniversary of Columbus’ discovery of the New World. Nearly 200 buildings – many gleaming white under awe-inspiring electric lighting at night, wound alongside canals and lagoons.

“Among the Chicago Park District’s many monuments is  “The Republic,” located in Jackson Park,” wrote Virginia M. Meyer in the spring 1985 edition of the Chicago Genealogist. “The Republic” is a statue replicate of stone which stood in the Court of Honor at the World’s Columbian Exposition in 1893. The gilded statue of Columbus was 60 feet in height and covered with gold leaf, a beautiful and artistic contrast to the classic white of the buildings and the blue of the water of the lagoons.”

What buildings were not sold off or moved, simply were demolished and buried on site. Graff and her team conducted two exploratory digs on the site in 2007 and 2008. She talked about her findings and the future of this archeological site – location for the new Obama Presidential Center. It is slated to be built on what was the fair's horticultural building and the massive Transportation Building – a palacial Romanesque structure erected by Adler & Sullivan, architects of the Auditorium and the Schiller Theatre in Chicago,

It is the first of four programs offered as part of the 33rd Annual Sampler Lecture Series. Admission is $10. Series tickets are $35, $30 for county historical society members.

“I just like old things,” Graff said. “If you wanted to do archeology, you had to be an anthropologist. It’s the people aspect. … Women, people of color, working class people, those who were illiterate and immigrants; they did not have their mundane experiences captured. What you have instead are the material traces of their lives.”

Graff and her team conducted about 150 “shovel probes” about 27 inches deep all around the park. At times, she said, the plaster facades and column fragments.

“It was amazing. It felt like we were in ancient Rome,” said Graff, whose book – “The Vanishing City and the Enduring Home: Approaching Modernity at Chicago’s 1893 World’s Columbian Exposition and the Charnley House” – is due out later this year.

Her past excavation in Jackson Park uncovered a robust sanitary infrastructure beneath the fair, portions of the Woman’s Building and delicate plaster remains of the Ohio State Building – which the New York Times claimed was thrown into Lake Michigan. They also uncovered traces of the Woman's Building, which sat the entrance to the midway, artifacts that ranged from shards of pottery to glass containers, carbons for arc lights, fragments of bone toothbrushes with boar's hair bristles, and a glass cruet that was part of a condiment set.

"I'm interested in things that have been there for awhile," Graff told the audience.

She noted there were 30 different restaurants at the world's fair and a wide array of inventors and fledgling businessmen looking to attract attention to their products. The lineup included the Galt Artificial Limb Co. of Woodstock, Ill.

“Once we found the [Ohio] building, we assumed everyone would be super interested in the park,” said Graff, who is hoping the Historic Preservation Act and a lawsuit by Protect Our Parks buys time for further archeological investigation before contractors decimate the site. “You would think that they (developers) would use this [White City legacy] as part of the grand history of this place.”

Graff, a native Californian, speculated she might have a genetic propensity for digging in the dirt. Her great-grandfather, Russian immigrant Morris Graff, toiled as a laborer digging ditches on the original exposition midway.

“I want people to leave [the program] with an understanding of what archeology is,” Graff said. “We create a record of what we find and make sure that knowledge is available for all. … Archeology is a team endeavor and that is why I love it.”

Upcoming lectures in the series include:

• 3 p.m. Thursday, April 25 – McHenry County College history instructor Sarah Sullivan presents Marshall Field’s and Chicago. Learn about the events and personalities that made Marshall Field and Co. Chicago’s store and its founder a titan of retail.

All programs are at the Society museum, 6422 Main St. in Union. The Audubon and Native American programs are made possible through a grant from Illinois Humanities. For information, visit www.gothistory.org or call 815-923-2267.