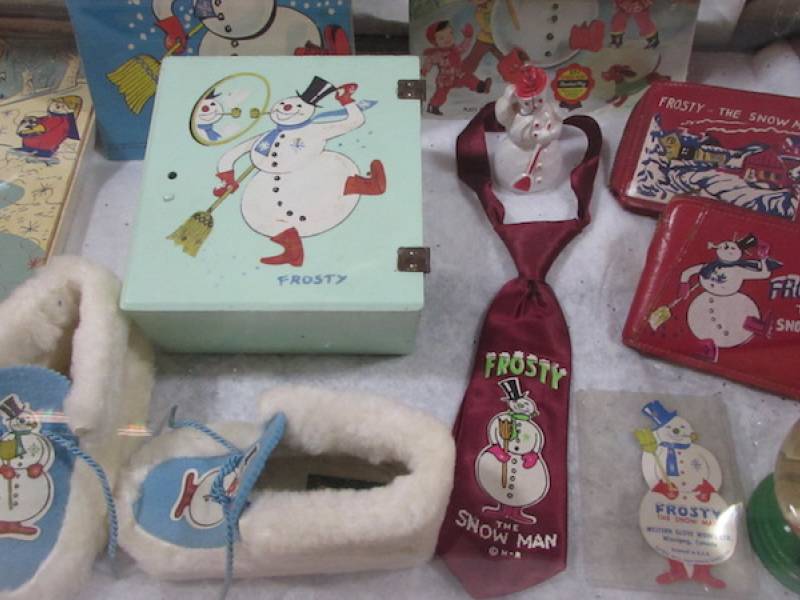 UNION – It first aired on Dec. 7, 1969 – 50 years to the day that the McHenry County Historical Society will mark the occasion honoring Frosty the Snowman.

Dave Harms and Lynne Eltrevoog, historical society and Golden Glow of Christmas Past members from Marengo, have compiled another must-see display of all things Frosty – from slippers to ties to string lights, movies and more – at the museum, 6422 Main St. in Union.

After all, when you’re talking Christmas characters, there are none bigger than Santa, Rudolph and Frosty. There’s magic in that ol’ black hat.

A very different looking Frosty actually appeared in 1950, Harms said – years before the Rankin/Bass makeover featured in the company’s 1969 TV special. He was part of a cast of holiday characters major retailers used as part of their marketing campaigns. Montgomery Wards had Rudolph, Carson Pirie Scott had the Cinnamon Bear and Marshall Field adopted Uncle Mistletoe and Aunt Holly. Frosty promoted merchandise sold at Sears.

Part of their corporate outreach strategy involved luring passersby on the street with “trade stimulators.” These animated props, typically featuring motors or magnets, were placed in store windows as a way of attracting shoppers. They were manufactured by companies like New York-based David Hamberger Holiday Displays and Gregory Motors, Inc. and Harold Gale Co. of Kansas City, Mo.

Dave and Lynne’s repertoire, accumulated mostly in the last 10 years, include a 1951 sleeping Santa, a ballerina bear, an elf assembling a toy and a Santa playing piano. About 20 will be on display on the museum stage.
“I love lights that blink and I love motion,” Harms said. “We’re hoping that when they’re all moving the whimsy of it will produce a smile.”

Among their favorite bits of memorabilia are the Red Raven animated records – featuring a mirrored device that attached to the spindle and brought to life a printed cartoon on the records when they played.

“I’ve been collecting for 40 years and because I’ve been doing it long enough, people will call me and say ‘I saw something you might be interested in.’”

That worldwide network has enabled Harms and Eltrevoog to latch to everything from a wooden Merriplay teeter-totter, to a Teem soda countertop display with Frosty’s likeness, to a rare 1963 Polk Brothers department store Frosty. By happenstance, the latter was found squirreled away in the attic of a Marengo house slated for demolition.

“The discovery and seeking out information is just a ton of fun,” Harms said.