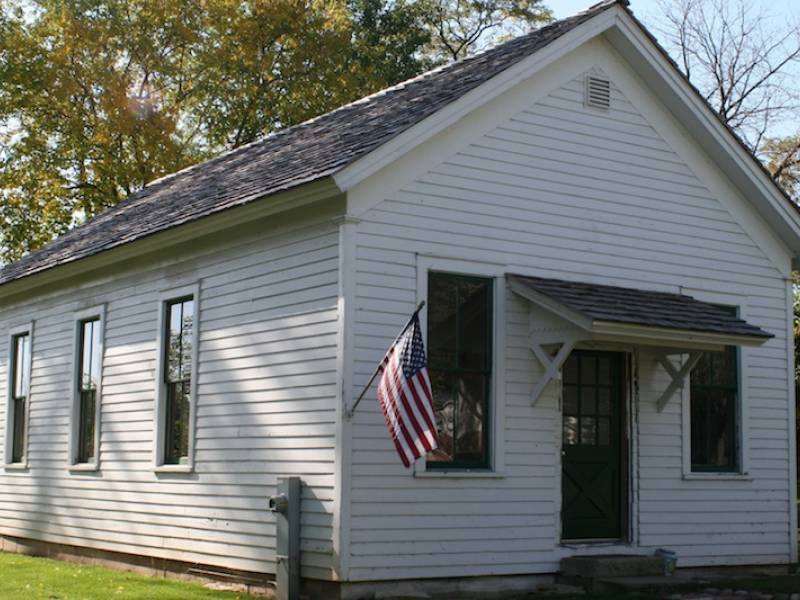 After two years of waiting, a reconstituted McHenry County Historic Preservation Commission and the McHenry County Board plaqued the 1886 Ford School Wednesday, Oct. 23, in Lake in the Hills.

Located on the southeast corner of Lake Drive and Ramble Road, north of Algonquin Road, in Ford School Park, the one-room schoolhouse replaced a log school on the same site. The 20-by-36-foot school closed in 1939 when districts consolidated. The surrounding farmland was sold to a developer and the building was sold for $250 and moved, about 1945, a few blocks west on Algonquin Road. The original school site became a neighborhood park.

After the schoolhouse had been moved to the new site, the building was known to be utilized as housing for migrant labor, later as a private home, and lastly in 1998 for the office of the Stonegate Nursery and Landscaping business (2001 West Algonquin Road, which is now Clarendale of Algonquin residences). An addition was constructed on the right side of the building as seen looking toward the front elevation. Nevertheless, the nursery owner, Mark Ball, took care to retain original features of the building. A great deal of materials original to the structure had been preserved, since, for example, windows, bead board, maple flooring had been left intact or covered over rather than removed.After the nursery closed, the structure remained on the site until June 2012 when it was moved back to the original site in what was now called Ford School Park.

The historic integrity of the schoolhouse is excellent, having been restored by members of the Lake in the Hills Historical Society in accordance with its historical conditions, wrote the McHenry County Planning & Development Department.

The Lake in the Hills Historical Society was able to use land records, actual records saved by school district personnel, pictorial evidence, personal interviews, and other historical documents and articles to piece together and document a very comprehensive history of the school and the architectural features of the structure, including elements of the interior.

“It’s been a lot of fun and it’s the kind of volunteering people like to do,” said Bob Spooner, president of the Lake in the Hills Historical Society.

October's dedication featured a one-room school teacher reeneactment by Karen Parks of Wonder Lake, an overview of the building's history and its restoration by Spooner and a plaque presentation by District 2 County Board member Suzanne Ness.