Fit to be Tied

Home » Fit to be Tied 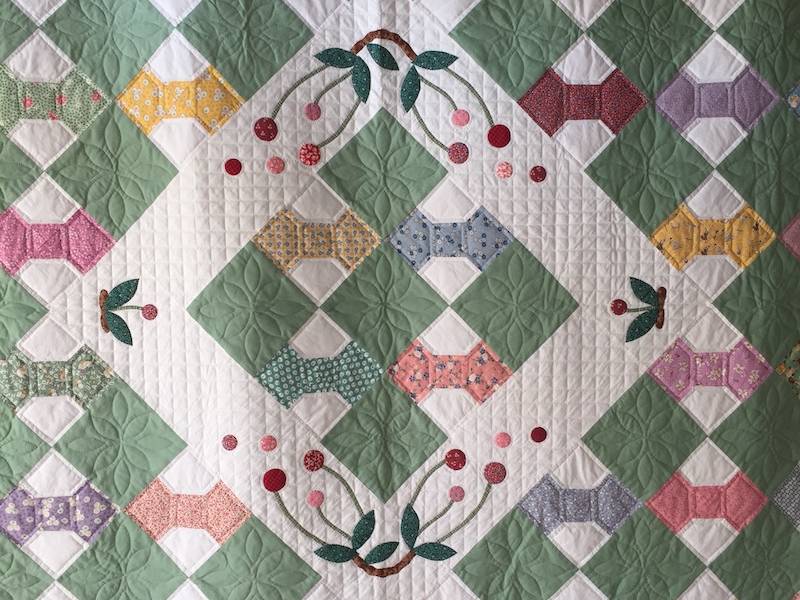 Fit to be Tied

The new quilt for the 2020 raffle is a bow-tie pattern made from 1930s pastel prints. Some of the fabric prints have recognizable figures in them. They are called object or conversation prints. These were used as early as the mid-1880s.Often the early prints were of a patriotic or nautical subject, or a nature theme.

The popularity of conversation prints spread as a new printing process made it economical to print small designs on fabrics. These prints remain popular and now include Disney characters and popular game or movie heroes.

The Heritage Quilters' Bow Tie quilt has a lightness and whimsey to it, with a center block of applique. The bow tie block alternates with a 1930s' green to add interest and color.  The Bow Tie was rarely used by Amish, but some rare examples of their use do exist.

The pattern dates to the 1880s and was first published by the Ladies Arts Company in 1895. Like so many quilt patterns, it had other names: Colonial Bow Tie, Peekhole, True Lovers’ Knot, Dumbbell.

The persistent story of quilt blocks used as code for runaway slaves includes the Bow Tie.  That story tells of signaling runaway slaves to dress up in fine clothes to pass in disguise if stopped.  The ultimate authority of quilt history, Barbara Brackman, states there is no evidence of quilts being used as signals, codes or maps. This story persists, yet has no documentation in quilt history to back it up.

Because of COVID-related programming interruptions the drawing date for this year's raffle quilt, Fit to be Tied, will be announced at a later date. Tickets are $1 each or six for $5.