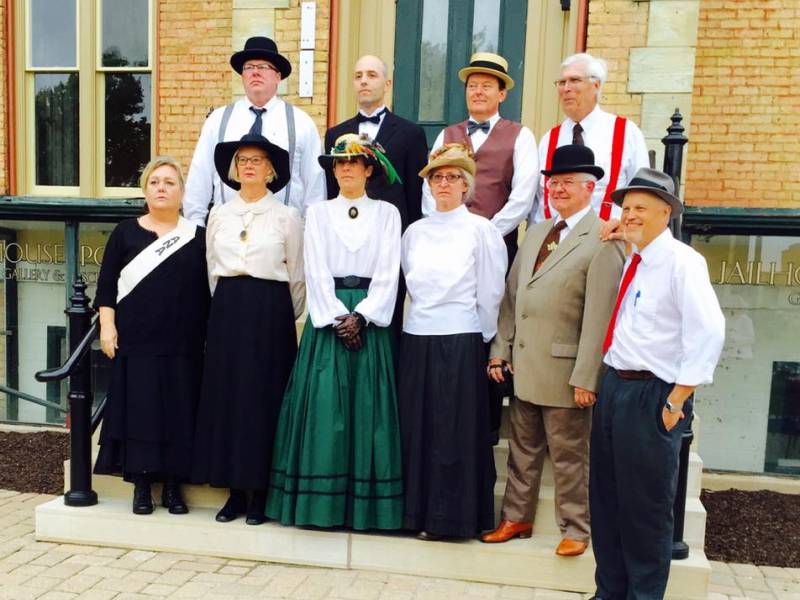 An energetic crowd turned out Thursday, June 16, to witness history: The release of Eugene V. Debs from the McHenry County Jail in Woodstock on Nov. 22, 1895.

A rousing speech by American Railway Union Vice President George Howard (Craig Pfannkuche), set the table for series of emotionally charged debates over labor reforms, women's rights, the division of wealth, peaceful protests and investigative journalism should play in society. Many of these debates continue today.

Debs, by all accounts a remarkable speaker and statesman, offered up these thoughts upon his release:

"The theme tonight is personal liberty; or giving it its full height, depth and breadth, American liberty, something that Americans have been accustomed to eulogize since the foundation of the Republic, and multiplied thousands of them continue in the habit to this day because they do not recognize the truth that in the imprisonment of one man in defiance of all constitutional guarantees, the liberties of all are invaded and placed in peril.

"As Americans, we have boasted of our liberties and continue to boast of them. They were once the nation’s glory, and, if some have vanished, it may be well to remember that a remnant still remains. Out of prison, beyond the limits of Russian injunctions, out of reach of a deputy marshal’s club, above the throttling clutch of corporations and the enslaving power of plutocracy, out of range of the government’s machine guns and knowing the location of judicial traps and deadfalls, Americans may still indulge in the exaltation of liberty, though pursued through every lane and avenue of life by the baying hounds of usurped and unconstitutional power, glad if when night lets down her sable curtains, they are out of prison.

"Standing before you tonight  – clothed, in theory at least, with the prerogatives of a free man, in the midst of free men – what more natural, what more in consonance with the proprieties of the occasion, than to refer to the incarceration of myself and associate officials of the American Railway Union in the county jail at Woodstock?

"I have no ambition to avail myself of this occasion to be sensational, or to thrust my fellow prisoners and myself into prominence. My theme expands to proportions which obscure the victims of judicial tyranny, and yet, regardless of reluctance, it so happens by the decree of circumstances, that personal references are unavoidable. To wish it otherwise would be to deplore the organization of the American Railway Union and every effort that great organization has made to extend a helping hand to oppressed, robbed, suffering and starving men, women and children, the victims of corporate greed and rapacity. It would be to bewail every lofty attribute of human nature, lament the existence of the golden rule and wish the world were a jungle, inhabited by beasts of prey, that the seas were peopled with sharks and devil—fish and that between the earth and the stars only vultures held winged sway.

"In the great Pullman strike the American Railway Union challenged the power of corporations in a way that had not previously been done, and the analyzation of this fact serves to expand it to proportions that the most conservative men of the nation regard with alarm.

"It must be borne in mind that the American Railway Union did not challenge the government. It threw down no gauntlet to courts or armies—it simply resisted the invasion of the rights of workingmen by corporations. It challenged and defied the power of corporations. Thrice armed with a just cause, the organization believed that justice would win for labor a notable victory, and the records proclaim that its confidence was not misplaced.
The corporations,, left to their own resources of money, mendacity and malice, of thugs and ex—convicts, leeches and lawyers, would have been overwhelmed with defeat and the banners of organized labor would have floated triumphant in the breeze.

"This the corporations saw and believed—hence the crowning act of infamy in which the federal courts and the federal armies participated, and which culminated in the defeat of labor.

"Here and now I challenge the records, and if in all the land the American Railway Union has an enemy, one or a million, I challenge them all to stand up before the labor world and give a reason why they have maligned and persecuted the order. I am not here to assert the infallibility of the organization or its officials, or to claim exemption from error. But I am here to declare to every friend of American toilers, regardless of banner, name or craft, that if the American Railway Union has erred, it has been on the side of sympathy, mercy and humanity—zeal in a great cause, devotion to the spirit of brotherhood which knows no artificial boundaries, whose zones are mapped by lines of truth as vivid as lightning, and whose horizon is measured only by the eye of faith in man’s redemption from slavery."

For  more information about Eugene Debs and stay at the McHenry County Jail, click HERE. 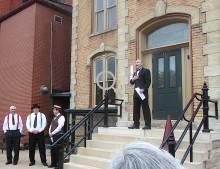