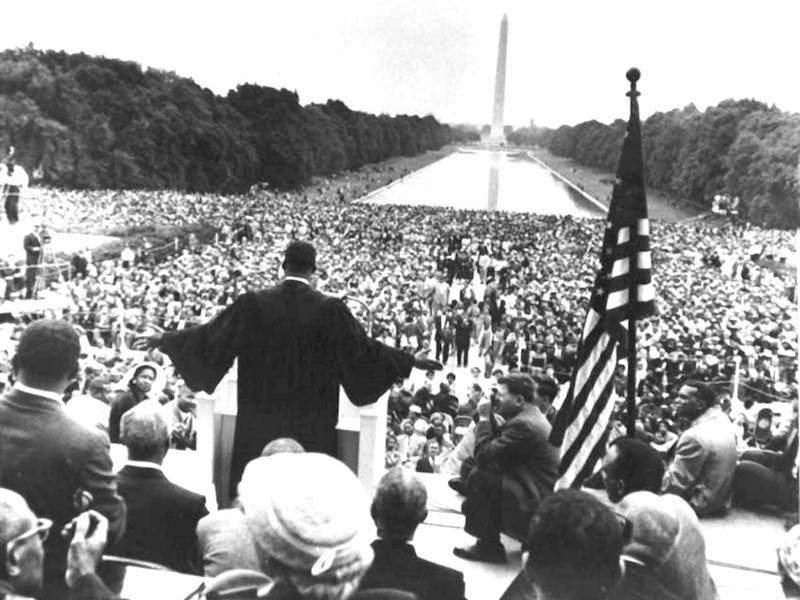 Much of the nation celebrated Martin Luther King Jr. Day a week ago, but with the passage of time, his life’s work has become more of an asterisk than a clarion for cultural change. Even Veterans Day, itself relegated to a few solemn flag ceremonies and perhaps a parade, carries more weight in our collective consciences.

That does all of us a great disservice.

Fortunately, the Martin Luther King Jr. Research and Education Institute at Stanford University in California offers a treasure trove of King information – including papers, speeches and other documents – that underscore an important fact: Dr. King, born Michael King on Jan. 15, 1929, was much more than a dreamer.

“I think when I get to Atlanta and go to my pulpit, I will try to preach a sermon in the spirit of the founding fathers of our nation and in the spirit of the Declaration of Independence,” King told those congregated on July 4, 1965, at Ebenezer Baptist Church in Atlanta. “And so this morning I would like to use as a subject from which to preach, the American Dream.

“It wouldn’t take us long to discover the substance of that dream. It is found in those majestic words of the Declaration of Independence, words lifted to cosmic proportions: ‘We hold these truths to be self-evident, that all men are created equal, that they are endowed by God, creator, with certain inalienable rights, that among these are life, liberty and the pursuit of happiness.’

“Now ever since the Founding Fathers of our nation dreamed this dream in all of its magnificence – to use a big word that the psychiatrists use – America has been something of a schizophrenic personality, tragically divided against herself. On the one hand we have proudly professed the great principles of democracy, but on the other hand we have sadly practiced the very opposite of those principles.

“But now, more than ever before, America is challenged to realize its dream, for the shape of the world today does not permit our nation the luxury of an anemic democracy. …”

The 15th annual Music4Martin concert is scheduled for 3:30 p.m. March 12 at Grace Lutheran Church in Woodstock. Ken West, the event’s producer and owner of Material Things Artisan Market in Woodstock, launched the effort with his two sons and a number of McHenry County College students in an effort to reignite King’s vision of bringing folks together.

“[King] would clearly be upset of how things have gone,” West said of all the turmoil across the country. “Things are better on the surface than they are overall. But is there less racism? It’s just not socially acceptable to admit it.”

West believes that discrimination has “gone kind of underground.” Schools and communities remain segregated. Citizens have become complacent. Several people I spoke with in the County Board office had never heard of the McHenry County Human Relations Council, although I’m told it still exists … in some fashion.

The same cannot be said for the Interfaith Council for Social Justice or the Diversity Day Festival, begun in response to the Ku Klux Klan rally at the McHenry County Government Center in 1995. The former was mothballed and later stopped a few years back, its former director Patrick Murfin of Crystal Lake said.

“King would not be happy about the things that have been happening. His message has been co-opted for years,” Murfin said. “We need to get back to it by rolling up our sleeves, going out and getting our hands dirty. You can’t sit on the sidelines.”

Murfin joined Maggie Rivera and a number of other McHenry County residents Saturday in the nation’s Capitol for the Women’s March on Washington.

“From the perspective of us Latinos, I think many became disillusioned that they are not being taken seriously,” said Rivera, Illinois’ deputy director for the League of United Latin American Citizens. “It has been more about laws and regulations; keeping us quiet and away from positions that could be influential in reversing that.”

But rather than folding up her tent, Rivera made her pitch elsewhere.

“I thought, ‘If I’m not making any dents here, I need to knock on higher-up doors and advocate at a national level.’ I did extensive traveling around the nation to bring more people into the loop so we could make a bigger snowball.”

In a quirk of karma, she believes the Trump administration might unwittingly galvanize people toward action.

“When you look at the very first massive deportations that we had here in the 1940s during World War II, that is when we became strong,” Rivera said. “Thank you, Mr. President. You just gave us a little fuel.”
Laura Crane, past chairwoman of Woodstock’s Cultural Diversity Commission, noted that when it gets right down to it, we’re all one nation … indivisible.

“We accepted a second language, and by doing that, we accepted everything that comes with it. We accepted two cultures,” she said. The challenge now is building bridges between them – regardless of race or gender.

“We live a fast-paced life, a time-consuming life,” Crane said. “It is important to see and hear different voices. … But it is intimidating for anyone to step into government roles. It takes that personal appeal to draw someone in and, almost, an offer to mentor them.”

And that is where events such as Music4Martin and its focus on young people comes in. West views the change in political winds as an “opportunity for dialogue” with teenagers who he believes are more socially aware but also increasingly cynical about government and politics.

“We hope to make them more aware of the power they have to make a difference,” West said.

“… I must ask why this prize is awarded to a movement which is beleaguered and committed to unrelenting struggle, and to a movement which has not yet won the very peace and brotherhood which is the essence of the Nobel Prize. After contemplation, I conclude that this award, which I receive on behalf of that movement, is a profound recognition that nonviolence is the answer to the crucial political and moral questions of our time: The need for man to overcome oppression and violence without resorting to violence and oppression.

“Civilization and violence are antithetical concepts. Negroes of the United States, following the people of India, have demonstrated that nonviolence is not sterile passivity, but a powerful moral force which makes for social transformation. Sooner or later, all the peoples of the world will have to discover a way to live together in peace, and thereby transform this pending cosmic elegy into a creative psalm of brotherhood. If this is to be achieved, man must evolve for all human conflict a method which rejects revenge, aggression and retaliation. The foundation of such a method is love.

“The torturous road which has led from Montgomery, Alabama, to Oslo [, Norway,] bears witness to this truth, and this is a road over which millions of Negroes are traveling to find a new sense of dignity. This same road has opened for all Americans a new era of progress and hope. It has led to a new civil rights bill, and it will, I am convinced, be widened and lengthened into a superhighway of justice as Negro and white men in increasing numbers create alliances to overcome their common problems.

“I accept this award today with an abiding faith in America and an audacious faith in the future of mankind. I refuse to accept despair as the final response to the ambiguities of history.”