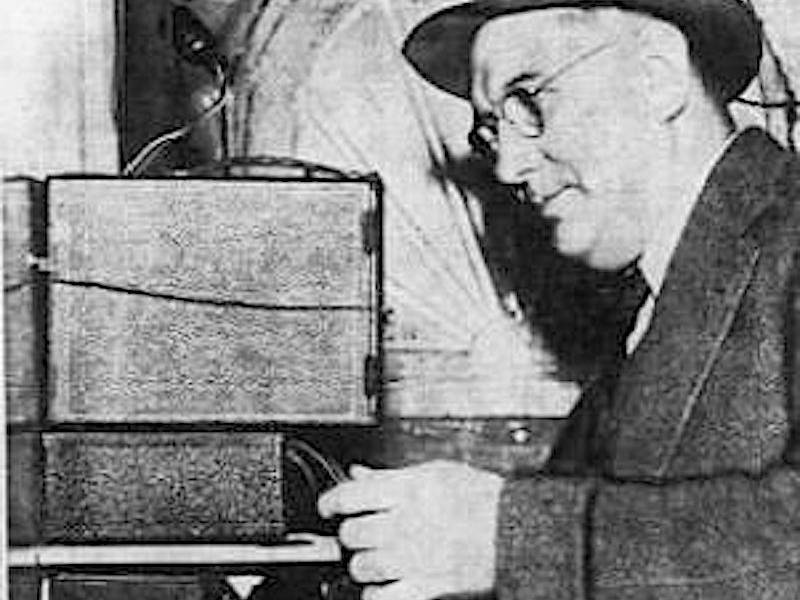 Today video cameras are almost everywhere. We’ve gotten so used to them that we go about our daily activities without giving them a second thought. But, they work! Just flip through any cable provider’s channels and you’ll see the finished product – hours of video footage turned into TV programs featuring “cops and robbers.”

That’s the entertainment aspect of security video. But there is another more important component: video or photographic evidence in court. It’s very possible that the story I’m going to tell you is the very first time a primitive security system – which consisted of a photographic camera, a mirror, and a photo-electric cell – was used to solve a crime.

During the summer and fall of 1939, authorities from McHenry County and Walworth County, Wis. wrestled with a crime spree! In July crimes were committed in Harvard, Hebron, and Clinton, Wis. The thieves targeted cars and took tires, clothing, groceries, a battery, and - in a few cases - they stripped parts from the vehicles. In Harvard they also hit Gordon’s Junk Yard and ran off with a ton of junk metal. The following month the thieves burglarized Boyce Brother’s service station and the Dining Car Tavern in Woodstock, the E.L. Brunswick service station and general store in Crystal Lake, and the Cottage Inn Restaurant in Harvard.

The thefts and burglaries continued through September, October and November. It seems that these rapscallions were opportunists and not too picky because they took whatever they could get their hands on: gasoline, oil, tools, candy, cigarettes, liquor, tobacco and money.

One of the victims of the burglaries was Dr. E.L. Brunswick, who practiced medicine in Chicago and on Route 31 in the vicinity of Crystal Lake. Brunswick also ran a service station and general store as a side business at the intersection of Routes 31 and 176, across from his medical practice. He eventually grew weary of going to bed at night and waking up in the morning to discover that his service station had been targeted by burglars. It is not known how many times his business was broken into but it was definitely more than once.

On the night of Nov. 7, 1939,  Brunswick hit pay dirt when a clueless burglar entered the station and broke the beam. The flash bulb ignited and flooded the room with light, the camera snapped a picture, the siren wailed, and the burglar ran out of the building – but not before the camera immortalized his image on film. The following morning McHenry County Sheriff Lester Edinger came to the scene of the crime and Brunswick handed the astounded sheriff a photograph of the burglar. Unfortunately, the identity of the person in the photograph was a mystery that still needed to be solved.

A few weeks later Sheriff Edinger questioned 19-year-old Harold Lewis, a farmhand from the Woodstock area, about some petty thefts that occurred in Harvard. The sheriff sensed a familiarity with the man that he was talking to and it finally dawned on him that it was the man from Dr. Brunswick’s photograph! When confronted with the photograph, Lewis denied it was of him. Lewis held firm for a short while but eventually he admitted to his crimes in a 12-page written confession, and he identified the members of the burglary ring.

The Daily Sentinel in Woodstock announced in its Nov. 24, 1939, edition that five men had been arrested for the crime spree. In addition to Lewis the article identified the burglars as Richard Nielsen of Clinton, Wis.; and Walworth County residents Bernard Nichols, Allamander Schubert and Fred Volz. Lewis and Nielsen were locked-up in the McHenry County Jail, and the other three men were left to cool their heels in the Walworth County Jail in Elkhorn, Wis.

In this case the judicial system worked fast. Because Lewis cooperated he received probation for his part. He also spent five months in the county jail while waiting for a case resolution. Nielsen decided to play hardball with the authorities and he received a sentence from one year to life in an Illinois penitentiary. Nicholls and Allamander were sent to the prison in Waupon, Wis, and their sentences are not known. Volz had very little, if any, involvement in the crimes and his fate in this matter is not known.

This crew of criminals may have continued to wreak havoc on the good citizens of McHenry County if it weren’t for the annoyed Dr. Brunswick and his ingenious invention.

• Ed Urban is a local historian from Marengo. He may be reached at eurban@foxvalley.net
Published in the April 2020 issue of the Marengo Union-Times