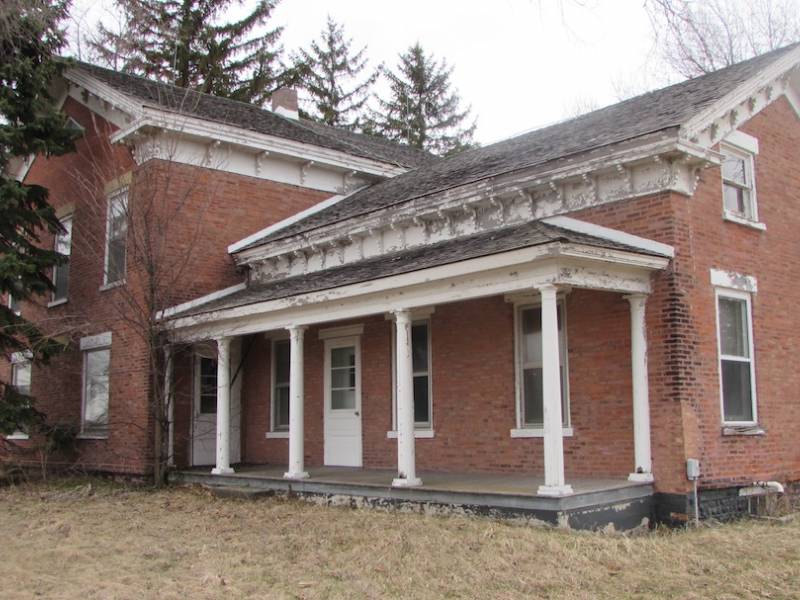 The military calls it “defense in depth,” a strategy whereby the goal is to delay rather than prevent a foe from advancing. It is the same strategy being employed by Canadian businessman Edward Gong and his company, Edward Harvard Holdings – owner of the 1.5 million-square-foot Motorola manufacturing facility on Route 14 in Harvard.

And caught amid all of this legal maneuvering and entrepreneurial sleight of hand is a historic farmstead, the 1855 Coventry House at 7704 Route 14. The home dates to 1855, when Capt. William H. Coventry and his wife, Maria Van Hosen, bought the property and built the home. In 1940, the house and barn received the Henry Horner award for “Most Beautiful Farm.”

The farm was plaqued by the McHenry County Historical Society’s Historic Sites Committee in 1989 because of its historic value. The County Board extended it landmark status in May 2016. As we like to say in the history biz, it’s “got bones.”

But after years of neglect, the once beautiful retreat for visiting Motorola executives is poised on the cusp of irrelevance, yet another historic building unceremoniously relegated to a growing roster of former theaters, schoolhouses, mills, breweries, depots, dairies and – most definitely – farms on the scrap heap of our past.

An inspection of the site by the McHenry County Department of Planning and Development in June 2017 discovered broken or missing windows, debris, water damage from at least two holes in the roof, a failing masonry wall, stress fractures in the foundation, failing ceiling joists and beams, invasive vegetation inside and outside the building, and damaged or missing wood flooring. Since then, Harvard has rescinded its intergovernmental agreement with the county and gone it pretty much alone … until now.

In July, Harvard responded to attempt by Gong to vacate a Dec. 11, 2019, default entered against it based on a federal restraining order adopted on Oct. 5, 2018. In the defendant’s mind, it amounted to a “get out of jail free” card. However, frustrated City Attorney Timothy Clifton continued to hammer home the need for basic life/safety repairs in the building to ensure it follow codes and remain viable for redevelopment.

“… The defendant’s unwillingness to play by anyone’s rules aside from their own significantly outweighs the hardship to the defendant, who has been given nothing but an opportunity to play by the rules for in excess of a year and chose to simply do nothing,” Clifton wrote.

The city’s request of Judge Thomas Meyer is simple: Direct Edward Harvard Holdings to make the necessary repairs or consider the property to be abandoned and facilitate its transfer to U.S. Marshals Service for sale to someone who will.

Gong’s attorney, Michael Walsh, argued that time was needed to finalize a purported $16 million cash offer for the property, which includes the Coventry house and barn. Meyer gave him until 1:30 p.m. Oct. 20, to finalize the contract.

Attorney Peter Baugher, who is representing a party possibly interested in buying the Harvard property, argued in the Zoom county court proceeding Oct. 6 that Gong’s track record is littered with failed promises – ranging from shoddy maintenance to nonpayment of taxes. He urged an affidavit attesting that the purchase offer was legitimate, something Walsh refused to do.
“These have been designed to get delays, to stretch the proceedings out,” Baugher said.

“Edward Harvard Holdings is still the owner and is subject to the municipal code,” he said. “We can’t just stand here and do nothing and watch the property continue to deteriorate.”
Unfortunately, that is precisely what has been happening since Motorola pulled up stakes in 2003.

The Illinois Department of Transportation has hired Pennsylvania engineering firm WSP USA Inc. as a project manager for extending a rail line through Huntley to Rockford. The company is charge of preliminary engineering and environmental analysis before final design and construction. IDOT will negotiate construction and maintenance agreements with Union Pacific and Metra.

Slated to follow Metra’s Milwaukee District West Line from Chicago’s Union Station to Big Timber Road in Elgin, and then Union Pacific freight tracks to Rockford, it was initially suggested that Amtrak carry passengers. That has since evolved to include Metra, at least as a secondary carrier, despite the fact that neither Boone nor Winnebago counties are part of the Regional Transportation Authority.

Fueled by $275 million in Rebuild Illinois money, a reboot of the old Black Hawk line could bring service to downtown Huntley – if the village doubles down on the money it has already spent to turn a portion of the 33,100-square-foot former H.D. Catty Corp. building at 11117 S. Church St. into a depot. The village bought the abandoned plant from packager Catty Corp. in February 2017 for $435,690 and has spent money on design plans for a train depot and parking lot on village-owned property at Main and Church streets.

In the past few weeks, Crystal Lake and Fox River Grove have maintained their ban on backyard chickens. Johnsburg is considering a request from a local teenager.

Following a $50 permit, Fox Lake residents can have up to four hens on lots less than an acre and up to eight hens on larger lots. Wauconda allows up to four hens per lot and prohibits roosters. All birds must be kept on properties with single-family dwellings and contained in a coop or run. Prairie Grove limits chickens (six) to properties zoned E-1, estate. It also requires a permit and an enclosure of no more than 50 square feet that allows a minimum of 3 square feet per bird.

Unincorporated McHenry County has allowed up to six hens on residential lots since 2014.

Over the years, virtually every community has considered requests allowing backyard chickens. Concerns have ranged from smell to noise, from fears over serious injury to the nuisance of wayward birds. Marengo’s 1899 ordinance book, for example, prohibits the “running at large of horses, mules, cattle, sheep, swine, goats and geese” within the corporate limits on “any street or unenclosed land” without the consent of the owner. About the only way to run afoul of the law was to string up barbed wire or allow birds to venture onto the sidewalk or road.

But at that time, during a more agrarian economy, people frequently scratched out an existence by raising their own food – including gardens and eggs. You know, kind of like now. The upshot is, until we have more of a track record concerning this chicken or egg debate, expect the feathers to fly.

Tickets remain available for the Heritage Quilters’ 2020 Raffle Quilt, “Fit to be Tied.” The bow-tie pattern dates to the 1880s and was first published by the Ladies Arts Company in 1895, with a center block of applique. The bow-tie block alternates with a 1930s green and boasts a center block of applique for added interest. Tickets are $1 each or six for $5 and available online at www.gothistory.org.