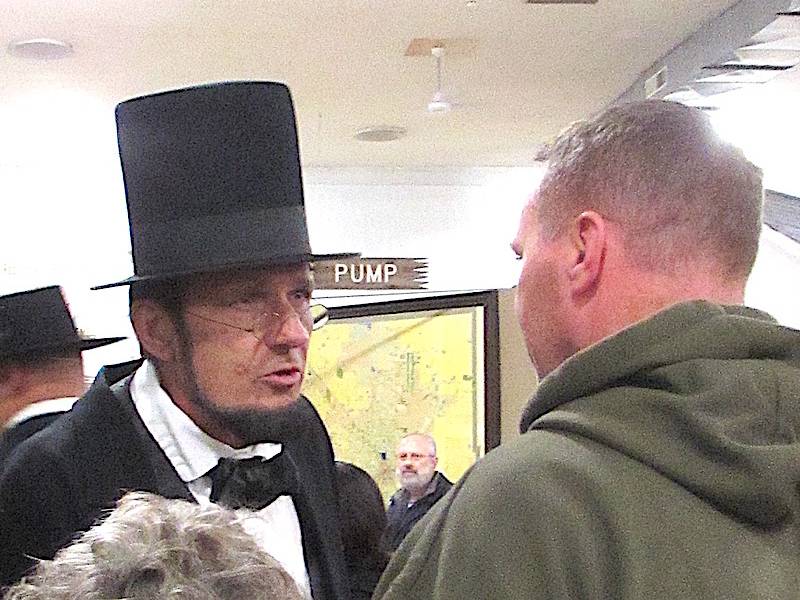 You’d think the author of the Emancipation Proclamation would be above reproach when it concerns civil rights protests. Not so.

Boston agreed to remove “The Emancipation Group,” a controversial statue depicting Abraham Lincoln standing over a half-dressed, freed slave – broken shackles around his wrists. It is a replica of the “Emancipation Memorial” in Washington, D.C., created by 19th century sculptor Thomas Ball. Lincoln holds a copy of the Emancipation Proclamation in in one hand while an African American stares upward toward the horizon.

But is he looking toward a brighter future or cowering before his liberator? It’s all how you look at it.

“Its content and context,” said George Buss, a Lincoln re-enactor from Freeport. “This is a teaching moment for the country, if not the world. I’ve always believed that public art should be a catalyst for public discussion. We are, indeed, having that discussion now. Statues beget three questions: Who put it up, when did they put it up and why did they put it up?”

A statue of abolitionist Frederick Douglass was torn from its base in Rochester, N.Y., earlier this month, while in Chicago the park district fast-tracked renaming Douglas Park – in honor of Stephen A. Douglas – to (Frederick) Douglass Park.

Clearly, we’re all feeling our way.

The Douglas tomb, an Illinois state historic site located at 636 E. 35th St. in Chicago’s Bronzeville neighborhood, has been criticized for appearing to “look down” on blacks. The statue sits atop a 96-foot tall granite tower completed in 1881 – overlooking the mausoleum where Douglas’ body is entombed.

However, Buss said he has evidence that debunks that theory.

“I have the original bylaws of the Douglas Monument Association, and the secretary of the group was Leonard Volk,” he said. “That primary source talks about the figure of Douglas overlooking Lake Michigan and facing Washington, D.C., not looking down his nose at the neighborhood around the tomb. That was his [Cottage Grove] estate on the near South Side. He loved Chicago.”

Buss is partnering with the Illinois Arts Council to present online presentations of “Lincoln, The Great Communicator” around the state. The live performances combine period music by folklorist Chris Vallillo, with conversation and narrative by a costumed Buss – highlighting the president’s skill as an orator with his own words. A Q&A will follow each performance and performances are broadcast on the “Looking for Lincoln” Facebook page and YouTube Channel.

Buss believes this is a time of “real positive play” for Honest Abe.

Despite some criticism, Buss believes Lincoln’s reputation remains unscathed.
“At the Illinois State Fair last year every third person said, ‘I’m going to vote for you,’” he said. “And when I told them that I was already elected to two terms, some folks got downright angry!

“The time is right for something. What that is and who it is? That’s for others to decide.”

Speaking of Lincoln, I was saddened to learn that the Continental has reached the end of road. Ford Motor Co. plans to end production of this sedan – with its interesting pedigree – at year’s end. President John F. Kennedy was riding in a Continental convertible when he was assassinated on Nov. 22, 1963, in Dallas.

When Elvis Presley married, manager Colonel Tom Parker gave the newlyweds this new 1967 Lincoln Continental as a wedding present. The list of other famous Continental owners includes: Nelson Rockefeller, Frank Sinatra, Cecil B. DeMille and architect Frank Lloyd Wright. Wright, who bought two, considered it “the most beautiful car in the world,” according to Ford. The Museum of Modern Art in 1946 chose it as one of the eight cars epitomizing design excellence.

Introduced in October 1939, its history includes many incarnations. Production lasted until 1942, including the dropping of “Zephyr” during the 1941 model year. Suspended during World War II, it resumed from 1946-48, again between 1958-1980, and once more in 1982-2002. Lincoln reintroduced the model in 2017 as a replacement to the MKS, but declining interest in sedans marked its end … at least for now.

The results of a new COVID impact survey of American museums is sobering, to say the least. A survey of 750 museum directors by the American Alliance of Museums, found that as many as a third of all museums may close permanently because of the pandemic. AAM is urging Congress to include $6 billion for museums in future relief legislation.

“Museum revenue disappeared overnight when the pandemic closed all cultural institutions, and sadly, many will never recover,” said Laura Lott, president and chief executive officer of AAM. “Even with a partial reopening in the coming months, costs will outweigh revenue and there is no financial safety net for many museums. The distress museums are facing will not happen in isolation. The permanent closure of 12,000 museums will be devastating for communities, economies, education systems and our cultural history.”

Colleen Dilenschneider, chief market engagement officer at IMPACTS Research & Development, noted museums: Make you feel good, make you smarter, teach in an effective way, offer an opportunity for a shared family experience and serve as a catalyst for community engagement.

“Research has uncovered that creating community involvement is more about location than the activity at hand,” Dilenschneider wrote, “and this kind of location-based learning [like the kind utilized in museums] is a trigger for change and development within the community.”

The McHenry County Historical Museum, which has offered timed entries to its members, will begin including the general public next month. As now, masks and temperature checks will be required. Visit GotHistory.org for details.
“Museums are not only stewards and interpreters of our culture, they are vital sources of employment and economic engine,” according to AAM. “Museums support 726,000 direct and indirect jobs and contribute $50 billion each year to the economy.”

Even more to the point, historical museums are the caretakers of your past … but only if they have a future.

Pieces of history can be had … if you know where to look. The McHenry County Historical Society has an 1800s mortise & tenon loom available and Friends of the Old Courthouse are selling original windows from the 1857 courthouse on the Square. You get you an actual, large window from the Old Courthouse with an accompanying iron weight that you can refurbish, reuse, decorate and/or display for $80. Visit /friendsoftheoldcourthouse.org/support/shop/.

Colonel Palmer House, 660 E. Terra Cotta Ave. in Crystal Lake, opened two new exhibits in mid-July. “Faces of Education” features the history, teachers and administrators of the elementary and high school districts of Crystal Lake, from their combined beginning as Union School, eventual separation into Community High School and Union Grade School, and ultimate formation of Districts 47 and 155. “A Peek at the ’20s” examines what life was like in Crystal Lake a century ago. Learn about local transportation, religion, entertainment, recreation, politics, fashion in the era of Prohibition and suffrage. For information, call 815-477-5873.