Citizens court a courthouse for posterity 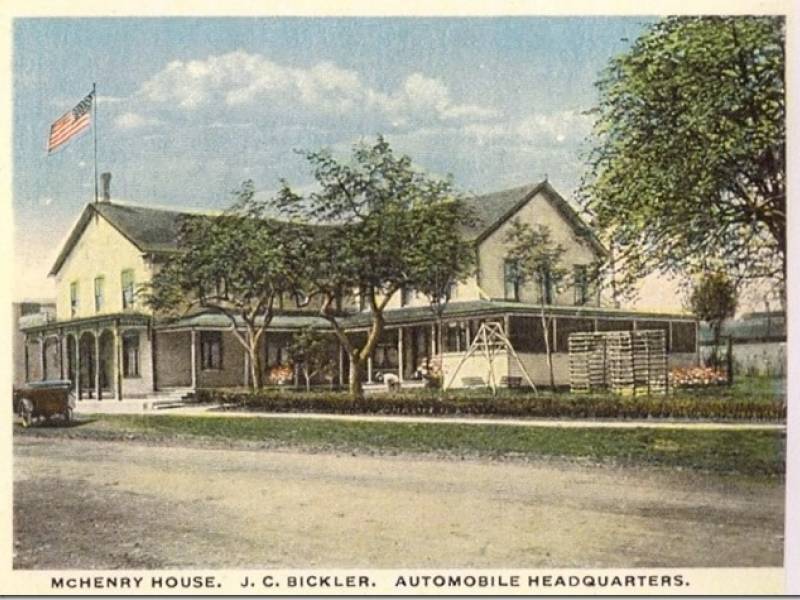 Citizens court a courthouse for posterity

Perhaps there’s just something about courthouses in this county.

Woodstock, with the help of McHenry City Administrator Derik Morefield, saved the 1857 McHenry County Courthouse and adjacent 1887 sheriff’s house in 2011 – pulling this iconic structure off the scrapheap and preserving it for future generations.

And now the county’s first courthouse, once located on another square in yet another town, could be endangered. And, ironically, Morefield could play a pivotal role in saving that building, as well.

Dan Smith of McHenry owns what now is the Town Club, a combination bar and boarding house at 1401 Riverside Drive in McHenry. Smith would like to sell the property, and rumors are flying. Could the building that once served as the focal point of county government be leveled for a parking lot? Could it fit into an expanded After the Fox restaurant? Or is there another option that would preserve the building?

Morefield said there is a prospective buyer who would turn the building into a restaurant.

“I have an appreciation for what that building means to McHenry County,” Morefield said. “I want to make sure the structure of the building is maintained.”

After three years of planning and negotiating, Rufus Soules and Caleb Davidson built the county’s first government center in 1838 on the public square in McHenry, now Veterans Park. County commissioners met for the first time there Aug. 5, 1840.

When Lake County split off from McHenry County in 1844, the county seat moved farther west to Centerville (Woodstock). Sheriff Henry M. Wait conducted a public sale of the former courthouse Jan. 8, 1844. The buyer, Horace Long, moved the building from the park to the northwest corner of Riverside Drive and Pearl Street.

Long remodeled the building into a hotel in the 1860s and called it the “Mansion House.” The most well-known owner of the McHenry House was Jacob C. Bickler. Bickler’s 1944 obituary stated, “For 30 years, he was the owner of the McHenry House, one of the finest hotels in this vicinity.” Bickler is believed to have assumed ownership of the building sometime between 1911 and 1913.  He retired from the business in 1939.

A trip through old McHenry phone books showed a succession of names and owners after Bickler. It was the McHenry Town House (Myrtle Fels) in 1941 and 1945, and the McHenry Town Club (William Wolf) in 1942. McHenry historian Pat Wirtz speculated that Fels ran the hotel and Wolf operated the bar/restaurant.

William Comes operated it briefly in the mid-1940s before Mr. and Mrs. Herman Buck changed the name to Buck’s Town Club in the late ’50s. By January 1959, it was Tipton’s Town Club, and the following year, it had become Ernie’s Town Club, under the ownership of Ernest Muzzillo.

The Food and Drug Administration is in the process of revoking standards unique to frozen cherry pies. Adopted in 1977, the rules state that cherry pies must contain at least 25% cherries by weight, with no more than 15% of the cherries blemished.

It is hard saying what is in that frozen peach or apple pie. The U.S. Department of Agriculture requires that “fruit pie fillings must be prepared from fresh, frozen or canned fruit, or a combination thereof, except that dried fruit may be used for apricot, apple or raisin pie filling.” But as far as I was able to decipher, there is nothing that dictates how much of that needs to be fruit – versus additives such as high fructose corn syrup, vegetable oil, sugar and corn syrup.
Before the 1906 Pure Food and Drug Act, most food oversight was relegated to the states, and what existed had more to do with regulating trade. But the public tired of such “snake oil” salesmen, and Congress adopted a number of consumer protection laws that led to the creation of the FDA. The Fair Packaging and Labeling Act of 1967 followed. It directed the Federal Trade Commission and the FDA to issue regulations requiring that all “consumer commodities” be labeled to disclose net contents, identity of commodity and name, and place of business of the product’s manufacturer, packer or distributor.

More than dictating hygienic conditions at processing plants, these laws mandated labeling and established penalties for “adulteration,” whereby cheaper substitutes were used. The idea was – and is – to reassure consumers that they were getting what they paid for.

A 2013 study published by the Journal of Food Science identified some of the worst offenders. The list included maple syrup, apple juice, coffee, orange juice, olive oil and milk. Substitutes range from molasses sugar in honey to palm oil in olive oil and the use of corn, rather than maple syrup. Even more problematic were incidents of sawdust in chili powder and chalk power in sugar.

The FDA also is reviewing the standard for French dressing – the only dressing subject to certain percentages of vegetable oil and citric or malic acid – and the standard for milk. The almond and coconut crowd liberally bandy about the term “milk,” which FDA regulations define as coming from a cow.

I’m not sure where that leaves goats. Perhaps out to pasture?

Tickets for an opportunity to win the McHenry County Historical Society’s Heritage Quilter’s latest effort – “Honoring Adelia” – are available online or in the society’s office in Union. An 1861 diary entry by county resident Adelia Thomas references her piecing and quilting with friends and neighbors. With many male acquaintances off fighting in the Civil War, it is not hard to imagine that she would have quilted and tied comforts to send to soldiers. For information about this beautiful, nine-patch quilt, visit www.gothistory.org.