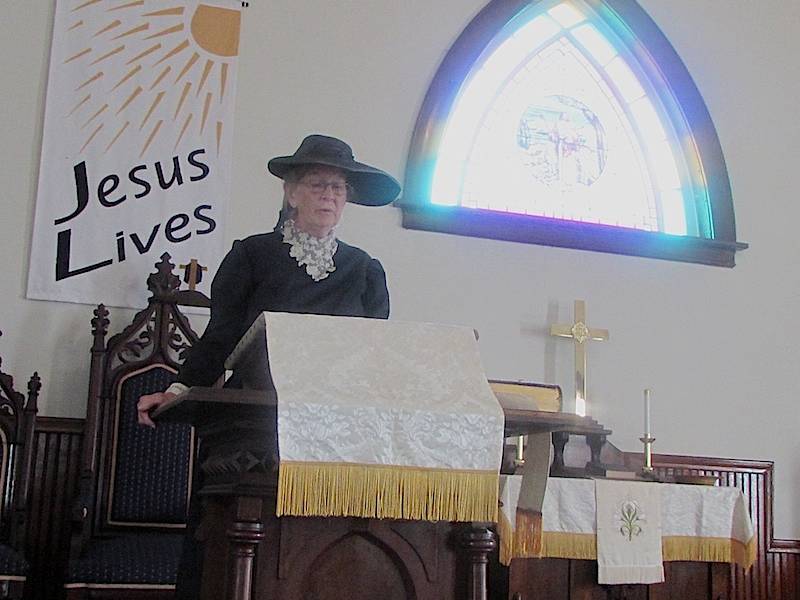 So if you’re trying to bring religion to a bunch of pioneers scattered across hell’s half acre, what do you do? You bring the shepherd to the flock.

That was the idea behind circuit-riding preachers, most often affiliated with the Methodist Episcopal Church. Methodist clergy could be appointed to circuits wherever people settled – often riding between churches on horseback. Although these traveling clergy, or “saddlebag preachers,” officially were never called “circuit riders,” its appropriateness helped it stick.

Methodist worship was expected to be enthusiastic. Some would cry.  Some would shout. Sinners would moan. Saints would rejoice.  Prayers and testimonies would mingle with swaying and circle shouts.

A typical worship service would have included a “call to worship” hymn; a prayer – almost exclusively off the cuff and generally longer than shorter; a text of Scripture would be “given out.”  This text could be as long as a chapter or as short as a verse or two and typically related to the sermon; followed by another hymn. Many of the well-known gospel hymns we’ll no doubt sing later were not written until after the Civil War. Even older hymns, such as Amazing Grace, may have been rejected as being too “new fangled.”

Congregations sang a cappella – alternately reading and then singing a couple lines at a time.

Instruments, such as the piano or pump organ, were difficult to find and transport west on a wagon. Even those of the more portable variety, such as the violin, banjo and guitar, were considered tools of the devil. Fifes, brass, and drums were military instruments.  Most Methodists opposed war nearly to the point of pacifism.  They would have found such instruments unsuitable.  The only exception was the need to call people to worship in a larger location like a camp meeting, were a trumpet was sometimes used to gather folks.

A 19th-century poem written by Alvaro Dickenson Field – who went by the name, A.D., for obvious reasons – likens the sound of instruments to the sound of lost souls in hell. It is called “The Violin.”

‘T was midnight in the spacious hall,
Where music ruled the gorgeous ball,
And swiftly sped the dancers feet,
As the pace of a deer so wild and fleet;
But the violin shrieks like a dying soul,
That has reached at last its dismal goal

Then loud and wild is the dancers cry,
As over the floor they swiftly fly.
The mirth runs high the wine flows free
As the hours of night so merrily flee
But the violin wails in will despair
As if tortured souls were imprisoned there!

There is joy ‘mid the waltzers on the floor
As they trip so gayly the figures o’er;
And the murky lamps gleam more dim,
As pleasure's cup is filled to the brim
But the souls of the dancers speak in the strains
As the violin shrieks in its deathly pains.”

The main event  of any circuit service was preaching. The sermon, then as now, was the heart of worship. Because it was considered an exposition, or explanation, of Scripture a preacher typically had to be licensed and/or ordained to deliver the sermon. It was not usual for such sermons to last 45 minutes to an hour.

Following the sermon was an “exhortation” – a type of cheerleading designed to drive home the point of the sermon – sometimes delivered by additional preachers on site or by a local lay person certified as an exhorter.  Any exhorters out there?

And then, finally, came the exercises: Testimonies and prayers from attendees before the congregation. One western preacher remembered a meeting in Ohio where a young mother was giving a testimony of great power.  A lawyer present exclaimed that he had never heard such eloquence.  When her baby was brought to her, the mother commenced breast-feeding and continued the testimony unabated.

Circuit riders were used across North America from the start of the denomination in the 1760s through the 1840s. In these parts it was used during the period of Native American missions and European settlement, starting in the 1820s.

The Rev. Dan Swinson of the Sycamore United Methodist Church, a student of the circuit-rider phenomenon, said sophistication eventually did in the traveling preacher. “The desire to reach the middle class with finer buildings, pews, instruments, choirs, Sunday Schools, family programming and a quieter, more formal approach to worship, along with a decline in circuits and the establishment of individual churches for most preachers, began undoing this approach in as early as the 1840s,” he said. A decade latter it had vanished in Northern Illinois. Although there still are places where it still is used on a Sunday-by-Sunday basis.

About 40 people attended the Circuit Sing-along Sept. 25 at the 1898 Riley Methodist Church. Thanks to everyone who attended and who generously donated to help the Society to maintain and preserve the church. A special thanks, also, to keyboardist Tracy Piper, song leader CJ McCleland and guest circuit rider Sharon Bullmer.