Circle may have faded, but it remains unbroken

Home » Circle may have faded, but it remains unbroken 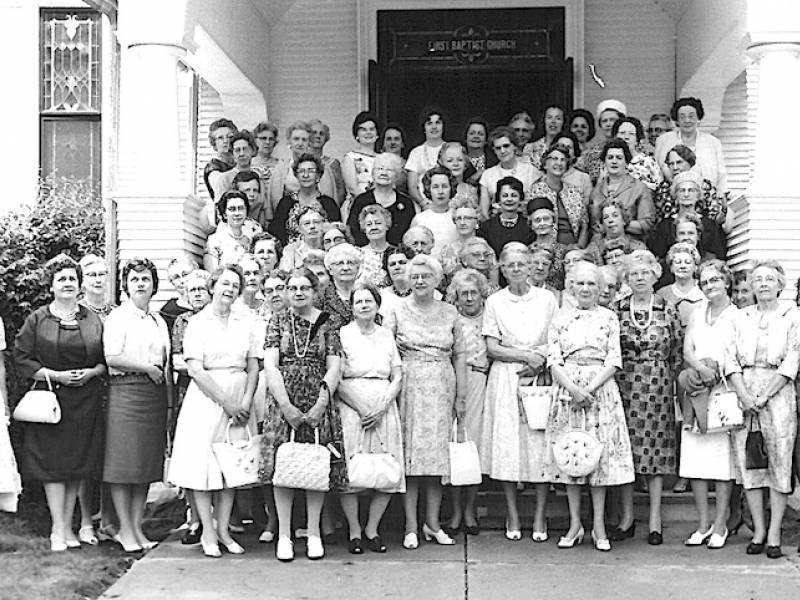 Circle may have faded, but it remains unbroken

Members of the Marengo Ladies Home Circle gathered on June 18, 1963, at the Marengo Baptist Church. Among the influential women pictured are Helen Shurtleff Kelley (far left, front). Her father was Judge Edward Schurtleff and her mother, Elizabeth, was an advocate for women’s rights.

Since 1878, the Ladies Home Circle of Marengo served as a doorway for newcomers to town and a treasure trove of local history, passed down through the generations.

On Sept. 11 that ended, when a small group of holdovers gathered for one last lunch. Membership had dwindled from a high of 79 to eight, despite the fact that dues had weathered inflation admirably – climbing from a quarter to just $1 after all of these years.

Older members had died or moved away and younger women are too busy nowadays between working and raising children.

But the club’s legacy continues in the memories, stories and archive of pictures and minutes donated to the McHenry County Historical Society.

The Kishwaukee Farmers Club gave rise to the group, by inadvertently serving as a gathering point for the women who prepared the meals for their husbands in the club. The ladies decided they needed their own group.

Organized with the help of Mrs. Maria Louise Rogers Seward – sister-in-law to Abraham Lincoln’s Secretary of State W.H. Seward – there were 13 charter members. The initial meeting was in Seward’s home, located at 19809 E. Grant Highway in Marengo, and meetings continued on the third Wednesday of each month. The meeting hostess, who typically entertained and fed 12 to 15 people in her house, also was responsible for readying the club-owned table settings and linens.

And they had better be washed and ironed just so!

“When you first came to Marengo back then, you weren’t accepted at face value,” said Marcia Lockwood, wife of a prominent doctor in town and a Circle member since 1963. “I remember that in its heyday there was [local historian] Eleanor Corson. How would you have reckoned with her?”

When vacancies occurred, first consideration was given to daughters and daughters-in-law of members. There also were legacy members. Regardless, you had to be invited. Women nominated for membership also required two sponsors and the unanimous vote of club members present during a closed-door meeting.

The club’s aims included home improvement and intellectual advancement. Topics ranged from making butter to Temperance to female American authors. But the social graces figured prominently. It was a matter of tradition to greet other Ladies Circle members with a handshake and an amusing quip or saying. Women made a point of arriving early, Lockwood said. There were fewer people to address.

A nomination was followed a meet-and-greet of sorts, in which a candidate’s manners, sociability and personality were scrutinized to ensure she would fit in, and then a closed-door vote.

Joining the Circle amounted to a Good Housekeeping stamp of approval.

“You were a big shot,” 50-year member Betty Struckmeier said with a smile. “You were accepted into the upper crust of the community.”

An early history of the Ladies Home Circle, written by Dorothy Jevne on the occasion of the club’s 90th anniversary, recorded a seminal moment at a Farmers Club meeting in which guest speaker, suffragette Elizabeth Cady Stanton, put her hosts in their place … much to the ladies’ delight.

“Mrs. Stanton took notes on everything the men said and in rebuttal reminded the men that the chief part of raising boys was done by women, that half of the products of the farm belong to farmers’ wives, and that it was the duty of men to see that the women’s cooking utensils were as good and up to date as the farm machinery.”

Lockwood said she will miss all of the camaraderie, the visiting with friends.  Member Nancy Clinnin especially is grateful for all of the friendships she made. Meetings were a touchstone, a chance to catch up on the latest scuttlebutt and hear news about the “kids” who had grown up and moved elsewhere.

But for Barbara Carder, it was also about keeping local history alive and learning about the community’s past. Had a question? Someone at a Circle was bound to have the answer – or knew someone who did.

Two historic structures are scheduled for plaquing in the coming weeks.

The McHenry County Historical Society's Historic Sites Committee will plaque the Schmitt Chapel site at 1 p.m. Saturday, Oct. 19, at 2500 N. Chapel Hill Road. Frederich Schmitt built the chapel in 1843, about a mile south of Johnsburg on what was originally Pistakee Bay Road. While on the journey from Germany, the ship that carried Schmitt encountered a severe storm. Fearing for his life, Schmitt promised if he survived the voyage, he would build a chapel.

The chapel is part of the 99-acre Chapel Hill Country Club, owned by village since 2017.

After two years of waiting for a new McHenry County Historic Preservation Commission to be reconstituted, the 1886 Ford School will be landmarked by the county at a special ceremony at 6 p.m. Wednesday, Oct. 23.

The restored, village-owned one-room school was relocated in 2012 to 304 Ramble Road. The program begins with an old-fashioned school lesson, courtesy of retired educator Karen Parks; followed by a summary of the school’s history by one of its chief preservation proponents, Bob Spooner.

The McHenry County Historic Preservation Commission recommended in July that the site be designed a local landmark. The county board concurred on Aug. 20.

The city of Waukegan is expected to transfer ownership of the historic Carnegie Library to the Waukegan Park District and Waukegan Historical Society later this year or early 2020.

The 1903 building, listed on the National Register of Historic Places, is one of 105 libraries built in Illinois by philanthropist Andrew Carnegie.

It remained in use until 1965 when the library relocated. Since then it has fallen into disrepair. In 2018, the Waukegan Historical Society commissioned a structure report and conceptual design study on the building as a potential site for its growing collection and archives, as well as exhibit space. It has been mentioned as a site for future museum dedicated to author Ray Bradbury.