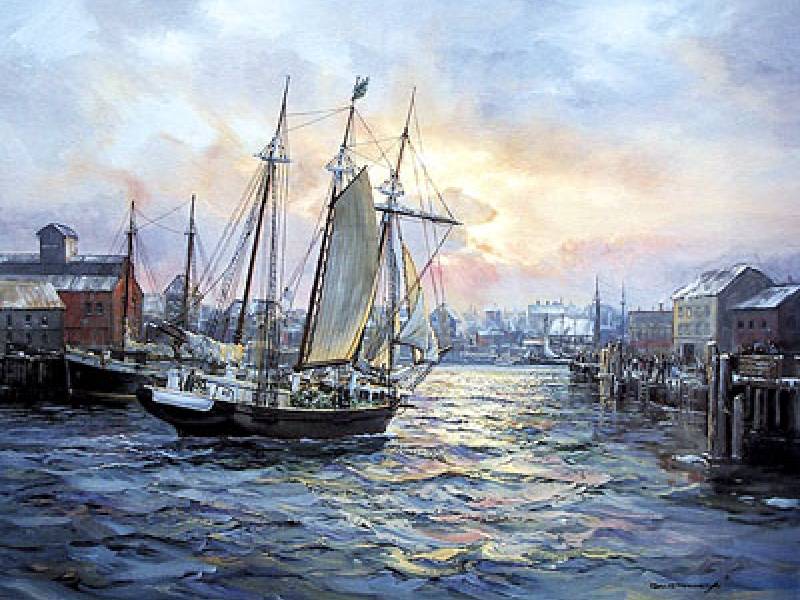 In October 1971, a scuba diver searching for an entirely different wreck found the 123-foot Rouse Simmons, resting upright 172 feet beneath the surface of Lake Michigan, near Two Rivers, Wisconsin.

The three-masted, 205-ton schooner, built in 1868 by Allan, McClelland & Co. in the Milwaukee Shipyard, was named after a well-known Kenosha, Wisconsin, merchant – brother to Zalmon, who founded the Simmons Bedding Co.

By the late 19th and early 20th centuries, the popular German tradition of decorating an evergreen tree fueled a demand for trees. Author Glenn Longacre noted that an estimated two dozen schooners would make late-season runs from northern Michigan and Wisconsin – before the worst storms and ice made lake travel too hazardous – loaded with thousands of Christmas trees for busy Chicago waterfront markets. The Rouse Simmons was among them.

Trees were sold directly from their berths along the Chicago River’s Clark Street docks, and customers were invited to board and make their selections. Longacre wrote that electric lights “strung from the schooner’s bow to stern” allowed boat operators, including Capt. Herman Schuenemann of the Rouse Simmons, to sell trees, wreaths, garlands and other holiday decorations around the clock.

By 1912, Schuenemann was a veteran schooner master who had hauled Christmas trees to Chicago for nearly 30 years. On Nov. 22, 1912, the Rouse Simmons, heavily laden with 3,000 to 5,000 Christmas trees, left the dock at Thompson, Michigan. Unfortunately, Schuenemann’s departure coincided with a tremendous winter storm that eventually claimed several ships.

The next afternoon, a surfman at the Life Saving Station in Kewaunee, Wisconsin, spotted the Rouse Simmons heading south and flying its flag at half-mast – a universal sign of distress. A rescue boat, launched from the Two Rivers station to the south, could find no trace of the schooner.

Later this month, the Crystal Lake Historical Society will present author Rochelle Pennington – author of 10 books, including “The Historic Christmas Tree Ship: The Story of Captain Santa” and a follow-up documentary book, “The Historic Christmas Tree Ship: A True Story of Faith, Hope and Love.” The latter includes more than 60 photographs, along with hundreds of citations from century-old newspaper clippings spanning 140 years.

Pennington will share what she has learned at 1 p.m. Nov. 19 at Park Place, 406 W. Woodstock St., Crystal Lake. View century-old photographs and artifacts, and learn little-known facts surrounding the Christmas Tree Ship. Admission is $5 for historical society members and $8 for nonmembers. For tickets, call 815-455-1151 or visit cl-hs.org/product/the-christmas-tree-ship.

A modern archaeological survey of the wreckage site suggested an excessive load might have caused it to flounder. However, it might well have been a combination of bad weather and years of hauling heavy loads of lumber that sealed the ship’s fate – only seven months after the Titanic struck an iceberg in the North Atlantic.

After the tragedy, Barbara Schuenemann and her three daughters continued the family’s Christmas tree business, transporting trees by ship and later by train. After Barbara’s death in 1933, her daughters sold trees from the family’s lot for a few years.

“I’m a lover of history,” said Pennington, of Kewaskum, Wisconsin. “I’m always on the lookout for great stories.”

Pennington, who said it takes about a year to create each program, said she became enthralled with this story of triumph over tragedy.

“I was most interested in how the story kept on unfolding,” Pennington said. “I appreciated Barbara’s courage and determination to carry on with the family business, carry on as a merchant and carry on with the spirit of that ship. … Life can and does shine out of the darkness. Even in the midst of sadness, something valuable can exist and carry forward.”

Discover what drives a person to create multiple quilts about a blue chair, garden implements or unsung kitchen appliances. All is revealed in the exposé “Confessions of a Serial Quilter.” After speaking, Laura Wasilowski will display her small quilts (“mini-series quilts”) and offer a trunk show of hand-dyed fabric and threads from the Artfabrik dyers.

The drawing for the Heritage Quilters’ raffle quilt, “Threads of Friendship,” a show-and-tell and Valor Quilt presentation will follow.

The Gazebo Valor Quilters, a group of about 40 women from the northwest suburbs, launched its Quilts of Valor program in 2011 after a meeting at the McHenry County Historical Society and Museum. Since then, it has presented more than 1,300 quilts to veterans. Among the four being honored Wednesday are 91-year-old World War II radar technician Robert S. Jackson of Woodstock and Dale “Woody” Woodruff of Marengo, a helicopter crew chief who endured icy stares and rebukes while stationed in Georgia during the heart of the Vietnam War.

That, fortunately, has changed. And as a member of the Marengo American Legion Post 192’s honor guard, he continues to pay it forward.
“Somebody has to pick up the slack,” he said. “These guys have to be honored.”

I could not agree more.